Aneurysm of the thoracic aorta in mostcases occur in atherosclerosis, but the cause of the disease can be Marfan syndrome, syphilis or tuberculosis. The main risk factors are obesity, family history, high blood pressure and smoking.

The concept of an aneurysm of the thoracic aorta 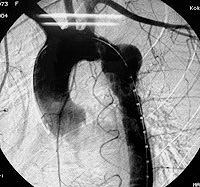 The aorta - is the largest artery in ourbody. Through her blood goes from the heart to all organs and tissues. Coming out of the heart, the aorta passes through the chest, where it is called the thoracic. After the aorta blood to the tissues and organs of the chest. Next, the aorta passes through the diaphragm, where it is called the abdominal portion. At the bottom of the abdominal aorta divides into two branches - the iliac arteries are responsible for the blood supply to the lower abdomen, legs and genitals.

Special saccular abdominal wall extensionaorta, which is caused by the thinning of its wall, called an aneurysm of the thoracic aorta. Approximately 25% of aortic aneurysm is located in the thoracic region. The fact is that with a rather strong pressure of blood on the weakened aortic wall, there is the expansion of its ballonoobraznoe certain portion thereof. The normal diameter of the aorta is equal to 2 cm. However, when the diameter of aortic aneurysm, may be stretched to a dangerous size. The danger of any portion of the aorta aneurysms is that it can occur that the bundle or even rupture, which leads to massive internal bleeding and death.

A special kind of aneurysms of the thoracic aorta - athe so-called dissecting aortic aneurysm. This type of aneurysm is usually associated with high blood pressure. Aortic dissection can spread through the aorta, thereby blocking blood flow to the legs, arms, kidneys, brain and spinal cord, and other areas.

The danger of any portion of the aorta aneurysms is that it can occur that the bundle or even rupture, which leads to massive internal bleeding and death.

Further, the aneurysm can contributethe formation of blood clots. These clots rush of blood flow to the organs, and can cause blockage of blood vessels, leading to severe pain, as well as to disruption of blood flow in the limbs and necrosis.

Occasionally an aneurysm may occur in bothaorta. Only 20-30% of hospitalized patients with thoracic aortic aneurysm survive. This again points to the importance of the earliest possible treatment of aortic aneurysms.

Only half of patients with thoracic aneurysmaorta observed any symptoms. Sometimes the patient may feel nothing at all. Severity of symptoms depends on the location of the aneurysm, its size, the availability of the bundle:

With significant amounts aneurysm cansqueeze the heart valves that causes the development of congestive heart failure. Symptoms bundle of thoracic aorta aneurysms may occur suddenly. For example, the patient can feel the strongest burning pain in the chest or back. Rarely, the patient may not notice any symptoms.

It is very important at the first sign of occurrence of aneurysms of the thoracic aorta consult a doctor immediately.

Researchers believe the main reasonthe development of this pathology of atherosclerosis. Normally, the inner wall of the arteries and aorta smooth and level. Atherosclerosis on its surface appear growths - atherosclerotic plaques. They consist of cholesterol, calcium and fibrotic tissue. Over time this process leads to a narrowing of the lumen of the arteries and aorta, and ultimately to the loss of their elasticity and the walls of weakness. Other risk factors for aortic aneurysm:

In some diseases it is also marked the risk of the inner wall of the aorta that leads to the development of aneurysm:

Less commonly, the cause of thoracic aortic aneurysm can be a trauma, such as falling or fast braking.

Methods of diagnosis of the disease

Most often found in the aortic aneurysmwhile a patient study procedures, such as ultrasound. If your doctor suspects you have the presence of an aortic aneurysm, he may recommend:

Treatment options for an aneurysm of the thoracic aorta

If the size of an aortic aneurysm is small, or it is notcause concern, your doctor may recommend a so-called watchful waiting, which means that every 6 months you will be conducting a survey to identify any changes in the size of the aneurysm. To do this on a regular basis either ultrasound or computed tomography or magnetic resonance imaging. Tomography - is a technique of X-stratified study of organs and tissues. It allows the physician to control the diameter of the aortic aneurysm. This method is used in aneurysms with a diameter less than 5 cm. If in addition, you suffer from high blood pressure, your doctor may prescribe medications that reduce it, thereby reducing the blood pressure on a weakened aortic wall. If you smoke, you should quit smoking. By itself, the aneurysm is not going anywhere. Therefore it is very important to constantly consult with your doctor, because over time, the aneurysm may reach dangerous dimensions, which is fraught with complications.

Treatment of aneurysms of the thoracic aorta dependson the localization of her size, as well as the disease that caused the aneurysm. For example, patients with Marfan syndrome require treatment before, unlike patients with the same aneurysm, but without Marfan syndrome. To date, there are two types of treatment of aneurysms: endovascular and open method. 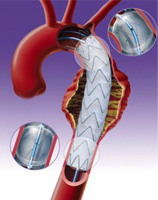 open surgery methodIt is that the surgeon opens the chest portion allocates aorta afflicted with an aneurysm, and replaces it with a synthetic graft in the form of a tube. Often, an aneurysm of the thoracic aorta combined with heart disease. In these types of complex aortic and valvular surgery performed on the heart and, depending on the situation.

After surgery, the patient is in the hospitalfor 6-7 days. In the case of aneurysm or complex in the presence of concomitant heart disease, lung or renal disease, a patient may require 2 to 3 months for recovery.

A more modern method of treatment of aortic aneurysms (andaorta not only) in the form of endovascular surgery such as stenting. The term "endovascular" means that the operation is carried out within the vessel by means of a special catheter which is introduced into the vessel lumen. This type of operation is minimally invasive. This means that only required to make a small incision in the groin area, through which the catheter is introduced for the operation surgeon. During operation ray image shooting is performed in real time, which allows the surgeon to control the process of the catheter in the vessel. Next, the surgeon introduces into the lumen of the aorta special device -stent. This cylindrically shaped wire frame which strengthens the wall of the aorta. The rehabilitation period after this kind of operation only 2 -3 days. However, after the surgery requires a fairly frequent radiological monitoring the condition and operation of the stent. Furthermore, it may happen that this technique will not fit, for example, if you have a renal pathology. It should be noted that the open operation is more acceptable in some cases.

Vessels under the supervision of a physician