Hemolytic disease of the newborn is a disease that is caused by incompatibility of the blood of the mother and the fetus for various antigens. More often it develops with incompatibility with the Rh factor.


Rh factor - is a special substance containedin human blood. It owes its name to an animal - a rhesus monkey, in which it was first discovered. It is proved that the lack of this substance in the blood of women can have a negative impact on the fate of her pregnancy.

The probability of rhesus

The probability of rhesus during pregnancy(Incompatibility between mother and fetus on D-antigen) occurs if the expectant mother is Rh negative and the future pope Rh positive and the child inherit Rh-positive gene from the father.

If the woman Rh-positive or both parents are Rh negative, Rh-conflict does not develop. 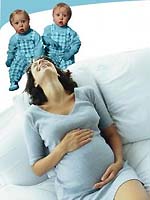 To understand why the body formedantibodies do digress. Antibody - a protein (plasma immunoglobulins) in warm-blooded animals and human blood cells of lymphoid tissue synthesized under different antigens (foreign agents). Working with microorganisms, antibodies prevent their reproduction or neutralize toxins secreted by them; they contribute to the production of the immunity, ie antibody works against the antigen. The process of immunization (sensitization) in the case of rhesus incompatibility can occur, starting with 6-8 weeks of pregnancy (it is at this period are found red blood cells of the fetus in the mother's blood stream); maternal antibodies directed action to eliminate fetal erythrocytes.

At the first meeting of the immune system of the futuremother with Rh-positive red blood cells of the fetus develop antibodies (immunoglobulins) class M, the structure of which does not allow them to cross the placenta; thus, these antibodies have no effect on the developing fetus. After the meeting in the mother's immune system generates "memory cells" that repeated contact (happening at the next pregnancy) produce antibodies (immunoglobulins), the G class, which cross the placenta and can lead to the development of hemolytic disease of the fetus and newborn. Once appeared, Class G antibodies remain in the body of a woman for life. Thus, Rh antibodies in the body of Rh-negative women may appear artificial or spontaneous abortion uterine or ectopic pregnancy after the first birth at birth Rh-positive baby. Rh sensitization is also possible, if a woman has ever held a blood transfusion without regard to the Rh factor. The risk of rhesus sensitization increases in subsequent pregnancies, especially in the case of interruption of the first pregnancy, bleeding during pregnancy and delivery, manual removal of the placenta, as well as delivery by caesarean section. This is because in these situations maternal bloodstream falls large number of Rh positive fetal red cells and, therefore, the mother's immune system reacts to form a large number of response of antibodies.

According to medical literature, after the firstImmunization pregnancy occurs in 10% of women. If at the first pregnancy, Rh-immunization has not occurred, then a subsequent pregnancy Rh-positive fetus probability of re-immunization is 10%. Rh-antibodies circulating in the blood stream of the future mother, do not harm her health, but penetrate through the placenta, can pose a serious hazard to the fetus.