Home›Endocrinology›Causes of development of acromegaly

Causes of development of acromegaly

Acromegaly is a rather rare disease associated with one of the most amazing glands in our body,.BUT. Bulgakov - hypophysome. It is he who is to blame for the development of the disease. Read more about why acromegaly occurs, read in the article.


The name of the disease acromegaly comes from two Greek words «Akros» - The limb I «Megas» - big, that is, the disease at which the limbs increase. Acromegaly is a disease due to excessive production of growth hormone for a long time.


A little about the hypophysies 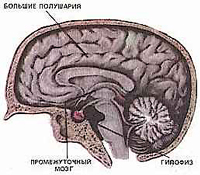 Growth hormone is produced in a pituitary. The pituitary gland is a small iron (no more than 1 cm), which is located at the base of the brain, in bone excavation called «Turkish saddle», and produces vital hormones. Growth hormone in children provides the processes of growth in the length and formation of bones and muscles, in adults controls metabolism, including the exchange of carbohydrates, fats, as well as water and mineral substances. In addition to the growth hormone (which is also called a somatotropic hormone), the pituitary is producing:

Control over the work of the pituitary gland is carried out by another part of the brain, which is called the hypothalamus.

In a healthy person, the content of growth hormone during the day is not equally at different times of the day, but is subject to certain fluctuations. During the day, alternation of episodes of reducing and increasing the number of blood growth hormone, with maximum values ​​in the early morning clock. With acromegaly, not only the increase in the content of the growth hormone is noted, but also violates the normal rhythm of its discharge into blood.


The mechanism of development of acromegaly

Military cells that produce growth hormone, for a number of certain reasons «Eascay» from under the regulatory effect of the hypothalamus and begin to multiply faster and more actively produce growth hormone. The continued growth of these cells leads to the formation of a benign pituitary tumor (the so-called «Adenoma pituitary gland») which may in some cases reach sizes to several centimeters, that is, be much more than normal pituitary sizes. Unchanged pituitary cells at the same time can be squeezed or even collapsed.

In most patients with acromegaly, the pituitary tumor produces only growth hormone, however, about a third of patients and excessive products of another hormone pituitary - prolactin can also be celebrated.

Acromegaly people are sick of any age, although the greatest number of patients are ill at the age of 30-50 years. The disease is equally common in men and women. Inheritance is not inherited. In this case, the disease features, as well as brushes and feet disproportionately increase. The disease affects the internal organs: under the acromegaly, the work of liver and kidney, heart and pancreas is disturbed. If the adenoma of the pituitary is developing in childhood, when the bone is still going, it develops gigantism. In this disease, human growth is rapidly for 2 meters.