What is chemotherapy? The advantages of her and efficiency in the treatment of cancer. Let's try to figure it out.

Chemotherapy is the main type of drug
Cancer treatment. There are a number of other methods of treatment that, strictly
speaking, are also chemotherapeutic, such as hormonal
Therapy and immunotherapy, but the term «chemotherapy» specifically means
Cytotoxic treatment, T.E. violating the division process
cancer cells resulting in new.

Preparations are injected into the bloodstream, where they circulate throughout
Organism. This consists of a huge advantage of chemotherapy before
Other Cancer Treatment Methods. Often unable to remove all cancers
Cells through surgical intervention or radiation therapy,
which are local methods, t.E. Their action is directed only to
Some one specific area of ​​the body. This is explained by
A certain number of cells can be separated from the primary tumor and
Bloodstop falls into one or another part of the body, where he begins to grow,
forming secondary tumors or metastases.

Since chemotherapeutic drugs are moved in the same way,
They can hit these remote cells and secondary tumors in any
Plot of the body. First experience in the use of chemotherapeutic
methods whose action was based on this principle was
Antibiotic therapy with infections. Antibiotics destroy bacteria,
causing an infection where they would be in the body. However,
the bacteria differs very different from normal
organism cells, which makes it possible to create antibiotics that
purposefully affect bacteria, without harming normal
cells. Meanwhile, cancer cells differ from normal very
negative. They lost the mechanism controlling their growth and
Reproduction, but otherwise most chemical processes,
taking place in the cells of both types, similar.

Consequently, drugs,
affecting cancer cells, apparently damage and normal
Cells. Although cancer cells are relatively damaged compared
with normal cells of the body and less capable of
self-healing. The use of chemotherapeutic methods is based on
accounting for this defectiveness. Treatment usually lasts from one to several
days, then take a break for a few weeks. At that time
Normal organism cells are restored, while cancer cells
Only negative are restored. Subsequent cycles
Medical treatment is aimed at further destruction of cancer
cells, while normal cells will
continuously recover.

How effective is chemotherapy?

Some types of cancer are healing through only chemotherapy. but
For most types of cancer, it is still impossible, and medication
Treatment in such cases is carried out in order to control the development
diseases and its deterrence, as well as to relieve
Symptoms. The main reason explaining why with
Chemotherapeutic methods can not be healing most of the types of cancer,
It is that either cancer cells acquire resistance to
preparations or they have partial or complete resistance to them
from the very beginning. For example, if with any cancer 99% of cells
Sensitive to medicines, chemotherapy will eliminate 99
% defeat, but will not have any influence on the remaining 1% cells,
who will continue to grow. Resistance to therapeutic preparations and incomplete
The destruction of cancer cells are essential obstacles to
The effectiveness of treatment and became the subject of intensive scientific
Research. Cancer cells acquire stability to one or another
drug due to the development of biochemical processes allowing
overcome the damage caused by the cells by this drug. One of the paths
solutions to this problem consists in the appointment of several different
preparations, each of which has a specific devastating
Cancer. Development of several protection mechanisms at once
cells are more difficult, therefore the likelihood increases
Continuous tumor destruction. This method of chemotherapy led
to a significant increase in cure indicators in some species
cancec.

Another way to overcome sustainability is to appoint
significantly higher doses of chemotherapeutic. Problem in
that such high doses cause serious damage and normal
cells, especially bone marrow responsible for blood formation.
Similar high doses are justified only in cases where possible
Bone marrow or stem cell transplant. The larger the tumor
More likely to preparations for its resistance. Therefore, if primary
The tumor is removed surgically and there is a danger that a small
The number of cancer cells has already spread to others
parts of the body, then in order to avoid relapse, when the treatment will be
It is already more difficult to conduct, immediately after the operation, you can proceed to
Chemotherapy to destroy all the remaining cancer cells. Such
The approach is called adjuvant chemotherapy.


How chemotherapy is carried out?

Chemotherapeutic
Preparations can be administered orally (through the mouth), more often
intravenous (intravenous method). The purpose of such treatment is to
introducing active anticancer agents in the bloodstream by which they
are transferred to cancer cells, wherever they were. Sometimes
Chemotherapeutic agents are injected directly into specific
plots of the body, for example, in the cerebrospinal fluid or
Right intestine. In this case, the goal of achieving high
Concentration of the drug in this place. The easiest method of administration
drugs - oral in the form of tablets or liquid, which gives
the ability to take them at home without the help of a medical sister or doctor.

However, this is a less reliable method compared to injections, since
no confidence that when receiving each dose in the body
The same amount of medication will be absorbed. Most
Increased way is the introduction
chemotherapeutic drug in Vienna or by injection or
More often drip method. Typically, such treatment should be carried out in
hospital outpatient or stationary. Every dose of medicine is introduced into
The period from one to several days at intervals of 1-4 weeks (in
Depending on the treatment regimen) with a total number of courses from 4 to 8. Sometimes
Low doses are continuously introduced, for which they use a small portable
pump. On it, drugs are poured into the body throughout
several weeks or even months. Pump attach to the belt or wear
in bag, and patients can engage in their usual activities.

Chemotherapy can cause various side effects, and in
past they were very heavy and treatment in many cases caused
Unpleasant emotions and poorly transferred. Now chemotherapy has changed
beyond recognition. New drugs cause fewer side effects, and
At the same time, they are often more effective than old.

except
Togo, much more advanced methods for relief and
Warnings side effects. To three most common
The side effects of drug treatment during cancer are nausea and
vomiting, hair loss and bone marrow. Nausea and vomiting in
The past were the most painful reactions to chemotherapy. One of
The most important modern achievements in the treatment of cancer - the creation of a very
effective means against nausea (antiemetic drugs). They are
many cases can eliminate nausea, and now practically not
There are situations when patients undergoing chemotherapy would suffer
indomitable nausea or vomit. Because the
Chemotherapeutic agents have also become better and often
cause less unpleasant sensations, many patients pass the whole course
chemotherapy without suffering nausea or vomit. Hair loss
observed when applying some, but not all chemotherapeutic
drugs. It may be no more than minor loss or
hair thinning, but sometimes comes full baldness, and not
Only on the head, but also on the rest of the body. 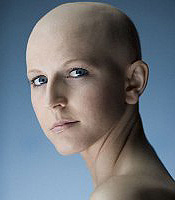 Similar reaction -
A very painful aspect of cancer treatment, as people are difficult
adapt to such a change in appearance, which except
other things may probably be perceived as quite bright external
manifestation of this disease. Many people wear wigs or
cover your head with a scarf or hat.

Hair loss - only temporary
phenomenon, and immediately after the end of treatment, they always grow with usual
speed. The impact on the bone marrow is due to the fact that its cells
Especially sensitive to chemotherapeutic drugs. Bone marrow
Products blood components - red blood cells, leukocytes and platelets.
When the number of these cells is reduced as a result of damage under
the action of cytotoxic means, a number of side
Effects: a sense of fatigue and weakness as a result of anemia caused by
erythrocyte failure; susceptibility to infections due to low
leukocyte levels; bleeding and hematomas as a result of shortage
Thrombocyte.

All these side effects can be largely
control, so in the course of medication treatment follows
regularly conduct blood tests in order to verify levels
specified cells, as well as identifying and treating certain violations.
Anemia is treated by blood transfusion. If leukocyte levels
Low or it seems likely to increase their quantity
You can resort to growth factors injections. Transfusion
platelets (similar blood transfusions, but only in this case
It is about alone platelets) can be done at low levels of these
cells. Now the development of new platelet growth factors for
treatment and prevention of bleeding due to their low content.

Diarrhea is often observed when applying some, but not
All chemotherapeutic drugs. It can be easily and efficient
treat ordinary drugs selling in a pharmacy. With severe form
Diarrhea can be suspended by chemotherapy for a while or reduce dose
chemotherapeutic preparation while diarrhea is not
stop. Fertility. Some chemotherapeutic agents
can influence male fertility, reducing the amount of spermatozoa
in seed liquid and leading to infertility that sometimes wears
Permanent character. Chemotherapy can also affect women's
ovulation, leading to temporary and constant infertility. Before the beginning
Medical treatment should be discussed with a doctor related
With fertility questions so that preventive measures can be taken.
Men can offer conservation of sperm envisaged
storing the samples of their seed fluid in the frozen state on that
case if they plan to have children in the future. Women's storage
egg cells is currently the subject of experimental
studies and may well be possible. People suffering
infertility as a result of treatment, counseling and
moral support to help them reconcile with their
condition.

Women in which treatment causes constant menopause,
Can be carried out replacement hormone therapy for weakening
symptoms that can be very heavy. Sex life.
Any reason to refuse sexual life in
Medical treatment time does not exist, although because of others
Side Effects The well-being of patients may not be good enough
for this. Since the effect of chemotherapy for fertility is somewhat
vaguely and unpredictable, it is recommended to always resort to
or other contraceptive in the process of treatment and some
time after its end, regardless of who from partners it
It is carried out because during this period there is a possibility of conception.
Undergoing chemotherapy men should think about the use
condoms because women sometimes complain about sperm
acute pain and burning sensation.

Thanks to the achievements of recent years associated with the quality of themselves
drugs, methods of their introduction and ways of relief or
Warning side effects, chemotherapy has become much less
painful than it was 10 years ago. Now doctors often have
hear that patients transfer it much easier than expected.
Nevertheless, it still causes unpleasant emotions and strong
concern why many people need support from
his family and friends who would help them cope with problems and
preserve a positive attitude towards what is its
Rod Marathon Distance in the Treatment Process.

Currently
Numerous scientific research and clinical are continuously underway
Tests dedicated to the creation of more advanced chemotherapy methods
Almost with all types of cancer. The most striking results were obtained in
Studies to develop effective methods of combining chemotherapy
with other types of treatment, such as radiotherapy and surgical
interventions aimed at cure or extension of life
In situations in which it would be impossible earlier.

The side effects of radiation therapy