Today, the breast cancer is the main cause of women's death aged 35 to 54 years compared to other oncological diseases. The peculiarity of this disease is that in the early stages it rarely causes anxiety, and later - poorly treatable.

Russia annually registers about 46 thousand cases of breast cancer. Women's mortality from this type of cancer is in third place after the diseases of the circulatory system and accidents. At the same time, around the world, including in Russia, the incidence of breast cancer is steadily growing.

According to the statistics of the oncological scientific center, the RAMS in the last 20-25 years the incidence increased by an average of 40-50%, and in some regions halved. In addition, breast cancer noticeably youtells: often cases of the disease of thirty-year and even twenty-year-old women.


Causes of the disease

The reason for the appearance of cancer cells is mutations in normal breast cells, under the action of carcinogens, genetic material in cells changes. Factors affecting the occurrence of breast cancer, several: impairment of menstrual cycle, abortion, lack of lactation, violation of the activity of the thyroid gland, violation of the adrenal operations, etc. A significant role is also played by an unfavorable environmental situation and unfavorable heredity.


How does the disease manifest

The main manifestations of breast cancer in the early stages is the presence of a compacted node in the chest, in the later – Changing the shape of the mammary gland, the patch of the nipple, the tension of the skin.

Through blood, cancer cells are spread throughout the body, giving rise to new tumors - metastasis. Most often breast cancer metastasizes in lungs, bones, liver, brain. Their defeat leads to death.

Doctors recognize that the effective ways of treatment of breast cancer of extreme stages do not exist. However, if the tumor is detected at the initial stage and measures are taken for its treatment, the probability of complete recovery is sufficiently high.

The problem lies in the fact that early stages of cancer pass almost unnoticed, to detect only the resulting tumor is extremely difficult. Therefore, the main efforts of oncologists are aimed at creating and developing effective methods for the early diagnosis of breast cancer. 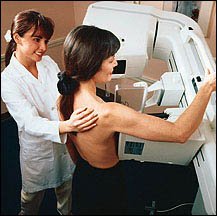 Until recently, the only method to detect small breast tumors was mammography – X-ray of the gland produced on a special machine. Unfortunately, this method has a number of significant flaws.

First of all, it is a harmful effect of ionizing irradiation of a mammograph: Doctors do not recommend passing more than one x-ray survey per year. In addition, Mammography does not always give a reliable result – The accuracy of the diagnosis often depends on the ability of the doctor to decipher the picture and is ineffective in the diagnosis of breast cancer in women younger than 50 years.

Nevertheless, the mammography is considered the most effective means of diagnosing cancer in the early stages: conducted in the mid-1990s in Europe. Studies show that in time the mammographic procedure is carried out to significantly reduce the mortality rate.

Other diagnostic methods are thermography, ultrasound examination (ultrasound) (as opposed to mammography, this method can be used repeatedly for a short period of time), biopsy.

The thermography is based on the possibility of registering its own infrared radiation of the body. Heat radiation over malignant tumor intensively than radiation of surrounding tissues. But the correct reading of the thermogram complicates the fact that the location "hot" and "Cold" Zones are determined by the individual characteristics of the structure of the breast and depends on the age of a woman.

Biopsy includes several different species whose essence is taking from the sealing zone of biological material and studying it for the content of affected cells.

Despite the serious effectiveness of the listed diagnostic methods, do not forget about the easiest and most affordable – self-examination, T.E. inspection and feeling of the mammary glands. Oncologists and mammology recommend making self-examination once a month, in the first week after the end of the month and once in half a year at a specialist. This measure allows you to reveal a tumor in the early stages and in case of detecting certain signs – Seals, both visible and only feeling, skin retracting, abnormal discharge – become a signal to appeal to a doctor.