Home›Oncology›What to do with the stomach cancer suspected

What to do with the stomach cancer suspected

Patients with stomach cancer rarely appear symptoms in the early stages of the disease. For this reason, the gastric cancer is difficult to diagnose in a timely manner.

Symptoms of stomach cancer can be as follows:

Of course, many of these symptoms can be caused by other diseases, and not cancer. However, if these symptoms arose and they continue for a long period of time, it is necessary to urgently consult a doctor, especially if you have for 50 years and you have the risk factors for the development of gastric cancer. 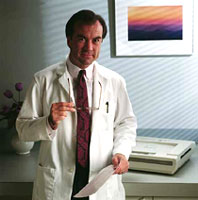 If you have a reason to suspect a gastric cancer, then you need to immediately consult a doctor who, talking to you, will hold the necessary examination. The doctor examines the stomach and check if there is a tumor there. In addition, it will determine whether the liver is not increased, which may mean its defeat with the tumor process.

Endoscopy stomach. With this procedure, after anesthesia, a thin flexible tube with an illuminator (endoscope) is introduced through the mouth and the doctor examines the esophagus, the stomach and the initial portion of the small intestine (12 pans). In the presence of a suspicious area, a small piece of the stomach mucosa (biopsy) is taken for microscopic examination.

Contrast study of the gastrointestinal tract. The patient is given a barray, which covers the mucous membrane of the esophagus, the stomach and the initial portion of the small intestine and several radiographs are performed. After that, if there is an indication, it is introduced through the air tube in the stomach so that the barium spread over the mucous membrane of the thin layer. This technique makes it possible to detect even very minor changes in the stomach.

Ultrasound Research (Ultrasound). At the same time, the method uses sound waves to determine the state of the internal organs. Ultrasound is sometimes carried out in combination with the introduction of a special probe through the nose or mouth in the stomach, which makes it possible to estimate the prevalence of the tumor inside the stomach and in the surrounding fabrics and lymph nodes.

Computed tomography (CT). In this method, a special X-ray technique is used, which gives the ability to take pictures at different angles. This obtains detailed information about the organs and tissues. It turns out how common stomach cancer and which organs (for example, liver) are amazed. With this method, you can perform aiming biopsy of a suspicious area with a subsequent study.

Positron-emission tomography (PET). Radioactive glucose is introduced into the Vienna of the patient. It concentrates in the tumor, and the scanner detects the zones of its accumulation. The method allows you to figure out the spread of cancer beyond the stomach and clarify the stage of the disease.

Magnetic resonance Tomography (MRI). This method, like CT, allows you to explore the organism in layers, but at the same time powerful magnets are used instead of radiation.

Radiography of the chest makes it possible to identify the damage to the lungs with the tumor process.

Laboratory research. A complete blood test is carried out to identify anemia (Malokrovia), and also examines the feces for hidden blood.

What is - screening of stomach cancer

Screening is a previously active detection of cancer at an early stage, when there are no symptoms of the disease. The main method of screening cancer of the stomach is the fulfillment of the regular (1-2 times a year) of gastroscopy, at which prematubic states and small tumors are detected, which are not accompanied by symptoms.

There are various methods for the treatment of gastric cancer. The choice of the treatment method depends on many factors. Of course, the location and stage of the tumor are important factors. Other factors include age, general condition and personal wishes.

The main methods for the treatment of stomach cancer are: operational, chemotherapy and radiation therapy. Often the best approach to treatment can be the use of several methods.

Currently, the operation is the only way to cure a gastric cancer. If there are 0, I, II or III stages of the stomach cancer, as well as relative to a satisfactory condition, an attempt is made to complete the tumor removal.

Even if cancer at the time of treatment is distributed and cannot be completely removed, the operation can help prevent bleeding from a tumor or contribute to the passage of food through the intestine. This type of operational admission is called palliative, t.E. Performed in order to relieve or prevent symptoms, and not in order to cure cancer.

Under chemotherapy implies the use of antitumor drugs for the destruction of tumor cells. Typically, drugs are prescribed intravenously or inside, t.E. Through Roth. As soon as the drug enters the bloodstream, it spreads throughout the body. Chemotherapy is usually applied to the impact on the common tumor.

Chemotherapy can be the main method of treatment of gastric cancer, when the tumor has already spread to remote organs. This method of therapy is applied before or after surgery. Experience has shown that chemotherapy can ease the symptoms in some patients with stomach cancer, especially when cancer has spread to other areas of the body. There is an indication that chemotherapy in combination with radiation therapy may delay the recurrence (refund) of the disease and extend the life of patients with a common process.

In this method, the rays of high energies are used to destroy or reduce the tumor. Exposure can be outer or using radioactive materials administered directly to tumor tissue (internal or implantation). In the gastric cancer, outdoor irradiation is usually applied.

From side effects of radiation therapy It is necessary to note minor skin reactions, nausea, vomiting, liquid chair or increased fatigue. These symptoms usually pass a few weeks after the cessation of treatment. Irradiation can aggravate the side effects of chemotherapy.