Home›Pediatrics›Kawasaki syndrome - the reason for the sudden death of children!

Kawasaki syndrome - the reason for the sudden death of children!

What do you know about kawasaki syndrome in children? This disease proceeds as a viral infection, but accompanied by the defeat of the coronary blood vessels. The consequences of the illness may appear in adolescence, lead to myocardial infarction and sudden death of the child. 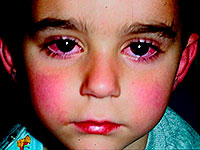 Cavasaki syndrome is not interested in Japanese name, this disease is most common in Japan, as well as in East Asian countries. The disease that has similar symptoms similar to viral infection is accompanied by the defeat of the coronary vessels of the heart. Despite the recovery, the consequences of the illness can appear in adolescence, lead to myocardial infarction and the sudden death of the child.

Reason of increased interest in Kawasaki syndrome — In the cooking passion for adolescent sports. It would seem that in this bad? However, the deaths of children in the last time, the deaths of children are forced to think about how far from Russians «Japanese problem»? After all, the reason for sudden death can wonder that the child in childhood moved Kawasaki syndrome, which began the beginning — Vascular pathology.

The origin is not clear

Despite the fact that Kavasaki syndrome was described for a long time, in 1961, the reasons for it still remain unclear for scientists. Seasonality and cyclicity of the disease give reason to assume that it has a viral nature, but its pathogens are not found, which means that prevention measures are not developed.

Most often, Kawasaki's syndrome amazes children from 2 months to 5 years, and the most difficult complications are developing in kids to 1 year old. Boys are two times more often than girls, sometimes family flashes of disease are recorded.

Under the mask of ARVI

Cavasaki syndrome manifestations are largely similar to the symptoms of acute respiratory viral infection, scarletin or rheumatic fever — This greatly complicates the diagnosis of the disease, because there are no specific laboratory methods at the disposal of doctors.

The disease begins with lifting body temperature up to 39-40 0C, which stays long, to 12, sometimes up to 36 days, periodically decreased to 38-38.50. Fever dedicates the baby, it becomes a bellish, drowy, inhibited, complains of pain in the stomach. His lips, become bright red, dry, swelling cracked, eye conjunctive and sclera are covered with a grid of extended blood vessels. As for scarletin, hyperemia of the mucous pharynx, oral cavity and language.

More than half of children increase lymphatic nodes with one or on both sides of the neck. During the first day, bright red rash appears on the child's body on the body, especially it is located in the field of skin folds and in places of contact with a diaper or clothing. Hand and foot brushes swell and become red from rash. For 10-20 days fingers, palms, feet are beginning to peel, the skin comes off with layers, like during scarletin, which makes it difficult to diagnose.

Kawasaki syndrome may be accompanied by pains in the joints, mastitis, vulvit, otitis, jaundice, diary. The defeat of the soft shells of the brain leads to the appearance of headaches
and rigidity of the occipital muscles.

The disease is striking vessels

The main danger of Kavasaki's syndrome is the defeat of blood vessels. Scientists found that during the disease, the inflammation of the arteries is developing, which leads to the protrusion of their walls and the formation of small and large aneurysms. The slowdown in blood flow in the formed aneurysms and the presence of inflammation is predistened to the formation of thrombov, and their separation entails the blockage of the vessel and the development of heart attack. The most dangerous are the damage to the coronary arteries, threatening to grow into a myocardial infarction, with a large vessel thrombosis, the heart breaks and the child dies. The earlier treatment be started, the smaller the risk of formation of large aneurysms and more chances of a cure, small aneurysms can disappear, the vessels are restored during the year, but in some cases the heart lesion makes itself felt many years of heart disease and may cause sudden death.

How not to miss kawasaki syndrome?

The diagnosis of Cavasaki's syndrome is quite difficult, especially given the fact that our doctors are very rarely dealing with this disease, their alertness is naturally reduced. Parents of children often did not even hear about such an age. Nevertheless, let's try to clarify.

The diagnosis of Cavasaki's syndrome is based on its symptoms, so attentive observation of the child is enough not to miss the time.

When it is worth thinking about Kawasaki syndrome?

In the presence of these signs of the child, it is necessary to show the pediatrician, rheumatologist and cardiologist.

How is Cavasaki syndrome treated?

First of all, we note that the early start of treatment allows you to prevent damage to the coronary arteries and practically negates the risk of infarction and other heart disease. Because the pathogen is unknown, there is no specific therapy. Treatment is based on the introduction of high doses of immunoglobulin and aspirin. Immunoglobulin helps the body to deal with the intended infection, and aspirin reduces the temperature, warns the development of arteitis and aneurysms, prevents the formation of blood clots. Sometimes doctors resort to drugs reduced blood clotting.

Aspirin has to give a child for a long time, for several months, gradually reducing his dose, it allows you to protect the baby from the complications of Kawasaki syndrome.

Throughout the treatment, echocardiography is carried out, darling, coronary artwork, allowing to control the condition of the heart.

Almost all children with Cavasaki syndrome are recovering, all clinical and laboratory signs of illness disappear about the 6-10th week, but some in this period are complications of the disease and a death rate is possible for the fore.