Home›Therapy›Aspirin - for seven troubles one answer

Aspirin - for seven troubles one answer

Aspirin can be found literally in every home first aid kit. This cure for a cold helps to cope with fever, headache, fragmentation in the joints and muscles. But it turns out, this is not all that is capable of our favorite acetylsalicylic acid.

It is unlikely that you can find a person who would have taken aspirin at least once in his life. Medicine whose history has more than a hundred years, still remains the most popular in the pharmacy network. Every year more than 80 billion aspirin tablets are sold in the world. It helps people with colds and ramps, protects the heart and vessels. And these abilities of the drug are not limited. Scientists regularly reveal the new properties of aspirin and offer to use it for the treatment and prevention of various diseases.

The origins of the creation of aspirin lie in ancient times. The first mentions of the medicinal properties of willow, from the cortex of which the substance was first obtained — The progenitor of modern aspirin, found in ancient Greek papyrus, dating from 1534 g. to N. NS. In those days, people used willow preparations as tonic.

In 1828, the Munich University processor Joseph Bachner allocated the active substance from the bark and called him «Salicin», And after 10 years, the Italian scientist Raphael Piria received salicylic acid from it, which the doctors began to use as antipyretic, anesthetic and anti-inflammatory agent. True, patients were unbelievable new medicine for his disgusting taste and severe side effects.

The breakthrough in the history of the drug was performed in 1859, when the acetylsalicylic acid was synthesized, and later, in 1897, when Chemist Felix Hoffman from Bayer developed a steady, convenient form of this substance, which became the main active component of the new medication called «Aspirin».

The first party aspirin was released by Bayer in 1899, and for the next fifty years, the drug was used as an antipyretic, anti-inflammatory and anesthetic.

The first thing comes to mind when mentioning aspirin, — This is a cold. Acetylsalicylic acid, acting on the center of thermoregulation, quickly and effectively reduces the body temperature; affecting the centers of pain sensitivity, eliminates headache, lubrication in the muscles and joints; intervening in the synthesis of prostaglandins, helps to fight inflammation of mucous respiratory tract. Aspirin does not kill viruses and microbes, but relieves the basic symptoms of the disease, facilitating the patient's condition.

If you got sick, tooth or knee, Aspirin will facilitate your suffering, it happens enough to stop neuro-expressed pain syndrome.

Aspirin is shown in rheumatoid arthritis and deforming arthrosis. It reduces inflammation in the joints, eliminates their swelling, increases their mobility.

Aspirin for heart and vessels 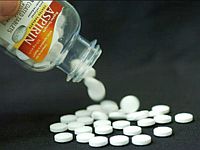 In 1967, scientists have found that against the background of the admission of aspirin increases the time of bleeding, in 1971 they scientifically confirmed the effect of acetylsalicylic acid on blood coagulation and found that small doses of matter are able to prevent the formation of blood clots. Since then, aspirin has become actively used in the treatment and prevention of diseases of the heart and blood vessels associated with the blockage of blood vessels by blood closures and the subsequent circulatory disorder.

Atherosclerosis, angina, myocardial infarction, stratum entrants — This is not a complete list of diseases in which aspirin not only treats, but also helps to avoid formidable complications.

Aspirin in small doses is appointed to those who have a high risk of developing cardiovascular diseases: those whose age is over 40 years old who smokes, abuses fat food, leads a sedentary lifestyle, who have close relatives suffer from heart and blood sacchalter diseases and diabetes. According to research data, acetylsalicylic acid reduces the total risk of developing myocardial infarction by 30%, stroke — by 25%, sudden heart stop — by 17%.

Other applications of aspirin

Unfortunately, the effect of acetylsalicylic acid on the human body is not limited to only positive effects. Like any medicine, aspirin has a side effect.

Aspirin — Simple, affordable and effective medicine that requires a serious relationship. Self-medication can lead to grave consequences, therefore, departing once again in the pharmacy for acetylsalicylic acid, do not forget to consult with the doctor.