Anomalies of the structure of the kidneys

What is a kidney polycystic? How to manifest and how to treat polycystic kidney? Read this article.

Anomalies of the structure of the kidneys

The kidney abnormalities include:

This anomaly lies in the congenital decrease in the kidney in size with the simultaneous defect of the development of kidney tissue and a decrease in renal function. There are two forms of kidney dysplasia:

Rudimentary kidney – This is the body that has stopped in its development at an early stage of the embryonic period. In this case, instead of the kidney, a small sclerotic mass is found in size 1 – 3 cm or even less. When studying in it, remnants of underdeveloped gloms and tubules.

Multi-Russian kidney — Rare anomaly is quite enough. Its frequency is about 1% of all kidney development anomalies. It is usually one-sided and more often found in boys on the left side.

With this anomaly, the whole renal tissue disappears and cysts are found instead. Ureter usually does not have a lumen, or is missing at all. Kidney consisting of one cyst is increased in size. It can be patched through the front abdominal wall. It has an uneven surface. Cysts are cavities filled with liquid.

With one-sided multi-time kidney, the treatment is only operational. Sometimes operations have to be carried out in an emergency, if the wedding suppuration is developing or cysts. Kidney with multistosis remove.

Polycystic kidney — It is often found quite, has a hereditary nature and is a severe illness. Polycystic kidney always bilateral disease. At the same time, normal kidney tissue is replaced by multiple cysts of various sizes. Cysts occur if the formation of renal tubules is disturbed. Some of them end blindly, filled with urine expand, forming bubbles – cysts. It is said that such a kidney resembles a bunch of grapes.

Manifest Polycystic kidney blunt pains in the lumbar region, fast fatigue during exercise. Patient has a polyurium (frequent, abundant urination), thirst. Soon the renal failure occurs. Typically, arterial hypertension arises and cardiovascular disorders are joined. Hematuria (blood in the urine) is found in the urine. Stagnation of urine in cysts contributes to the development of infection in the kidney and the pyelonephritis is very often developing, which contributes to the acceleration of the development of renal failure.

Depending on the rate of development of chronic renal failure, three stages of kidney polycystic.

The first stage — renal failure is compensated by the capabilities of the body. It is manifested by stupid kidney pain. In small common manifestations (weakness, periodic headache, fatigue during exercise) and a minor violation of the kidney.

Second stage or stage of subcompensation. When the compensatory capabilities of the body are gradually depleted and dry in the mouth, thirst, nausea, headache, enhanced arterial pressure.

Third stage – Stage decompensation. There is a constant nausea, vomiting, general deterioration of well-being, thirst. Kidney function sharply reduced. In the blood accumulates a large number of exchange products (urea, creatinine), which the kidneys are not able to remove from the body. 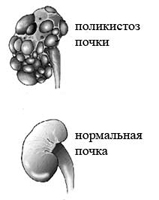 Diagnosis of kidney polycystosis exercise on the basis of patient complaints. When tugged through the front abdominal wall, enlarged bug sides on two sides. Polycystic kidneys can achieve very large sizes and can even be visible when inspected, discovering through the abdomen wall, especially in children. Erythrocytes and leukocytes are found in urine tests, the share of urine is reduced and does not change throughout the day. In the blood tests, anemia (decrease in the number of red blood cells) is found, an increase in urea and creatinine is detected in biochemical blood test. Ultrasound examination detect increased kidney with a large number of cysts of different sizes. On the excretory urograms, stretched and deformed lochank, due to the compression by its cysts. With a contrast study of the kidney vessels, zones are found in which there are no vessels and a sharp decrease in the number of small vessels in the kidney tissue.

Treatment of polycystic kidney. The possibilities of conservative treatment of kidney polycystosis are limited. It is aimed at eliminating infection in urinary tract, fighting anemia and increased arterial pressure. In pronounced pains, the detection of large cyst, the suppuration of the cyst is sometimes carried out operational decompression of polycystic kidney. Cysts puncture and remove the contents of the cyst. This operation is called ignipool. Now conduct a percutaneous puncture of the cyst, without performing an open operation on the kidney. With the rapid progression of the symptoms of renal failure, the prognosis is unfavorable, the patient constantly needs hemodialysis. Often the kidney transplantation is often needed.

With this pathology, the kidney is characterized by the presence of congenital multiple small cysts in renal pyramids. Usually this pathology is found on both sides. More often she meets in men. Sometimes the pathological process may only be limited to part of the kidney. In children, this disease can flow for a long time without any manifestations.

Manifestations of spongy kidney can be pain in the lower back and hematuria.

Diagnosis of spongy kidney Based on x-ray data. At the same time, the shadows of small petrifists are determined on radiographs of the kidneys in the projection of the kidney brainstant.

With an excretory urogram in the area of ​​kidney papillas, a lot of small cavities in the brainstant are usually visible, which makes the image similar to the pores of the sponge (hence the name).

Spring kidney treatment Required only in case of complications. With total hematuria, activities are carried out to stop bleeding. When attaching pyelonephritis – Appropriate antibacterial treatment.

In case of unsuccessful conservative treatment with continuing bleeding or non-boring acute purulent pyelonephritis, nephrectomy is usually carried out.