From gastritis to ulcers

Incorrect nutrition and constant stress - the usual attributes of today's life and the main factors leading to the emergence of a number of diseases of the gastrointestinal tract, the most common of which is, of course, gastritis and ulcers. 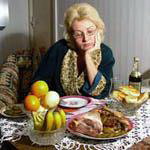 Nowadays gastritis — Inflammation of the gastric mucosa — It is found in one form or another, overwhelming majority of the urban population over 30 years. And what is here, actually, wonder if our whole life — This is one solid «Gastriticovocy» factor? Stresses and crazy rhythm of life, poor-quality food, an abundance of preservatives and unpretentious flavoring additives, abuse of sharp seasonings, carbonated drinks, alcohol, violation of the food intake chart and the snacks of snacks on the go (hamburgers, hot dogs, chips). With this situation, gastritis is inevitable. And if you continue to fall on your own health, then you can «earn» And something worse.

Especially cautious it is necessary to be the one who has a non-normalized working day. Representatives of such professions often do not have time to eat during the day, neglecting a full lunch and preferring to do that a glass of tea with a sandwich, then visiting the dubious quality of eatery.

Another group «Gastriti risk» — Those who have for a long way to sit bent bent, — Chauffs, for example, or office workers. The abdominal cavity is squeezed from this, blood flow and secretory activities are broken in it. This leads to a deterioration in the work of the gastric mucosa and, naturally, to the development of gastritis.

Susceptible to this disease and nervous, unbalanced, too active people. Any hassle causes them increased highlighting of gastric juice. The acidity in the stomach increases sharply, and, if regularly nervous, gastritis does not have to wait long.

Most often, gastritis develops gradually, for a long period of time. Symptoms at the initial stage sufficiently scarce: weak pain, silent, feeling of gravity in the stomach, sometimes — Open or heartburn. Drank the tablet, sat half an hour calmly — and order. Then, sometimes years later, the symptoms are growing: and the pain is already quite tangible, and it sick is stronger, and the tablets do not really help something. Usually it is at this stage a person still decides to contact a specialist. Although the moment is already, you can say, missed.

The forecast for recovery during gastritis, of course, is favorable, with the exception of completely launched cases, but the course of treatment will now last much longer. And turning the patient at the initial stage of the disease, one could do «Small blood», For example, just a little adjust the food diet and a meal schedule. But so we are accustomed — run to the doctor only when at all «Potret».

In the prevention of gastritis, the main-rational nutrition. The rules of its elementary and banal to the impossibility: to establish a clear schedule of food intake and try to stick to, do not overeat, do not abuse sandwiches, hot dogs and other «Fast food», Carefully treat spices, it is important to reject smoking and receiving strong alcoholic beverages.

Also, if possible, you should try to minimize the number of stress-forming factors. Sometimes the attack of gastritis can provoke excessive physical exertion. So — Do not strain. Neither morally nor physically.

Nervous, eat dry, miss the lunches and breakfast — We earn gastritis. At first glance, everything is simple and understandable. But it was not there. It turns out that this slender scheme missed a very important link.

A link is — One harmful microbe, which, according to statistics, lives in the stomach nearly 80 percent of the representatives of our country's population. Name is his Helicobacter pylori. Detected him in 1983 Australian scientists Barry Marshall (Barry J. Marshall) and Robin Warren (J. Robin Warren). For this discovery both scientists were awarded the Nobel Prize. Under the influence of harmful factors, the protective forces of the body are depleted, which leads to enhanced reproduction of Helicobacter pylori. Like any pathogenic microbe, it causes inflammation of the mucous membrane of the stomach. Some time, secretory cells work normally or even somewhat reinforced, highlighting digestive juice, but then they gradually reborn, which leads to a decrease in their excretory function. So develops gastritis — Inflammation of the stomach. That is why most modern methods of treatment of gastritis necessarily include antibacterial therapy.

You — Blonde (ka) with blue eyes and first blood group? Congratulations. You — In the risk group for the development of peptic disease. Among people in accordance with this description, this disease is several times more often.

Currently, the main role in the occurrence of ulcerative disease, as in the case of gastritis, scientists are given to Helicobacteria. Nevertheless, not everyone who has in the stomach «Lives» This microbe appears ulcer. This suggests that the emergence of ulcerative disease occurs under the influence of a number of reasons. Here both neuropsychiatric factors and merors in nutrition, and genetic predisposition (it has been established that the prevalence of peptic ulcer disease in the relatives of the patient is 5-10 times higher than the relatives of healthy people).

A significant role in the occurrence of ulcerative disease is also played by harmful habits that have both direct and indirect influence on the gastric mucous membrane. The appearance of ulcers can provoke and uncontrolled reception of some drugs (reserpine, corticosteroid hormones, preparations of aspirin group).

The most constant and important symptom of peptic ulcer is pain. It can be caused by irritation of ulcers with gastric juice, as well as the influence of food both on an ulcer and the nervous apparatus of the stomach. Pains for ulcerative diseases have clear rhythm (time and connection and communication with meals), frequency (alternation of pain with periods of their absence) and seasonality of exacerbations. It is characteristic that pains for peptic diseases decrease or disappear after meals.