Neutrophils - such small blood cells, andsuch useful. After all, they stand up to protect our body in contact with it a variety of infections. But when these cells become relevant enough - developing neutropenia, and "defense" of our body fails. 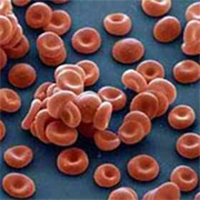 Neutropenia - decrease in the number of neutrophils inblood. Neutrophils - a major cellular defense system against bacteria and fungi. They play an important role in wound healing, and combat the organism of alien objects.

Neutrophils mature in the bone marrowfor about 2 weeks. After entering the bloodstream, they for about 6 hours circulate in search of infectious agents and foreign substances. Finding a "victim", neutrophils migrate into tissue, are attached to these foreign agents and produce toxic substances that kill and digest them. The process is accompanied by an inflammatory response in the infected area, which is manifested by redness of the skin nadochagom inflammation, swelling and local temperature rise.

Neutropenia can have many causes. The number of neutrophils is reduced by insufficient development of their bone marrow or increased destruction of white blood cells in the circulatory system.

Neutropenia, along with other types of deficiencyblood cells characteristic of aplastic anemia. Reducing the number of white blood cells accompanied by some rare hereditary diseases such as infantile genetic agranulocytosis and neutropenia family.

Neutropenia occurs in some patients withmalignant tumors, tuberculosis, myelofibrosis, a deficiency of vitamin B12 and folic acid. Some medications, especially those used in the treatment of malignant tumors (chemotherapy), the ability to break the bone marrow to produce neutrophils. Neutrophils are destroyed more rapidly than are produced when certain bacterial infections, allergic diseases, autoimmune diseases and several receiving medication. When the spleen increase (for example, Felty syndrome, malaria and sarcoidosis), neutrophil count may be reduced due to the fact that the enlarged spleen captures and destroys them.


How to identify the suspect and neutropenia

Neutropenia can develop suddenly duringa few hours or days (acute neutropenia), or gradually over months or years (chronic neutropenia). Because neutropenia is not shown in any specific symptoms, it frequently goes unrecognized until it develops an infectious disease. In acute neutropenia may increase body temperature, sometimes there are painful sores around the mouth and anus. Often joined by bacterial pneumonia and other serious infections. In chronic neutropenia, neutrophils reduced if not dramatically, the disease may be less severe. When a person develops frequent or unusual infections, the doctor has the right to suspect neutropenia and to make a diagnosis, appoints CBC. Reduced neutrophil count indicates neutropenia.

Then establish the cause of neutropenia. Your doctor may order a bone marrow biopsy. This procedure is unpleasant, but it is not dangerous. bone marrow sample is examined under a microscope to assess its structure, the amount of production of leukocytes and neutrophil progenitor cells. After determining the number of progenitor cells, your doctor may suggest a time required to neutrophils returned to normal. If the number of progenitor cells is reduced, the new neutrophils will not appear in the bloodstream for two or more weeks; if their number is quite normal and mature cells, new neutrophils can appear in the bloodstream for several days. Sometimes the bone marrow examination indicates another disease, such as leukemia or other malignancy in blood cells.


The effectiveness of treatment of neutropenia depends on its cause

neutropenia Treatment depends on the cause andgravity. When possible, stop taking medications that can cause neutropenia. Sometimes the bone marrow recovers without treatment. In mild neutropenia (0.5 x 109 in 1 liter of blood, or more than 12.5 - 13% of all leukocytes) usually no symptoms and no treatment is required.

If severe neutropenia (less than 0.5 x 109in 1 liter of blood) in patients with rapidly developing various infections because the body can not afford to fight pathogens. In such cases, patients are hospitalized and immediately prescribe strong antibiotics, even before the established cause and exact location of the focus of infection. Increased body temperature - a symptom that points to an infectious-inflammatory process, - in the presence of neutropenia is a signal to the provision of immediate medical assistance.

Sometimes there are effective growth factorsIt stimulates the production of white blood cells, particularly granulocyte colony stimulating factor (G-NWR), colony stimulating factor and granulocyte-macrophage (OM NWR). Such treatment can prevent the reduction of neutrophils at periodic hereditary neutropenia. If neutropenia is caused by an allergic or autoimmune reaction, it helps corticosteroids (hormones). Anti-thymocyte globulin, or some other drugs can be used in cases of suspected autoimmune disease to suppress immune system activity, such as aplastic anemia. If the enlarged spleen, its removal can increase the number of neutrophils.

If not provide immunosuppressive effect in patients withaplastic anemia is needed transplant (transplant) bone marrow. This operation can have significant side-effects, requires prolonged hospitalization and is performed under strict medical indications. For the treatment of neutropenia, an isolated bone marrow transplant is rarely done.