Rhesus conflict between mother and fetus

In most cases, the first pregnancy in Rh-negative women are uncomplicated. Rh factor contained in blood cells, mainly erythrocytes.

Every woman from a young age should know theirblood group and Rh factor. According to statistics, approximately 15-20% of the female population has Rh-negative blood factor. Rh (rhesus or antigen) - a protein which may be present on the surface of red blood cells (blood cells, carrying oxygen to the tissues). About 85% of people have the Rh factor and, accordingly, are Rh-positive. The remaining 15% who do not, - Rh-negative.

The threat of Rhesus-conflict during pregnancy is caused by a combination of two factors: (1) female rhesus negative and the father of a child - Rhesus positive; (2)
fetus inherits from his father's gene for a rhesus positive, ie,
unborn child Rh-positive. In this case, the expectant
the mother can begin education protivorezusnyh antibodies. AT
if both parents are Rh-negative, not threat of conflict
there (the child is bound to be Rh-negative). Also
the threat of a conflict does not exist, if the woman is Rh-positive
(Rh affiliation father and child do not matter). Besides, in
the case of an Rh-negative mother and Rh-positive father has
a small chance that the fetus will inherit from both parents
genes for Rh negative and Rh-conflict does not arise.

Rh antibodies - is
compounds of the protein structure, which are produced in breast
body in response to entering the Rh positive red blood cells therein
fetus (the immune system of the future mother perceives these as the red blood cells
Alien). Upon detection of circulating mother Rh antibodies obstetrics
diagnoses: Rh sensitization. This happens when
artificial or spontaneous abortion uterine or ectopic
pregnancy. Rh antibodies can also occur after the first birth,
if the baby is born Rh positive (during birth the baby's blood
mother enters the bloodstream, causing a corresponding reaction).
Sensitization of Rh-negative women are also available at
transfusions of Rh-incompatible blood (even if such transfusion
conducted in early childhood).

The process of immunization
pregnant woman starts with the formation of the Rh antigens
the red blood cells of the fetus. Since Rh antigens contained in the blood system
fetal 7-8 weeks of pregnancy, the earliest possible in some cases
sensitization of the mother's body. However, in most
The first cases of pregnancy in Rh-negative women (with
absence last sensitization) occurs without
complications.
The risk of rhesus sensitization increases with
subsequent pregnancies, especially in the case of the first interrupt
pregnancy, bleeding during the first pregnancy, with manual
placenta, and if labor performed by caesarean section
or are accompanied by significant blood loss. This is explained by
when these complications is high probability of getting large
the number of Rh-positive red blood cells in the maternal blood stream and how
result - the formation of a large amount of Rh antibodies. Besides,
at the first pregnancy the expectant mother's immune system encounters
Rh-positive red blood cells of the fetus for the first time. Therefore, antibodies
It is produced not so much: about as much as you need to
destruction of the blood entering the fetus erythrocytes mother. Besides,
these antibodies are immunoglobulin class M, having great
size and does not penetrate through the placenta to the fetus. 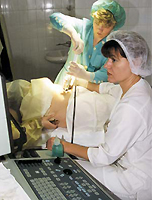 But after giving birth to
a woman's body are the "memory cells" that in future
pregnancies will be able to "organize" a rapid and potent antibody production
against the Rh factor. It will have a different type of antibody -
immunoglobulin class G, which are smaller than
immunoglobulins M, and hence easier to penetrate the placenta and
They are more aggressive. Therefore, the reaction of the female immune system
Rh antigen on the fetus during the second and third pregnancy much
operational and stiffer than the first. Accordingly, the above risk
Fetus.
According to
Medical literature pregnancy after the first immunization there
10% of women. If a woman with Rh-negative blood escaped
Rh-immunization after the first pregnancy, the next
pregnancy, Rh-positive fetus probability of re-immunization
It is 10%.

Healthy future
mother Rh sensitization is not harmful, but it can be
danger to the child. Once in the bloodstream of the fetus, Rh antibodies
destroy its red blood cells, causing anemia (decreased hemoglobin)
intoxication, disruption of vital organs and systems. this
a condition called hemolytic disease (hemolysis - the destruction of red blood cells).

The disintegration of red blood cells leads to kidney damage and fetal brain.
Since red blood cells continuously destroyed his liver and spleen
try to accelerate the production of new red blood cells, thus increasing in
sizes. In the end, they can not cope. There comes a strong
anoxia, and started a new round of heavy violations
body of the child. In the most severe cases, it ends it
fetal death at various stages of pregnancy, in the lighter
Rhesus conflict occurs after birth jaundice or anemia
newborn. Most often hemolytic disease developed rapidly in
baby right after birth, which contributes to a large flow
the amount of antibodies in the blood of a baby in violation of the integrity of the blood vessels
placenta.

Treatment of hemolytic disease
complicated, complex, and sometimes the baby required exchange transfusion
blood. The doctors injected him Rh-negative blood group and carry out his
resuscitation. This operation must be carried out in
within 36 hours after the child's birth.

If it turns out that the woman Rh-negative

Most
important in addressing Rhesus conflict - its prevention.
Determine the blood group and Rh factor preferably before pregnancy.
If you are unable to do this before the pregnancy, the female
consultation at the first summons spend determination Rhesus affiliation.
If it turns out that the woman Rh-negative, her take on
special account. All pregnant women with Rh-negative blood should
regularly examined for the presence of Rh antibodies in the blood serum. at
detection of antibodies necessary to apply to the specialized
medical centers for further observation.

AT
arsenal's leading obstetric clinic has modern equipment,
allowing to monitor the fetus and diagnose the extent
the severity of hemolytic disease and conduct basic, if necessary
Therapeutic measures - intrauterine blood transfusion (under control
US through the abdominal wall of the mother get into the vein of the umbilical cord and
fruit poured 20-50 ml of packed red cells). This operation improves
the condition of the fetus and can prolong pregnancy.

regular
monitoring of pregnant women with Rh sensitization in specialized
centers allows you to select the optimal timing and method of delivery.

important
role in the prevention of Rh sensitization given to family planning.
The guarantee of a healthy baby from rhesus negative women (with
the absence of prior sensitization by blood transfusions)
It is to keep the first pregnancy.

FROM
for prevention of Rh sensitization used drug
domestic production - anti-Rhesus gamma globulin. This drug
It destroys remaining after delivery of circulating Rh-positive mother
fetal red blood cells, thereby not giving proper start
maternal immune response (development of maternal protivorezusnyh
antibodies). Introducing this drug must be after giving birth, if born
Rh-positive baby; after artificial or spontaneous
abortion; after the operation made in connection with
ectopic pregnancy. It should be remembered that the efficiency of the
the drug is largely due to the introduction of the terms: with an acceptable
up to 72 hours is considered optimum for a period of not more than 2 hours after
childbirth or surgical intervention listed above.