Treatment of hemolytic disease of the newborn

Hemolytic disease develops in utero. Rh factor, contained in red blood cells of the fetus and inherited from his father, enters the mother's blood. For protein, the mother's body responds to the formation of anti-Rhesus antibodies stranger to him. Some of these antibodies again passes through the placenta into the fetal bloodstream and destroys red blood cells


Treatment of hemolytic disease of the newborndirected primarily to combat the high level of bilirubin, removal of maternal antibodies and the elimination of anemia. Moderate and severe cases subject to operative treatment. For operational methods include exchange transfusion and hemosorbtion. 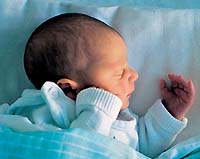 Exchange transfusion blood remainsindispensable intervention at the most serious forms of hemolytic disease of the newborn, as it prevents the development of kernicterus in which bilirubin damaged fetal brain nuclei, and restores the number of blood cells.

Operation exchange transfusion isblood sampling and transfusion of the newborn in his umbilical vein donor Rh-negative blood in the same group as the blood of a newborn). In one operation can be replaced up to 70% of blood baby.

Hemosorption represents an extraction methodantibodies from blood, bilirubin, and certain other toxic substances. This baby blood taken and passed through a special device, in which the blood passes through a special filter, purified blood flows to the kid again. Advantages of the following methods: no risk of transmission of infections from donated blood, the baby is not introduced foreign protein.

After surgery, or in the case ofeasy flow of hemolytic disease of the newborn transfusions of albumin solutions, glucose, gemodeza. In severe forms of the disease gives good effect intravenous prednisolone for 4-7 days. In addition, apply the same methods as in the transient konyugtsionnoy jaundice.

The method of hyperbaric oxygenation

A very widely used method foundHyperbaric Oxygen Therapy (HBOT). In the pressure chamber, where placed the infant is fed a pure humidified oxygen. This method allows you to significantly reduce the level of bilirubin in the blood after it improves the general condition, reduced the impact of bilirubin toxicity to the brain. Usually held 2-6 sessions, and in some severe cases require 11 -12 procedures.

At the present time can not be considered until the enddeciding on the possibility and advisability of breastfeeding babies in the development of hemolytic disease of the newborn. Some experts believe that it is quite safe, while others lean in favor of the abolition of breastfeeding in the first week of life of the baby, when the gastrointestinal tract most permeable to immunoglobulin is the danger of getting additional maternal antibodies in the bloodstream baby.