Agranulocytosis is called deep leucopenia,because this disease is characterized by a very sharp drop in the number of white blood cells, and sometimes their complete disappearance. Learn more about agranulocytosis and its forms - read the article.

Agranulocytosis is characterized by a sharp decreaseor lack of peripheral blood leukocytes granular. Single cases of the disease have been described in 1907 Türk, and in 1922 Shulga gave him a detailed clinical and hematologic response, and the name of neutropenic angina. Shulga thought characteristic of the presence of the disease necrotic angina or necrotic lesions on the mucous membranes, fever and a sharp decrease in the number of white blood cells (2-1) D / L with relative lymphocytosis - up to 80-90%, and a sharp decrease in almost reduce granulocytes.

The reasons that cause the development ofdisease include infections, sepsis, tuberculosis, typhoid fever, proliferation of leukemia, metastatic cancer and other malignant tumors in the bone marrow, as well as the use of drugs, the effect of radiation energy, cytotoxic (anti-cancer) treatment.

According to the mechanism of release 2 forms agranulocytosis - myelotoxic and immune.

The disease begins as a result of the appearance of antibodies in the blood against granulocytes.

The reaction of antigen - antibody takes place in the presence ofhapten (biopolymer molecules fragment or artificially synthesized chemical compound), whose role is often performed medications. Agranulotsitarnoy antibodies exert their effect in the peripheral blood at first, resulting in the death of mature neutrophilic granulocytes, and then a young granulocyte located flush with the granulocyte progenitor cells in the bone marrow of a number.

It should be remembered that the chemical and pharmaceutical substances, depending on the mechanism of action may cause, in some cases myelotoxic, and secondly - the immune agranulocytosis.

Medicinal agranulocytosis observed sharpbeginning with raising the temperature to 38-39o, occurrence of angina, stomatitis, with the development in some cases, candidiasis of the oral mucosa, larynx and esophagus.

Changes in peripheral blood depend on the severity of the disease.

Characterized by increasing leukopenia (up to 1-3 g / l) forby reducing the number of neutrophils in the peripheral blood almost to their complete disappearance. The smear (for analysis) and very few cells are presented primarily lymphocytes. Sometimes in the peripheral blood was observed monocytosis, single reticular (Process) cells and plazmotsidy. Anemia and thrombocytopenia are generally not observed, except in very severe cases.

On exit from a agranulocytosis often develops leukemoid reaction with the amount of leukocytes 30 g / l or above in the peripheral blood, with the appearance of blast cells, promyelocytes and others.

This pattern is usually short-lived, it can bewatch just a couple of hours. Then, as the recovery of the patient's blood counts are normalized. Duration of immune agranulocytosis in most cases is a half - two weeks, sometimes more. 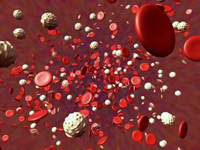 Myelotoxic agranulocytosis oftenIt arises as a manifestation of cytostatic disease and is characterized by the cessation of production of neutrophilic granulocytes in relation to a product at the level of progenitor cells or stem cells myelopoiesis. This changes not only the number of granulocytes and lymphocytes, platelets and erythrocytes.

The reason for the development of agranulocytosis myelotoxic drug substances may be metastatic neoplastic lesions of the bone marrow, and other leukemias.

In patients even before signs of the diseaseIt decreases the number of white blood cells, platelets, and reticulocytes. May develop leukopenia - to 0,5-0,1G / l. The number of neutrophils in the peripheral blood is sharply reduced almost to their complete disappearance.

Against the background of pronounced changes in the peripheralBlood and bone marrow appears angina, stomatitis, sometimes bleeding gums, nosebleeds, bleeding under the skin. In other cases, only the affected mucous membranes of the mouth and throat.

The reason for the defeat of the mucous membranes atmyelotoxic agranulocytosis is weakening the body's defenses, and therefore the action of activated pathogens. Additionally, cytotoxic (anti-cancer) drugs affect all proliferating cells, including mucous membranes of digestive canals. These changes can last from one to two weeks to a month or longer.

Before leaving the state of agranulocytosis in the bone marrow appears a large number of blasts and myelocytes. In peripheral blood are metamyelocytes, myelocytes, monocytes and plazmotsidy.

Forecast agranulocytosis under aseptic (sterile) conditions, the use of antibiotic therapy and, in cases of immune agranulocytosis - and steroid therapy in most cases - is favorable.