What is Thrombocytopenia? What are the symptoms of this disease? How is the treatment of thrombocytopenia? The answers to these and other questions can be found in the article.

Thrombocytopenia (low levels of platelets in theblood) - one of the most common HIV-associated conditions. This is one of the few problems that can be directly related to the virus itself rather than its effect on the immune system. This article describes in detail what is thrombocytopenia, and what methods of treatment.

Thrombocytopenia - a lack of means, the lowplatelet levels in the blood. Another name for platelets - platelets. This very small blood cells are irregularly shaped, in which there is not even the nucleus. Platelets are produced by megakaryocytes - huge cells that are found in the bone marrow. 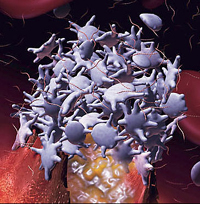 Platelets are necessary for the body to collapseblood. If the surface of any blood vessel is broken, and blood begins to flow out of it, sticky blood irregularly shaped plates literally clog the damage to the vessel wall. Thus, platelets prevent bleeding and blood loss. If the body was not of platelets, a person could die from any bleeding, including internal, imperceptible to himself.

Thrombocytopenia can occur inHIV-positive people for various reasons. The first reason is that HIV infects megakaryocytes, which means that the HIV itself may lead to shortage of platelets. Secondly, certain anti-HIV drugs can damage the red marrow (for example, some nucleoside reverse transcriptase inhibitors). The same applies to some disease at the AIDS stage (eg, lymphoma, or MAC).

Another reason may be that the immunethe system can produce antibodies that are directed against the body's healthy platelets. This condition is called thrombocytopenic purpura (purpura or hemorrhagic). These antibodies are called autoantibodies, and the state - an autoimmune, meaning that the body produces antibodies "against himself". Autoantibodies serves spleen signal that destroys and removes platelets from the body.

Platelets are also carriers of serotonin andL-tryptophan - two substances which are involved in the regulation of sleep / wake cycle, emotional states and appetite. Therefore, theoretically, thrombocytopenia can lead to sleep disturbances and mood disorders (depression).

The manifestations of thrombocytopenia

The only sure way to diagnosethrombocytopenia - determine the level of blood platelets. All HIV-positive people are advised to regularly donate blood count, which includes determining the level of platelets. General blood test is usually done every 3-6 months, together with the analysis on the immune status (immunogram) and analysis of viral load (amount of virus in the blood). Thus, if an HIV-positive person goes to the doctor regularly and losing blood tests, the doctor is required to detect thrombocytopenia long before it could cause serious problems. 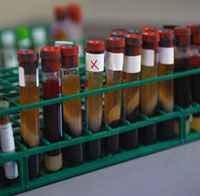 Prednisone. Prednisone - is a drug from classsteroid hormone similar to cortisone. This drug has many indications for use, including its use for the treatment of immune thrombocytopenic purpura, since it "soothing" hyperactive immune system, which can lead to an increase in platelets. Long-term use of prednisone for people with HIV is problematic, as it can suppress the immune system.

Gamma-globulin. Injectable gamma globulin can be administeredalone or with prednisone to increase the platelet count. This drug is administered intravenously with a dropper about 4-6 hours and is generally prescribed for receiving every 1-3 days.

Anti-D globulin. This drug is only used for some people with immune thrombocytopenic purpura. It prevents the destruction of the spleen platelets. It also is administered as an intravenous injection.

Splenectomy. This operation is also called a splenectomy. The spleen destroys platelets when they are attacking autoantibodies, and its removal should theoretically lead to a cure of immune thrombocytopenic purpura. However, this method of treatment is practiced very rarely, and usually it never appoint, if they were not tried all other means, less serious.

Thrombocytopenia - a condition that candevelop in any person, even when a sufficiently high immune status, regardless of external factors. Nevertheless, although in itself thrombocytopenia occurs frequently in people with HIV, its serious and dangerous forms - a rarity. If antiretroviral therapy is available, most likely, the majority of HIV-positive will receive it before they can develop this condition.

For HIV-positive people is important to regularlyfor tests, including complete blood count, even if they feel well and do not take any treatment. This allows time to detect such deviations as the thrombocytopenia, and take action before it can cause problems with bleeding.