Always cheerful toddler suddenly starts with eithera sudden shrill cry ... He wants to eat, but an attempt to swallow your favorite cereal is crying again? He can not sleep, trying to get comfortable on the pillow, but it is impossible? Perhaps the child has ear pain.


Seeing the suffering of the crumbs that are not even able toexplain where and what was wrong with him - a serious test for the parents. Worst of all be aware of his own helplessness. To such a situation is not caught by surprise, it is better to know in advance about the disease as detailed as possible. Especially that timely detection of the disease will help in its effective treatment, and will provide an opportunity to minimize the chance of complications.

The vast majority of diseases of the ear relatedto a group of inflammatory and is a generic term - otitis media (otitis; from the Greek OTos - ear and -itis suffix, used to form the names of inflammatory processes, which can be acute and chronic.).

The structure of the organ of hearing

The organ of hearing consists of two parts: peripheral and central. The peripheral portion comprises the sound-conducting (the outer and middle ear) and zvukovosprinimayuschego (inner ear) devices; represented by central nerve fibers that form pathways that end in the cerebral cortex in the temporal lobes.

The outer ear consists of the pinna andthe external auditory canal. In infants and young children the auditory canal is short and slotted tapered towards the eardrum. The boundary of the outer and middle ear is the eardrum. A child up to two months, it is much thicker and takes up almost horizontal position.

The middle ear lies deep in the temporal bone and consists of three interconnected parts:

The tympanum contains a chain of hearingbones (hammer, anvil, stirrup), received the name because of a similar type, and allowing for the transmission of vibrations from the eardrum to the inner ear; and - ligaments, muscles, nerves and blood vessels.

The most important element of the middle ear structureIt is the auditory tube, the tympanic cavity connecting the external environment. Its mouth open into the nasopharynx on the sidewalls, at the level of the hard palate. The rest of the auditory tube pharyngeal mouth closed and opened only when making sucking and swallowing movements.

In newborns and infants auditory tube is short and wide, which increases the risk of getting an infection from the nasopharynx to the middle ear.

The inner ear, or labyrinth, lies in the depthtemporal bone. The maze consists of the cochlea and the semicircular canals, which contain the sound-system and nervous-receptor cells of the vestibular analyzer. The vestibular analyzer controls the equilibrium position of the body in space and muscle tone. Due to the anatomical similarities of these two systems of the inner ear can cause damage, in addition to hearing loss, vestibular disorder. The main feature of these disorders is vertigo, nausea, vomiting.

Inflammatory diseases of the outer ear

Of these children is more common otitis externa. It occurs when the skin of the outer ear canal infection enters (when cleaning the ears or hair combing). At the same time the skin around the ear canal is red, and he slotted passage narrows due to edema. Often there appears a translucent discharge.

Also meets the external ear diseasecaused by group A streptococcus - erysipelas. Infection occurs through microcracks, damaged skin. The disease begins with the fact that the body temperature rises to 39,0.S and above, there is a fever, the child refuses to eat. Auricle with red, swells, on the skin of the external auditory canal often appear bubbles.

Moreover, the cause of pain in the ear can becomeboil or an inflammation of the hair follicle in the outer ear canal. The prerequisites for its occurrence may be reduced microtrauma of the skin and the body's resistance. Outside, a boil can not be seen, but its presence can be assumed from indirect evidence, such as pain in the ear, which increases when touched, and chewing and parotid lymph nodes. After a few days the ripe abscess is opened, and the pain subsides. With time begun treatment complications can be avoided.

An assessment of the child's general condition anddefinition of tactics to combat disease. In less severe disease can restrict local treatment at home - lotions, ointments, balms. In severe cases, hospitalization in a hospital, and adding to the local treatment of general therapy - anti-bacterial, anti-inflammatory, etc. In all cases, the drug should be prescribed by a doctor, self-medication is not allowed.

Inflammation of the middle ear

There are acute and chronic otitis media. Acute otitis media is the undisputed "leader" on the frequency of occurrence among the auditory organ pathologies. This disease occurs more often in the background of SARS (as its complication) in children with weakened immunity, prematurity, and - in babies who are bottle-fed and therefore deprived of maternal antibodies (protective proteins of the blood), transmitted through breast milk. In most cases, the infection gets into the middle ear from the inflamed nasopharynx by the auditory tube. In young children (under 3 years) auditory tube is wide and short, which greatly facilitates the path of the microbe. Besides babies first year of life are predominantly in a horizontal position, which hinders the outflow out of mucus and promotes its stagnation in the nasopharynx. In infants cause of otitis media may be ingress of formula or breast milk from the nasopharynx to the middle ear. 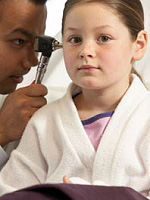 symptoms. The main manifestation of acute middlecatarrhal otitis media is pain in the ear. early age child can not say enough about it, or specify the place that hurts. He screams, rubbing his head on the pillow, he grinds his teeth sometimes can not sleep. When a unilateral lesion of the baby tends to take a forced position, lying on a sick ear, sometimes reaching him his hand, refusing food as sucking and swallowing increase the pain.

Set aside the defeat is possible, ifgently press on the tragus - projection, located in front of the ear canal. On the side of the lesion will occur pain reaction a child cry and try to turn away from the stimulus. To better appreciate this sample, it can be done when the child is sleeping (though many mothers would be a pity to disturb litter). In addition, the child's body temperature rises, it gets tired quickly, concern the periods are replaced by apathy, lethargy, can be attached vomiting, diarrhea.

In children, acute catarrhal otitis average canvery quickly (in the first day since the beginning of the disease) go to purulent. It is characterized by suppuration of the ear, which indicates rupture of the tympanic membrane (the ear pain subsides) and is an indication for the provision of emergency medical care (child must be put in the outer ear canal dry cotton turunda (wick), be sure to wear a hat and go to the doctor ).

complications. The danger of this is a serious diseasecomplications that can occur with late begun treatment or fulminant disease. The most common of these is mastoiditis - acute inflammation of the mastoid process of the temporal bone. Appears pain behind the ear, her skin may redden and swell, swell, and the pinna bulged forward and downward, the child bows her head to the side of defeat.

Other conditions that can be treatedas a complication, is a stimulation of the brain membranes syndrome (meningeal syndrome) resulting from the underdevelopment of the middle ear structures, when the inflammation spread beyond it nothing restrains, and - due to the abundant vascular network and communication with the cavity of the skull. Thus there are cramps, vomiting, confusion and decreased physical activity. The child to facilitate his fortune reflexively throws his head back.

Treatment. At the first suspicion of ear disease (whenanxiety, altered condition of the child), you need to call at the house pediatrician or ENT doctor, consult a specialist in the clinic, medical center. With timely and proper treatment initiated manage to deliver the crumbs from suffering without any unpleasant consequences. For example, in acute otitis media in most cases it is enough to conservative (non-surgical) treatment. Therapy necessarily involves antibiotics in tablet form or in the form of injections (purulent otitis average) of at least 5-7 days, particularly children under two years. This is done to prevent the development of complications. In addition, to be regularly used drugs to narrowing of blood vessels (vasoconstrictor nose drops), which supports the auditory tube patency.

In addition to the basic treatment can beassigned to the thermal physiotherapy: UVR (ultraviolet radiation), UHF-therapy (the method of electrotherapy, based on the impact on the patient's ultrahigh-frequency electromagnetic field), laser light mud.

It should be understood that the choice of adrug depends on the phase of the inflammatory process, antibiotics must be administered with the obligatory account of the sensitivity of microbes to them. In the case of treatment failure requires replacement of the drug. Self-prescription of treatment by parents, based on the experience of previous visits to the doctor may result in undesirable consequences or a mask process, making it difficult to diagnose.

symptoms. Appears single- or double-sided permanent hearing loss, tinnitus, sensation of fullness. When yawning, blowing the nose can improve hearing for some time.

Treatment. Therapy with tubo-otitis should be comprehensive andprimarily aimed at addressing the dysfunction of the auditory tube. It is necessary to heal the source of infection in the nasopharynx, using topical antibiotics, antiseptics (disinfecting) agents, physiotherapy. Good effect gives the introduction of drugs into the ear through the Eustachian tube. This procedure provides an ENT doctor.

If the source of infection in the nose and throat are enlarged adenoids, the tubo-otitis may lead to permanent hearing loss. Their timely removal helps to avoid this adverse outcome. 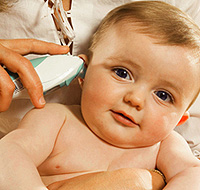 As you know, prevention is much easier,than to treat it. Reduce the risk of otitis the disease in the child respect for help a few simple rules. When it comes to the youngest, it is desirable as long as possible to provide them with breast milk intake, because it is the main source of the body's defenses a little.

When feeding is best to keep the baby closer to the vertical position, in order to avoid casting the liquid into the ear through the Eustachian tube.

If the baby is still cold, when the adultthe treatment is necessary to remember that in the supine position in the nasopharynx is formed stagnation, increasing the risk of infection of the middle ear. It is therefore necessary to remove the pathological contents of nasal suction bulb, and periodically rotate the crumbs from one side to the other.

uncontrolled use of antibiotics should be avoided.

If the adenoids are the cause of otitis media, they are subject to removal.

All children with diseases of the ears should be observeda doctor from the beginning and throughout the illness. In no case can not be alone, without examination and doctor's appointments, instilled into the ears of drugs. If you suspect a child developing complications is subject to immediate hospitalization and intensive treatment, which does not exclude an urgent surgical care.

It should not be carried away by self-treatment, to appointtreatment on the recommendation of the pharmacy staff or friends, giving your child drugs, details of which are drawn from advertising or excessive trust in the omnipotence of traditional medicine. Appointment of drug therapy should perform ENT doctor after examination and investigation.