Home>disease>Symptoms and treatment of scabies

Symptoms and treatment of scabies

disease
by admin
Scabies is a skin disease thatcause microscopic parasites. The parasite that causes an unpleasant itching and rashes all over the body, called scabies or itch mites. The disease is transmitted through skin to skin contact as well as through clothing, appliances, bedding and so on. 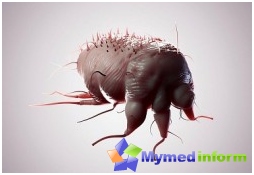 Accurate information on the epidemiological picturemange to date does not exist. The disease was most intense during the war, when the itch to hit thirty percent of the population. There are theories that read on the wave-like nature of the disease, but such opinions are strongly criticized, because they do not have accurate evidence.

Seasonality is one of the indicators for thisdisease. That is scabies is the most common in the autumn and winter season. This is due to the active fertility of ticks from September to December because cooler temperatures promotes the survival of a larger number of newly hatched manage on.

If a person is infected with scabies, he noticedit's not just because the incubation period of the disease varies from 4-6 weeks. During this time, the infected person may feel itching on the body in certain places, but it is at night, when the tick is most active due to cool, wet environment. As a result of these "walks" the parasite to man is difficult to sleep, sleep becomes sensitive and as a result this can lead to nervous disorders. Many people think that scabies occurs due to low level of human health, but it is not so. Water and soap for scabies is not a threat, so the number of parasites is not reduced when taken daily shower or bath.

Scabies can have like an epidemic(disease of many people) and endemic (disease of one person) character. Very often scabies can be picked up in organized groups, such as barracks, boarding schools, prisons, dormitories and so on. In institutions where people are together for only a few hours a day (for example, schools, kindergartens, work collectives) scabies poses no threat.

As a rule, scabies in most countriesyoung children. This is due to the lack of immunity to the causative agent of this disease. If children come into contact with patients with scabies, then the risk of contracting ticks is 99 percent out of 100. But in Russia, teenagers are more likely to get scabies and take on 25 percent of the country's incidence. In second place are children of school age, in third - in preschool, and in fourth place are mature people. Very often scabies is found in such an age group as students and less often in schoolchildren and children attending kindergartens. This is due to the fact that in children of different age categories antipruritic immunity develops differently, and they also have very different sexual activities. In addition, students spend most of their time together than schoolchildren or preschoolers.

In children, symptoms of scabies are always the same: First there is an itch, is greatly enhanced in the evening, followed by a rash that combing can form abscesses. This rash appears as a result of vital activity of scabies mite, which throughout the night digging tunnels, at the end of which lay eggs. If you do not know what it looks like scabies and doubt in the symptoms of the disease, you can view photos on the internet and compare them with your rash. But better, of course, to see a specialist for the timely identification and treatment of disease.

If scabies appears in children at firsthalf a year of life, then it looks like a urticaria, because it is accompanied by a red rash. The rash is localized and mainly appears on the face, back and buttocks. Not everyone knows how scabies look exactly, so you should not immediately take it for various dermatoses and self-medicate. There are cases when scabies in children are similar to acute eczema, while itching occurs not only in tick-affected areas, but also in remote areas of the skin. 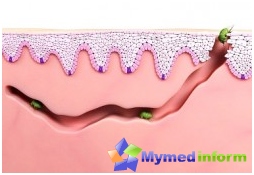 Very often, but not one hundred per cent,scabies in adults accompanied by pruritus. But if the itching is present, it is more and more felt in the evening. This is due to the fact that the female mite starts digging "moves", a length of one centimeter. The rate at which "works" mite is 0.5-5 millimeters per day. The tick is not able to bear the impact of the environment, and to penetrate into the skin of his victim he needed time interval of about an hour. During this time, the parasite is affected by many factors, mainly the temperature, whereby the female mite dies. Therefore, if time does not detect this parasitic disease, one can only imagine how many eggs the mite can be postponed for a few nights, in this connection, the symptoms will be very unpleasant, and the treatment will be delayed for a longer period.

If a person has scabies, then her firstsigns are a rash accompanied by mild redness. Already after a few days on the patient’s body it will be possible to discern scabies, but not always. It happens that scabies proceeds without the formation of moves. At the initial stage of the disease, the symptoms will be as follows: small pimples appear on the body, which after a short period of time can turn into vesicles - a vesicular rash. If this kind of rash is clearly expressed, this does not mean at all that there is a large number of parasites under the skin of the patient. This is simply due to the fact that a person has an aggravated allergic reaction to the waste products of scabies itching.

During pregnancy, scabies negatively affectswell-being of a woman. Because in this condition, she needs a good healthy sleep, rest and calm, and itchy skin does not allow the young mother to rest, as a result of which she does not regain her strength as needed. At this time, the fetus is not in danger, but during childbirth, the baby can get itchy from the mother. And usually in such cases, scabies in a baby are taken for urticaria and, accordingly, the treatment of the disease goes in a different direction. In addition, with the untimely treatment of scabies in small children, it can lead to the development of a purulent infection, the treatment of which requires a long time and the use of medications, which can adversely affect the baby's health. That is why during pregnancy prophylaxis of scabies is simply necessary.

Precautions of scabies infection is:

But if, after all, the pregnant woman got scabies,then at the first signs of this disease it is necessary to use a special tool that will not harm either the pregnant woman or the fetus. It is also possible to use the ointment, which doctors prescribe most often. Such an ointment is called sulfuric because of the large amount of sulfur in the composition, which kills scabies itching and disinfects human skin. There are no contraindications to taking this drug, so it can be used by pregnant women. And if scabies passed from the mother to the newborn, then treatment should be started without delay.

In order to make a correct diagnosis,it’s not enough just to look at photos of scabies in medical supplies or other sources. You need to see a doctor and take tests for a laboratory test. It is necessary to make thin sections of the epidermis, which will make it possible to identify not only itching, but also eggs laid by the tick. An alkaline solution is also applied to the skin, so that areas of affected skin are visible. Another method for detecting scabies is staining the skin with tincture of iodine. In this case, the moves will be visible on the body, because they will look like dark brown stripes. Healthy code will have a light brown color. If during the course of laboratory tests the ticks are visible, then this is confirmation that this is scabies, the treatment of which must be carried out immediately.

There are cases that resemble the symptoms of scabiesother illnesses, and as a result a person engaged in self-treatment, extends the livelihoods of mites and promotes the formation of new adults.

In the initial stages of the disease in scabiesthe patient has a rash on the hands, namely mezhdupaltsevoy zone on the hands and on the inner side of the wrist. An infected person can see the manifestation of scabies very soon. Because the disease affects the skin quickly elbows, feet, armpits, navel, waist, buttocks. Symptoms of scabies occur in women under the breasts, and men on the penis and scrotum. This disease can spread throughout the body except the scalp and face. You must know that in most cases scabies is transmitted through direct skin-lasting leather. Also, the disease can be transmitted sexually. And parents of sick children can become infected if it is to sleep with them in the same bed. Itch mite contagious at any stage, but the most common scabies is transferred to another person from the fertilized females, which greatly accelerates the process of developing the disease.

But how to get rid of scabies? Treatment of patients with scabies is aimed at the destruction of pathogens. For this purpose, acaricidal preparations - skabitsidy. Such drugs doctors prescribe only after carrying out all the necessary surveys and analyzes. If the patient has no desire to take unknown drugs to him, it can be treated at home. Treatment should begin with a damp clean the house and change the bed linen infected family member. Lingerie patient it is necessary to boil and iron hot iron on both sides.

In the treatment of scabies is necessary to observe hygiene,therefore the patient must wash to remove all manage on that are on the surface of the skin. Besides hot water expands pores, which promotes better penetration of drugs into the skin. It is necessary to cut the nails as short as possible, so that the ointment could get under them, because infected ticks by scratching places, under the nails hammered egg and then spread throughout the body. Scabies is treated only by external means, the most effective of which are sulfuric ointment or ointment Wilkinson, a part of which contains tar. Rub the need for five days in the evening, paying special attention to places of accumulation of the greatest number of ticks (elbows, fingers, belly). After all the procedures and recovery need to take a shower and change his bed.

There are other drugs for the disease, butthe most popular are these ointments. Although they have an unpleasant odor, and leave traces on clothes, but effective and not expensive, unlike other imported equipment. However, these agents are contraindicated for children and for people with sensitive skin. Ointments can irritate the mucous membranes. Therefore, in such cases it is necessary to purchase the more expensive drugs.

Scabies Treatment folk remedies maycarried out at home. To do this, you need to prepare an ointment composition resembles cream Wilkinson. For its preparation you need to take two teaspoons of sulfur, one spoon of tar, and a tablespoon of oil and a spoonful of soap. All this must be thoroughly mixed and applied to clean and dry the patient's body. Perform this treatment should be three to five days.

Also you can use ointments and other means for the treatment of, for example: