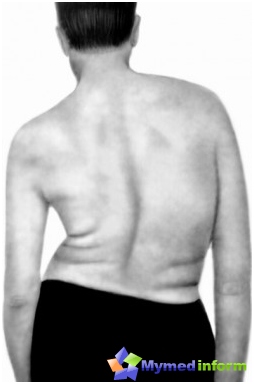 The disease was revealed fairlylong. The first to describe the formation of bones and scientists Pikolomini Etienne. Their findings are presented in the 16th century. However, prior to the description of the disease it was still far off. The next step towards the opening of this disease has made in the late 17th century scientist Brunner, who found a newborn baby with a splitting of the spine strange cavity, which stretched almost along the entire spinal cord. Finally able to find out everything only in the 19th century scholar Olivier Angers, who was able to prove that the process of formation of cavities in the spinal cord is an individual pathology, which was called "syringomyelia". The term was derived from two Greek words, such as: syrinx - «emptiness» and myelos - «the spinal cord."

This is a fairly rare disease. After all, it is found in 10 to 100 thousand people. And according to the observations of the men more often suffer from it at the age of 30-35 years. Women suffer less. In rare cases, the disease can develop in old age or in childhood. No relationship was marked by diseases of race or place of residence, but in practice there are cases when the disease were detected in all family members.

Disease develops unnoticed at first,so the people of it can not even guess. Unfortunately, this pathology is considered incurable, but sometimes it can still go into remission. Modern medicine in the presence of the disease allows for longer fulfilling life. Thus it is necessary to begin treatment as soon as possible.

Syringomyelia usually applies only tospine. In rare cases, the pathology touches the medulla oblongata. The reason for the formation of these cavities is the expansion of the spinal canal. The liquid which flows through it, encounters some obstacle, forcing the flow to further bend around these obstacles. As a result, the field of detours gradually formed cavity. At the same time begin to develop some cells that do not participate in the transmission of nerve impulses. These changes cause a violation of a full transfer of pulses from the brain to various organs and vice versa.

Unfortunately, the real reasons for which inbody occur such changes are still in question. Syringomyelia may be congenital or acquired. Congenital type of disease usually develops due to existing pathology in the embryo, for example, when properly laid the spinal cord.

The cause of this disease may alsobe a congenital abnormality of certain brain structures. One such disease is syndrome Dandy-Walker malformation and Arnold Chiari. In congenital type of syringomyelia, the cavity is usually formed in the upper portion of the thoracic. Sometimes the formation of cavities is observed in the lower part of the cervical spine. With regard to the type of acquired diseases, it is often a result of spinal cord injury or the presence of tumor in it. 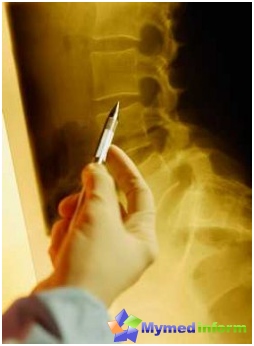 The most common signs of syringomyelia aresensory disturbances. Such violations are present in all patients. These symptoms manifest themselves as symptoms of irritation and loss of symptoms. The majority of patients also marked pain in the upper limbs, chest and neck and shoulder region. Pain is usually worse under the influence of physical exertion and hypothermia, and decreased in the rest.

Approximately half of the patients observedparesthesia, which manifest a sense of numbness, the passage of an electric current, pins and needles, as well as a sense of cold and burning. Patients usually seek help when they have pain and paresthesia. In conducting the survey, the patient is diagnosed violation of pain and temperature sensitivity. At the same time the patient is usually kept glubokomyshechnaya tactile and kinesthetic sensitivity. In violation of the sensitivity indicates that for the patient are painless received scratches, abrasions and bruises of hands. sensitivity disorders may be of varying severity and localization, but most such disorders are marked on the hands and the body in the form of so-called "polukurtki" and "jacket". One patient may be two or three focus sensitive disorders with varying degrees of depth. Dissociated type sensory disturbances commonly associated with damage to cells of the anterior white commissure or posterior horns of the spinal cord. If a cavity appears in the upper cervical spine, then there is a violation of the sensitivity on the face in areas zeldera. Violation glubokomyshechnoy sensitivity usually occurs only in patients whose process takes quite a long time.

In addition to sensory disturbances, patientsoften manifest movement disorders. It is worth noting that the extent of such violations is not as significant as a violation of the sensitivity. Moreover, these disorders usually appear only in the later stages of the disease. Due to the fact that the place of formation of pathological processes is often a cervical-thoracic spinal cord, the upper limbs are usually affected more often than the lower. At the same time, patients complain that decreased muscle strength in the hands. During the diagnosis in a patient detected such as a muscle wasting disease, sluggish paresis hand, hypotension, loss and reduction in tendon-periosteal reflexes, as well as the reduction of individual muscle fibers. The reason is a sluggish cuts or squeezing razraschenie anterior spinal horns.

In the later stages of the disease, due to thethe impact of the processes of neuronal damage in the pyramidal pathway in patients begin to develop symptoms conductor. These symptoms include muscle strength decline legs improving muscle tone. Also installed is increasing segmental reflexes and pathological signs Oppenheim, Babinski, Rossolimo and others. In some cases, one limb may show signs of both flaccid and spastic paresis. This pelvic function is usually not affected. 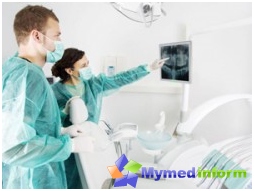 For the diagnosis and treatment ofdisease requires several specialists in various fields of medicine. In particular, the need neurologists, neurosurgeons, radiologists and orthopedists. Treatment is usually performed surgically, and its main focus is the suspension of the progression of existing lesions of the spinal cord, as well as the preservation of its functions required. Spinal cord surgery is usually performed while using its compression. Addition operations are performed during the manipulation necessary in order to produce deformation or adjustment required for applying shunts. To close the cystic formations conducted implanting fetal tissue.

Through surgery failsstabilize or even improve the symptoms of patients. Many experts are inclined to believe that surgical treatment is necessary only in cases where the patient has progressive neurological symptoms. At the same time, delay in operation with the progression of the disease can lead to irreversible damage to the spinal cord. In addition, it can cause the development of persistent neurological disorders.

With regard to medical treatment, itoften assigned to reduce swelling around the spinal cord. Patients to avoid increasing the pressure on the damaged sections are advised to avoid physical activity. If not treated in progressive symptoms, the patient can live six months to a year.