medicine
by admin
Chlorhexidine. Difficult to pronounce and remember the name. Nevertheless, it must be remembered. This affordable and reliable antiseptic should be in every medicine cabinet along with the brilliant green, iodine and hydrogen peroxide. At home, chlorhexidine as an antiseptic used to treat wounds, burns, and a variety of surfaces.

Chlorhexidine. Difficult to pronounce and remember the name. However, readers our site you must remember. This affordable and reliable antiseptic should be in every medicine cabinet along with the brilliant green, iodine and hydrogen peroxide.

Chlorhexidine, more precisely, Chlorhexidine digluconate -broad spectrum antiseptic. It has a rather complex chemical formula and the chemical name, the reduced gross formula S22H30Cl2N10. It has bactericidal activity. Effective against:

No effect on bacterial spores and fungi. 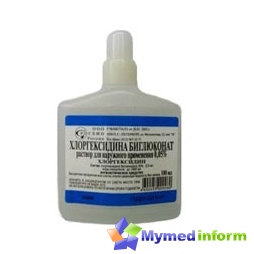 Chlorhexidine is available in forms such as:

There are a lot of drugs, which include chlorhexidine, among them:

Chlorhexidine is widely used in medicine and as askin antiseptic and as a disinfectant for surfaces and instruments. I found its application in such fields of medicine as surgery, dentistry, gynecology, urology, skin and venereal diseases, otolaryngology, and others. In all diseases chlorhexidine used topically. Chlorhexidine, along with other drugs used in the treatment of diseases such as Trichomonas coleitis, cervical erosion uterus, gingivitis, stomatitis, aphthae, periodontitis,alveolitis, tonsillitis and others, in the presence of sensitivity of the pathogen to chlorhexidine. In surgery, it is used before operations for disinfecting the patient’s skin, treating the hands of the surgeon, hands of the medical staff and the surgical field, as well as in postoperative patient care in the ENT and dentistry departments, and disinfection of removable dentures. At home, Chlorhexidine as an antiseptic is used to treat wounds, burns and various surfaces. Very often, Chlorhexidine can be found in the service of the beauty industry: in a hairdresser, beauty parlor, tattoo parlor. It is used to disinfect the instrument, wipe the skin before procedures, treat accidentally wounds. The use of chlorhexidine is an additional guarantee and indicator of disinfection care.

Contraindications to the use of chlorhexidine inone - hypersensitivity to the drug. The drug is approved for use in pregnant women, nursing mothers after consulting a doctor. In children, the drug is used with caution, after consultation with the doctor.

Chlorhexidine remains active in the presence ofblood impurities and organic matter (pus). Do not allow contact with chlorhexidine in the eye (except for a special formulation designed for eyewash), as well as contact with the meninges and auditory nerve (eg in traumatic brain injury).

MirSovetov Readers should note that Chlorhexidine is incompatible with soap and detergent (eg, containing lauryl sulfate), so:

Chlorhexidine is incompatible with iodine.

Chlorhexidine is compatible with ethanol, benzalkonium chloride (found in contraceptives for topical use and Pharmatex Benateks).

Method of administration and dosage should be viewed ininstructions for each individual product containing chlorhexidine. The home medicine cabinet should keep chlorhexidine (or Hexicon) 0.05%, which can be used to treat wounds for all family members, including pets. Chlorhexidine is also the house is used for disinfection of the puncture site after the piercing, wipe the place to be punctured twice a day for two weeks. Hexicon Candles are required in a handbag for women leading an active sex life with frequent change of partners. In the treatment of candles Hexicon usually necessary to apply twice a day, with the reception at night problems usually do not occur, but in daylight reception is better to use a gasket. Daily will not work - they are too thin; even reinforced, gaskets for critical days can be used, but may be uncomfortable. Ideal for the occasion urological pads lowest thickness, for example, Molimed Ultra Micro, which are sold in pharmacies.

Chlorhexidine Price depends on the release form, the minimum price of a vial of solution for external use only 0.05% is about 13 rubles.

Chlorhexidine - reliable antiseptic, widelyIt used in medicine and in those areas where cleanliness is important and quick disinfecting effect. mymedinform.com wished good health to their readers.