Home>Endocrinology>High growth - everything is good in moderation

High growth - everything is good in moderation

It is high - it is fashionable, but to a certainlimit. After all, with very high growth may be a violation of the internal organs. Read more about growth, normal and excessive, read the article.


Although tall today in fashion, there are limits to perfection. Too tall, but problems with the choice of clothes, brings serious health problems. 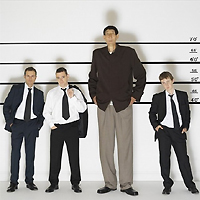 "The critical growth is considered to be 2 meters - menand 190 cm - females. If the person above, it is a question of gigantism, which requires treatment, - says head physician of the Clinic of endocrinology MMA. Sechenov, the candidate honey. Sciences Vyacheslav S. Pronin. - The reason for the rapid growth - pituitary tumor, which stimulates the release of growth hormone excess. organ weight significantly increases, and this leads to serious violations. Pituitary tumor itself with indomitable development can lead to serious neurological complications.

If excessive production of growth hormone occursuntil the completion of puberty (20 years), when the person is still visible growth zones in the bones, skeletal bones grow in length - developed gigantism. Such children are actively growing significantly different from classmates in the growth and physical development.

If the disease develops when the growth zonealready closed, the man "grows in width": it has increased hand, foot, head circumference and appearance changes significantly - it's called "acromegaly" (literally - the increase in the extremities). The disease causes a lot of health problems, and in the absence of adequate treatment of these patients die early. The tallest man in the world of American Robert Wadlow growth of 272 cm died at the age of twenty-two years.

If your child is significantly above their peersor you notice a change in his appearance described, it is necessary as soon as possible to address to the endocrinologist. The same applies to children who are stunted. The faster they send to pediatric endocrinologists, the more essential it can help. "

In addition to the actual values ​​of growth, it is very important,exactly when the baby is pulled considerably. Growth rates should be maximized in the first months of life and during puberty. The final figure depends on when puberty is over. How does it faster than most increased levels of sex hormones, the earlier closing of growth zones of long bones of the skeleton, and thus stops the growth.

The main role in how high willman plays a number of growth hormone produced by the pituitary gland - an endocrine gland in the brain. If he made a surplus, the child grows up under the eternal teasers "Get the little sparrow", if growth hormone is not enough to get it a matter of "when you start to eat porridge?".

The champion Robert considered among the giantsWadlow (USA) growth of 272 cm and a Chinese Zeng Tszinlyan that for 19 years has grown up to 248 cm The most famous couple of giants -. This Martin Bates (236 cm) and Anna Sven (220 cm), who were married in 1871 and gave birth to another one character from the Guinness Book of records as the birth weight of almost 11 kg. Poor baby had survived and turned into a museum exhibit health in Cleveland.

The increase in mammary glands in males