Violation of carbohydrate metabolism, decreasedblood glucose concentration - is hypoglycemia, in which case the diet is balanced content of protein, fat and carbohydrates. Hypoglycemia in diabetes may be due to an overdose of insulin. We speak about it. 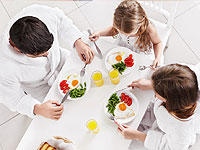 First of all, the cost of the causative factorsnoting the drug overdose of insulin in the treatment of diabetes, as well as the excessive synthesis of the hormone insulin in the pancreas hyperfunction. Hormonal changes and the lack of glycogen degradation, loss of liver cells, glycogen storage disease, malabsorption of carbohydrates in the intestine, swelling, or a critical organ failure, such as kidneys, hearts can also be a cause of hypoglycemia. In addition, this syndrome can result from malnutrition, aggravated by abuse of refined carbohydrates with a marked shortage of fiber, minerals and vitamins and occur when there is insufficient or late meal before a serious physical activity, consumption of alcohol.

The clinical picture of hypoglycemia, diet and prevention

When glucose reacts to enhancedthe secretion of the hormone insulin and falls below standards, developing hypoglycemia. This condition may occur when using certain medications, such as aspirin, beta-blockers or psychotropic drugs. There is a disorder of functions of many organs and tissues, but it is particularly sensitive to the deficit of sugar is the brain as glucose - is the main energy source for brain cells. In response to the lowering of blood sugar adrenal gland secrete epinephrine, whereby hepatic glycogen begins actively processed into glucose and its blood level rises. It is known that prolonged hypoglycemia is fraught with irreversible brain damage. Signs of energy starvation of brain tissue appear neyroglikopenicheskimi symptoms: memory impairment and motor coordination, speech, vision, headache, convulsions, loss of consciousness and coma. For an accurate diagnosis is an urgent need to measure glucose levels.

Reactive hypoglycemia observed with a sharpfalling glucose level that occurs 2-3 hours after a meal, manifested acute hunger, dizziness, tremor, palpitations, and due to excessive release of insulin in response to sugar contained in the food. Much of the glucose is converted into glycogen, which can be a ready source of glucose, if necessary. 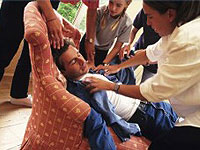 All patients were receiving insulin familiar withsymptoms of hypoglycaemia, have at their disposal the meter and trained methods of glucose measurement. Attacks of mild to moderate hypoglycemia cropped own admission glucose, in severe cases, is urgently needed injection of glucose and glucagon injection.

How to prevent an attack of hypoglycemia, and whatrules must be observed? Patients know that in addition to the meter must be in possession of "food first aid kit", which necessarily includes a few pieces of sugar, glucose tablets, a sugary drink, glucagon vial and syringe. The basic rules also apply timely meal with the obligatory amount of carbohydrates. It should be remembered that before exercise is recommended to take about 30-50 grams of carbohydrates required amount of trace elements the patient must be obtained from vegetables, fruits, whole grains in the use and wholemeal bread. It is advisable to use legumes, oats and barley porridge, apples and citrus fruits, avoiding sweets and bakery products of high-grade flour.