Once you have wiped his eyes and groped bulgein the century. "Barley - Barley does not?" - Puzzled you. If the lump does not hurt or almost no pain - quickly come to visit an ophthalmologist. After all, this is the lump may be no more than a chalazion. But more about this illness, see this article.


Chalazion is not contagious, but not harmless 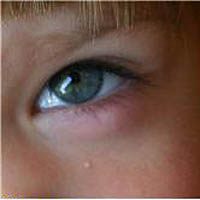 You rubbed her eyes and groped on the elastic centuryeducation up to a large hailstones, the skin over it is movable, touching virtually painless or cause very little pain. "What is it suddenly happened to the eye?" - You're wondering.

It - chalazion (Gradina) - proliferativechronic inflammation of the meibomian glands. It is a small swelling of the century, caused by the obstruction of a modified sebaceous (meibomian) glands century.
The result is a swollen lump protruding. Sometimes there is a festering, then joined signs of inflammation: pain, redness, eyelid skin can be spontaneous dissection with separation of content (pus) from the conjunctiva.

Chalazion may appear on both eyelids, causing redness, swelling and soreness in some cases. Chalazion develops after barley, hypothermia, but more often for no apparent reason.

Even if you first hear this name -chalazion, the disease is not so rare - it is 7.4% in the general structure of diseases century. Fearing that he would send someone from the family, it is not necessary - it is not contagious.

But to treat it should be, if only because otherwise this "Gradina" all the time will bother you, cause the desire to rub the eye. And in the case of red eyes and looks at all the patients.


Sovermennye approaches to the treatment of chalazion

Surgical treatment is to removepathologically altered secretion glands, excision of the capsule, overlaying a tight bandage. chalazion surgery usually is not difficult and is related to the number of operations performed on an outpatient basis.

However, as with other surgical interventions, while removing chalazion possible complications (infection, bleeding, and others.). After surgery, patients are under observation.

Known treatments are often ineffectivedue to the recurrence of the process. In modern ophthalmology widely developed laser treatment technology. Their advantage is bloodless, minimal trauma and aseptically. The choice of treatment technique is determined individually vrachom ophthalmologist.