What television does not spoil vision

New Year's Eve - the purchase of gifts,invited guests and a festive night planning. How can you do without TV? "Blue Screen" - a great gift for all your favorite holiday and faithful companion of the New Year celebration. But how to choose a worthy, and most importantly safe for TV health? Let the functional description and praise of the parameters screens to manufacturers of television sets and try to approach the issue from a medical point of view.


The first mass television in our country lookimpressive. Wooden box of impressive size with a small, 3 to 4 centimeter screen. To see something, it was attached to, or placed next to flat-spherical vessel filled with liquid (water, glycerin or castor oil). The vessel was working as a lens, increasing the black-and-white image. Add to this the ripples and screen flicker and get 15 minutes of viewing such TV fatigue and tension in the eyes.

Modern TV - a highlight of the interior -a stylish bar, a thickness of only a few centimeters, with perfect color image on the big screen with a bunch of different settings and functions. But is safe TV XXI century? Especially for our eyes?

From CRT to LED

Early AD TV as sourceimage (black and white) on the TV using a cathode ray tube (CRT). Inside it converted electrical signals into light, and thereby form an image on a CRT.

Then there was the color. The picture became clearer, but the brightness could be inhomogeneous (more pale frame to the periphery). Often, on the screen you can see the colored dots - a flaw in the CRT. From their tired eyes, dissipated attention.

The next significant step in the evolution of TV,and, respectively, and to increase the level of its security has become literally a parallel appearance of liquid crystal display (LCD or English LCD -. Liquid crystal display) and "plasma" models. The source of the imaging matrix steel which: based on liquid crystals backlit with fluorescent lamps, and on the basis of luminous cells with an inert gas, respectively. This enabled high-definition image with good color reproduction. A lack of CRT reduced all at once questions of radiation to "no".

Just recently, manufacturing companies comethe market with a new product - LED-TV. LED is an advanced LCD, in which the fluorescent lamps were replaced by light-emitting diodes (Light emitting diode). This will further increase the contrast of the image and make it more reliable color. In addition, LED-backlight has increased the speed of the matrix (the response time to the applied signal) that virtually eliminated the distortions of the rapid changes in the image.

What to look for when choosing a LED-TV

It turns out that the LED-TV is practically notadverse effect on our vision. However, the buyer should pay close attention to a number of parameters. Otherwise, the security and safety problems may come.

So, if you decide to buy a modernLED-TV, it is necessary to begin by defining the optimal screen size (diagonal length in inches) for your conditions. Doctors recommend to watch TV from a distance, which will be not less than five of its diagonals. For example, from your chair to the TV panel 4 meters. 4/5 = 0.8 m, or 80 cm - the length of the diagonal. To put this figure in inches (1 inch = about 2.5 cm), 80 cm divide by 2.5. So, on your choice will be among the models with a diagonal of 32 inches in the area. Figured dimensions of his room, felt?

Now let's get to the screen resolution. Resolution - a number of LEDs (pixels) per unit area. What is more, the picture is more clearly traced. However, let's say, it is easier to watch. However, with increasing number of pixels, and price. But not cheap to buy a model with a very high resolution screen makes no sense. No additional expensive equipment to enjoy them you can not. Therefore, guided by the values ​​of 1024 × 728, 1280 × 720 or 1388 × 768.

Contrast - The ratio of the brightness of the white to the black value, which may reflect the TV screen. The higher, the better for the eyes. There must be at least 800: 1 (for example, Samsung, Supra).

Definition - TV's ability to reproduce small and medium-sized parts with maximum image contrast. The higher, the better for the eyes. Depending on the screen resolution.

Brightness - The number of colors in the image, its saturation. The higher, the better. Sufficient importance - 300 cd / m2

viewing angle - How much you can deviate from the center of the screen left or right to see the picture virtually unchanged. Norm - not less than 170 degrees (for example, Supra, Philips, Sony).

Here are a couple of simple ways to determine the safety of the TV for health. And yet, when you choose to take a look in the first place to "Japanese". Still electronics - that is their strong point.

All in our hands

Despite the fact that most modern TVshave a uniform illumination of the matrix that increases the contrast of the image and therefore practically does not load eyes, let's listen to the advice of the doctor-ophthalmologist Veronica Svarinoy.

"Any activity tiring monotonous. Whether it's biking, weeding flower beds, or watching your favorite TV program. So try each hour to break away from the TV for at least 5 minutes. During this time you will have time to do some exercises to relax the eye muscles and remove their power. Exercises to do in order of increasing load. But while watching TV, observe basic rules of hygiene eyes. " 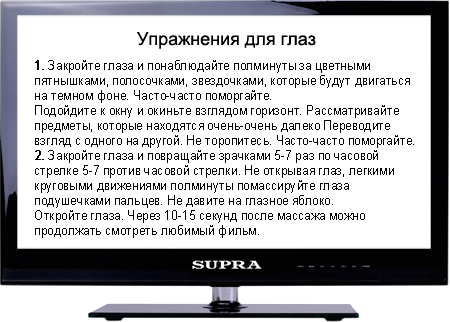