Home>gastroenterology>Peptic ulcer disease: how to live

Peptic ulcer disease: how to live

Why ulcer is formed? Who is more likely to suffer from this disease? Is it possible to cure ulcers without surgery? Is it true that the lady's finger for a cigarette more harmful than alcohol? - To these and other questions are answered by the patients physician-gastroenterologist VP Petrushevich.

- Why ulcer is formed?

- Experiences, stress dramatically increase the aciditygastric juice - this is the most frequent and the main factor in the development of peptic ulcer disease. Although the matter and smoking and irregular meals, and hormonal changes in the body.

- Yes it is. Women are much less susceptible to this disease. A ratio of about 1: 5.

- What happens in the body, why forms an ulcer?

With a stomach ulcer picture is somewhat different. In these patients, gastric acidity may be normal, even reduced, and yet the ulcer is formed. It is crucial to impaired gastric motility and its coordination between the stomach and the duodenum. Emission occurs bile from the duodenum into the stomach, bile acids damage the gastric mucosa. Moreover, such patients usually due to reduced gastric motility food in the stomach lingers longer. This stimulates more production of hydrochloric acid.


What are you reporting?

- How to recognize, where it formed an ulcer?

- Heartburn, acid regurgitation, a feeling of heaviness inthe stomach - is not necessarily a peptic ulcer. This may be gastro, and erosive gastritis, etc. First, the main feature of peptic ulcer -.. Pain. In duodenal ulcer pain are hungry, and after 1.5-2 hours after eating. And in patients with gastric ulcer pain occur in 20-30 minutes after eating. As a rule, it is easier if you eat something else - food neutralizes the hydrochloric acid, the irritation stops most ulcers gastric juice. But in each case the diagnosis of peptic ulcer requires confirmation.

The main method of diagnosis is simple, accessible andmastered practically everywhere - is endoscopic examination of the stomach and duodenum. It allows you to determine where the plague is precisely the surface or deep it is, to determine its size, nature, etc. Depending on the chosen this method of treatment -.. Conservative or surgical.

- And what are the complications?

- The most terrible - perforation, ulcer at the site wherea hole is formed and develops peritonitis. There may be bleeding happens very difficult, in such cases, emergency surgery is needed. Peptic ulcer disease can be complicated, and the narrowing of the stomach, which also requires surgical intervention. But timely conservative treatment usually avoids these complications.

- Why peptic ulcer disease is considered a precancerous condition?

- Ulcers in the duodenum against"Prosperous", they never reborn. Where increased acidity - there are no cancer! But a stomach ulcer (with normal or low acidity) during long-term chronic course can really degenerate into cancer. It occurs in 10-15% of patients with gastric ulcer, but only in cases where the ulcer not treated!

Duodenal ulcer todaytreated very successfully. Assign antacids (Almagelum, Aluminium phosphate gel), they neutralize the stomach acid to form a film on the surface of the ulcer, protecting it from the effects of hydrochloric acid and pepsin; drugs that inhibit gastric secretion, the so-called H2-blockers - gastrotsepin, cimetidine and famotidine preparations today, ultseran, they have little or no negative side effects.

An important and sometimes decisive, stage of treatment of peptic ulcer disease is to eliminate H. pylori infection for which antibiotics are appointed, are sensitive to this infection.

As a rule, appointed agents and indirect actions such as solkoseril. It is not an anti-ulcer, but not bad promotes epithelialization of ulcers and scarring.

- What usually lasts for a course of treatment?

- Duodenal ulcer usuallyrumen for 21 days. Since it is difficult to stomach ulcer. There ulcer edges are sealed, and the blood circulation in this area is usually broken, so long ulcer can not heal. If 3 months of treatment fail, in order to avoid complications question about the operation.

There are also running a duodenal ulcerulcer, ulcer when the bottom wall is not duodenum and nearby organ. Such ulcers treated conservatively is not only useless, but also dangerous, surgery is needed.


Treat, you can not hesitate! 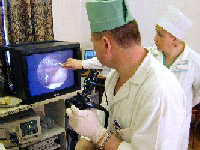 - What kinds of surgery for peptic ulcer disease?

- Gastric ulcer gastrectomy is performed -together with an ulcer of the stomach is removed 2/3. In patients who underwent resection, the acidity is practically zero. It removed a large part of the stomach area, which is produced by the gastric juice.

In duodenal ulcerthe last 20 years in our country, and abroad are widely used ablative surgery, such as crossing the vagus nerves that are responsible for the secretion of gastric juice. Thus it eliminates the stimulation of gastric juice, and the best option in such cases - the establishment of a zero acidity.

- And in some cases resort to ulcer suturing? As far as this method is effective?

- This operation is performed under emergencytestimony - when the ulcer complicated by perforation. Saving operation, but does not cure the patient of peptic ulcer disease. It is performed in debilitated patients with severe comorbidities, with a high prescription of perforations (12 to 24 hours or more). Alas, many come for surgery too late, especially the elderly patient - wait out the pain for days ...

- If a person unsuccessfully treated for drugs, then he still did elective surgery, does this mean that he will be healthy?

- If the operation is technically correct andin the proper amount, then the person becomes almost healthy. In cases of relapses need to look for other causes of peptic ulcer disease - disease of the pancreas, thyroid, etc...

- It is true that for ulcer cigarette more harmful than a shot of vodka?

- Poorly and that, and another. Especially in combination.