Children chlamydia develops gradually, and the disease is often delayed for months or even years.


What is this disease and why it occurs? 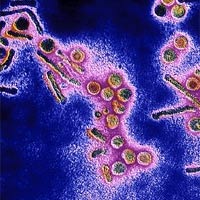 Chlamydia is caused by bacteria that are calledchlamydia. Known in the art three types of chlamydia, each of which may give rise to diseases: Chlamydia psittaci in birds spread and affect the child and adult in contact with them; Chlamydia pneumonia causes lung diseases (pneumonia); Chlamydia trachomatis - an infection that causes the pathogen is transmitted through sexual contact.

Chlamydia - a bacteria is very small in size,they are unable to produce energy for its own life cycle. In order to survive, they take up residence in the healthy host cells and use their energy. That's why chlamydia called intracellular parasites. They are able to penetrate into the cells of the conjunctiva eyes, respiratory tract mucosal gonads boys and girls.

Chlamydia is different from other infectiousDiseases that it is difficult to detect and cure. The fact that two of Chlamydia have cell shapes. First, when the bacteria gets inside a healthy cell and settles there. Absorbing the energy of the cell, it increases in size, and divided into the second shape. During this period, identify the disease very difficult (this is only possible thanks to a special study).

Ripening, chlamydia again turn into aoriginal shape. The entire process of division and maturation of Chlamydia takes 48 to 72 hours. Then the host cell bursts, chlamydia go out and hit the following groups of healthy cells - the first symptoms appear during this period. However, the process of maturing bacteria can stop at any stage. In this case, it is possible that the disease does not manifest itself even after months or years after infection. It features a long-term cough, a constant runny nose, itching in the perineum, vaginal discharge appears only in violation of the protective forces of the body baby. It takes a lot of time before it becomes clear that the cause of these disorders is chlamydia.


As the disease is transmitted kids?

Despite the fact that it is transmitted through sexual contact,a child becomes infected with chlamydia from a sick mother during pregnancy and childbirth. In that case, if the baby receives breast milk and good care, his immune system copes with the infection by inhibiting a certain time before the reproduction of chlamydia. The weakening of the body's defenses allow bacteria to continue the maturation and division, and then show signs of disease.

Time of occurrence of symptoms dependsthe degree of the baby's immune system maturity. For example, suspected chlamydial infection in apparently healthy newborns can only be the case if the parents have symptoms of the disease: vaginal discharge, itching in the perineum, the threat of termination of pregnancy, spontaneous abortions.


In what appears a disease?

If the baby is infected with chlamydia in utero,he begins a severe form of pneumonia, which makes itself felt in the first three months after birth. Chlamydia pneumonia are the cause of one third of newborns.

Symptoms of brain lesions appearearly and often go unnoticed because they have too general. Among them - irritability, trembling of the hands and feet, painful irrational crying, regurgitation. It takes a lot of time before the parents and child watching the doctor think of chlamydia as the reason for these disorders and disease, meanwhile, becomes prolonged and chronic.

Children chlamydia develops gradually, andthe disease is often delayed for months or even years. First, there are nasal discharge, then rapid breathing, coughing bouts of dry (temperature usually does not increase). If the disease is not treated, these symptoms are slowly increasing, sometimes decreasing, and then for no apparent reason reappear.

If chlamydia affect the gastrointestinal tract, there is bloating, rumbling stomach, disorders stool (diarrhea and constipation). Vomiting and regurgitation suggest that chlamydia at the kid runs hard.


Is it possible to detect chlamydia? 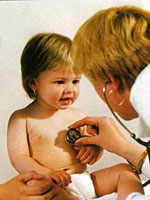 As already mentioned, recognize chlamydialinfection in infants is difficult, because the symptoms appear early and often go unnoticed because they have too general. They are often mistaken for the effects of the transferred baby hypoxia and / or birth injury, so after discharge from the hospital of kids under direct supervision of a neurologist.

If there are grounds ProfessionalsI assume that the newborn and his mom are infected with chlamydia, then on the third day after birth they conduct a survey: identify the pathogen Chlamydia smear the nasal cavity content, conjunctiva, vagina. If the result is negative studies, but the clinical signs of disease persist (conjunctivitis, rhinitis, vulva, and others.), Carried out blood tests on immunoglobulins.

The fact that the disease is at an acute stagedevelopment, increase in blood indicates a child of all three classes of immunoglobulins (IgA, IgG, IgM). If it has become chronic, the study shows IgA levels increase, IgG. Determining the level of immunoglobulins in the blood - this is the main method of diagnosis of infection control and treatment. However, it is effective only if the research is carried out not once, but several times, at different time intervals, which is not always to agree to the parents of sick children. Meanwhile, only the repeated laboratory tests prescribed by a doctor and allow to diagnose and evaluate the effectiveness of treatment.

The immune system of the child, as an adult,reacts to any infection generation of special substances that can kill bacteria. These substances called immunoglobulins or antibodies. For their education takes time, so only two weeks after chlamydia infection in the baby's blood appear antibodies thereto. Therefore, their absence does not mean that the baby is not chlamydia. If the child was infected during delivery, they will appear only in 3-4 weeks, which is why you need to re-examination.

Urogenital chlamydiosis difficult to detect andmothers. The fact that this can be done only during certain phases of the menstrual cycle. The smear vaginal discharge or cervical chlamydia determined from 10 th to 26 th day. In other periods the probability of detection of chlamydia is small.


How to treat chlamydia?

Chlamydia inside live cells, so they areresistant to antibiotics. Some of them may only suspend chlamydia division for a long time, but then, when the disease reappears, it will become pathogens resistant to this antibiotic.

To chlamydia treatment to be effective, you need toto choose the right medication and the time when they need to take. Otherwise, the disease can become chronic, and for a few years in baby's blood will circulate its pathogen? If a disease exacerbation periods are repeated, experts prescribe additional treatments. Unfortunately, in whatever form it proceeded chlamydia in children, acute or chronic, it entails serious complications - primarily the weakening of the immune system, and infertility.


Is it possible to prevent the spread of urogenital chlamydiosis?

Because this disease is transmitted through sexual contact, adults need to use protective equipment. The main way to prevent chlamydia is the condom.

Be screened for chlamydia is allWomen who plan to have children. This is important not only for the safety of the unborn child, but also for the mother's health. The fact that over time chlamydial infection can trigger the development of cancer. Kids just infected, become lifelong carriers of Chlamydia, and sooner or later infection "come to life". If this happens during puberty, the result of a long course of the disease can be infertility.