So it is not clear whether there ureaplasmosis onActually it is a fantasy or venereologists. We only know that at times in inflammatory diseases of the genitourinary system show no pathogens, but in large amounts determined ureaplasma.

Ureaplasmosis - a disease which is transmitted through sexual contact and is caused by ureaplasma.

Up to now there is such a disease unclear, there is onActually it is a fantasy or venereologists. We only know that at times in inflammatory diseases of the genitourinary system show no pathogens, but in large amounts determined ureaplasma. This is a small bacterium defectives, it is inferior in that, in the course of evolution, it lost its cell wall.

Some scientists believe that the ureaplasma -dangerous infectious agent. Others - that it is relatively harmless, but in certain conditions or in combination with other such seemingly innocuous microorganisms may cause inflammation.

There is only one way to pick upureaplasma: to have sex with someone who has it already is. As a result of contact between the genitals bacteria with mucus falls to the head of the penis into the vagina and vice versa. Domestic ureplazmoz infection (via towels, toilet seats, swimming pool, baths, dishes) is unlikely.

Caught in the genital tract orurethra, ureaplasma can be quiet, but may develop violent pathogenic activity. It all depends on the initial state of health infected person. In the worst case, ureaplasma begins to multiply rapidly and damaging everything that comes his way. ureaplasmosis arises. Men ureaplasma primarily affects the urethra and prostate, women - the vagina.

On average, from the time of infection until the first signs of the disease runs one month.


How do you recognize?

The fact that they are sick ureaplasmosis womenusually do not guess. After sexual intercourse with a sick partner, they feel great, no unpleasant symptoms and pain. Is that from time to time there are clear vaginal discharge, but they do not differ from those that are normal. One woman out of a hundred may be a burning sensation when urinating. And only when the ureaplasma has already led to an inflammation of the uterus or appendages, are typical nagging pains in the abdomen.

Men recognize the disease easier. On ureaplasmosis they learn on the clear discharge from the urethra, moderate pain and a burning sensation when urinating, and in chronic prostatitis symptoms for infection.

Ureaplasmosis If left untreated, it will harass human years, then increasing, then lay still. Most often the disease exacerbated by cold, stress and alcohol abuse.

Men ureaplasma may cause over the years toinflammation of the prostate (prostatitis) and narrowing of the urethra. Women - inflammation and adhesions in the fallopian tubes, as a result of infertility and an increased risk of ectopic pregnancy. It is very important to get rid of ureaplasmas before the alleged pregnancy, the infection can cause problems with pregnancy and fetal development of the violation. 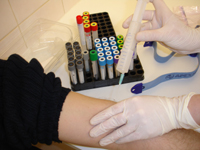 Ureaplasmosis Diagnosis should begin with a visit to a gynecologist (for women) and a urologist (for men). Infertility and inflammatory processes in the genital organs - a serious reason to hand over analyzes on a ureaplasma.

not be able to detect this bacterium in five minutes. It is not enough to see under the microscope ureaplasma (bacteriological culture), it is necessary to conduct additional studies complex: DNA diagnostics (PCR) method and direct immuofluorestsentsii. Only if ureaplasma detected in large numbers, and all the external signs of the disease there, the doctor has the right to make the diagnosis "ureaplasmosis". With the combination of several sexually transmitted infections require consultation venereologist or dermatologist.

In no case do not self! If ureaplasma not get destroyed immediately, it adjusts to the medicine and become even angrier.

The basic approach to treatment ureaplasmosis - patientIt takes special antibiotics as tablets or injections. In addition, the patient may be given drugs to lift immunity, prostate massage, physiotherapy.

Do not forget that at the same time will have to treat all sexual partners. Otherwise, reinfection ureaplasma inevitable.

When casual sex, always use a condom. At oral sex treat mucous membranes of the mouth and genitals with antiseptic solution - at least dilute the vodka.