In the vast majority of cases menstruationpreceded by a characteristic set of pain:. general malaise, fatigue, nagging pain and sacrum, etc. At very pronounced manifestations before menstruation, deprives women of efficiency, to talk about PMS.

Menstrual function It is a very important indicator of healthwomen, since the menstrual cycle regulation plays an important role not only a function of the ovaries (female gonads), and normal operation of the endocrine and central nervous systems, as well as internal organs. Mental trauma, prolonged stress, poor diet, leading as to exhaustion, and obesity can cause menstrual irregularities.

Among the menstrual disorders are most common are:

Primary amenorrhea - A situation in which a woman's menstruation has never been.

Secondary amenorrhea - A situation when menstruation was, but then there was cessation of menstruation for more than 3 months or forever.

physiologic amenorrhea - Is the absence of menstrual periods in a number of physiological state of the female body: before puberty; during pregnancy; sometimes during lactation; during menopause.

Artificially induced amenorrhea observed after removal of both ovaries or uterus.

Also distinguish false amenorrhea. In this case, there is no outflow of menstrual blood due to malformations of female genitalia. In this case, surgical treatment. Treatment of amenorrhea depends on the cause that caused the condition.

Often a combination of these women meetviolations. The factors leading to the weakening of menstruation are adverse living conditions that worsen the overall condition of the body, the violation of the endocrine glands function, acute and chronic infectious diseases, intoxication and other factors that lead to reduced ovarian function and reduced reproduction of sex hormones leads to lack of uterine blood flow and inferiority of the cyclic transformation of the endometrium.

This disruption of the menstrual cycle with increased menstrual function. The causes are acute inflammatory diseases of the female reproductive organs. 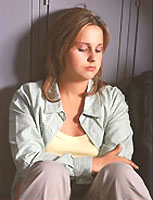 This syndrome can lead to anemia (anemia). All pathological condition in which weakened uterine capacity and processes of the uterine mucosa restore violated, lead to increased bleeding and increase the duration of menses (giperpolimenoreya). Strengthening menstruation contribute to problems with blood clotting. Increased menstrual periods with reduced menstrual cycles observed in the inferiority of the main phase of ovarian cycle.

Excessive and frequent menstruation can occura result of violations of the nervous system and the pituitary gland, the coordinating function of the ovaries. A common cause of prolonged, frequent and heavy menstrual periods are common diseases: heart disease, liver, metabolic disorders, diseases of the thyroid and other endocrine glands, hypovitaminosis C, K, infectious diseases and intoxication, leading to changes in the walls of blood vessels, disruption of the blood coagulation system, etc. . Often menorrhagia observed in inflammatory diseases and anomalies of position of genitals (pathological excesses, uterine prolapse), which is associated with inflammation, decrease in contractile ability of the uterus and slowing vosstanovleniyaslizistoy shell. Gipermenstrualny syndrome is often observed at the age hypoactivity of ovaries at puberty (the formation of ovaries) and menopause (ovarian failure), as well as uterine fibroids. Hypermenorrhoea characterized by more abundant than normal menstrual bleeding, blood loss greater than 200-300 ml; often bleeding menstrualnopodobnoe without blood clots. The menstrual cycle when hypermenorrhea has a normal duration.

Treatment should be started with the removal of the causegipermenstrualnogo syndrome. Prolonged and heavy menstruation uterine fibroids are an indication for surgical treatment. When ovarian hypofunction performed restorative therapy, nutrition, rational mode of work and rest. In cases where the causes have not been established and the menstrual cycle is not normal, it is necessary to conduct hormonal treatment.

This is in sharp painful menstruation. The causes are excess production of certain hormones that cause increased uterine contractions, also causes include abnormalities of the uterus position.

algomenorrhea or menalgiya (menalgia) - is with menstruationthe general state of disorder. Under normal menstruation in most women there is a malaise, a more or less severe pain in the abdomen and lower back, general weakness, ie, premenstrual syndrome (molimina menstrualia), which is regarded as a physiological phenomenon.

algomenoreya It called painful menstruation. The pain is limited only female sexual apparatus (mainly the uterus).

Menstruation is a common painful effects (deterioration of health, reduction of disability, headache, nausea, vomiting, and others.) Called dysmenorrhea.

Menses with sudden malaise and local and general character of the various painful phenomena called morbid or algomenorrhea or menalgiey.

Algodismenorei There are primary and secondary. Initial observed in women with early menstruation and often associated with any changes in the genital apparatus. In most cases, the primary algomenorrhea common in nulliparous women. Secondary algomenorrhea develops as a result of certain gynecological diseases (inflammatory disease, endometriosis, tumors, etc..) Or due to common causes (preceding menstruation were painless).

Most often, pain is dull, aching, localized in the abdomen and sacrum, often is cramping in nature, sometimes it gives in the thigh or in the anus area.

Algomenorrhea is not an independent disease, but a manifestation of other diseases, congenital malformations and functional disorders.

A major role in the origin of algodismenorei play the following factors.

Mechanical obstructionImpeding discharge of blood from the uterus: narrowing the cervical canal, the sharp bend of the uterus, uterine isthmus cicatricial contracture (after scraping et al.) - the uterus cause overflow hyperextension and its walls, which in turn results in increased irritability, and uterus receptors causes pain response. In addition, for the expulsion of the uterine cavity blood and rejects the functional layer of the epithelium in the presence of mechanical obstacles requires more intense contractions of the uterus, which are accompanied by pain.

In the presence of mechanical obstruction pain islocal character (algomenoreya) begins 1-2 days before menstruation. As soon as it becomes possible outflow of blood, that is. E. At the onset of menstruation, the pain decreases or disappears.

endocrine factor. The cause of painful menstruation is also a physiological effect of ovarian hormones, especially hormonal (estrogenic-progesterone) balance.

Treatment is directed at the painful menstruationon eliminating the causes of pain. Self-treatment is unacceptable, as the treatment technique detects only qualified gynecologist after survey and determine the cause algodismenorei. When pain needs rest, taking raslablyatsya muscles funds. Possible hormonal therapy, but it should be carried out depending on the saturation of the body hormonal given cause of dysmenorrhea.

When algodismenoree caused by inflammation in the genital area, you need anti-inflammatory, followed by physical therapy and spa treatment.

To eliminate mechanical obstaclescaused by congenital or acquired defects, surgical treatment (surgery, correcting the position of the uterus, scraping the lining of the uterus) and pelvic massage.

The woman appeared disorderly painlessbleeding of varying intensity. The general condition of the woman is dependent on massive bleeding. Such a violation can occur at any age. If the violation occurred in the child, the reasons may be unsteady function of the ovaries or blood disease. In this case, all necessary inspections performed, and hormonal therapy is prescribed. If the violation occurred in women of reproductive age, the causes can be acute inflammatory diseases of female genital sphere. In this case, prescribe anti-inflammatory therapy. If the violation occurs in menopausal women, it is regarded as a suspicion of cancer of the uterus. When massive bleeding shown urgent hospitalization.