The concept of endometrial hyperplasia

Hyperplasia in medicine is called an increase incell number in a tissue or organ, whereby the volume of the organ or tissue site increases. This growth of tissue or organ may signal the threat of cancer, and can exist independently of the presence or absence of cancer processes in the affected organ.

Hyperplastic processes are subject to many organs and tissues of the human body, particularly in women, the endometrium - mucous membrane lining the uterus.

Therefore, endometrial hyperplasia - abenign proliferation of endometrial tissue, but hyperplastic processes in the endometrium have unequal degree of development and in some cases, acquire the character of precancerous disease.

Endometrial hyperplasia is divided into the following types:

The differences between these types of hyperplasiainterested mainly health professionals, but some data may be important for "mere mortals". First of all it concerns the fact that not all types of endometrial hyperplasia may become cancers.

doctors believe precancersatypical hyperplasia (adenomatosis) endometrium in its diffuse and focal forms. Atypical hyperplasia endometrium enters endometrial cancer is about 10% of cases. The development of cancer process can be lengthy, in the early stages it can be cured quite successfully. But in order not to start the process, adenomatosis patients should be under careful especially the constant medical supervision.

As for the glandular and glandular-cystic hyperplasia, they are, in the opinion of most scientists are not considered precancerous diseases. 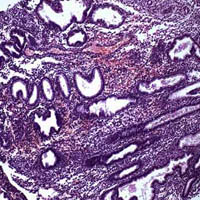 Causes of hyperplastic processesendometrial tissue can be different. Most often, this pathology develops due to hormonal imbalance, as well as carbohydrate, lipid, and other types of metabolism.

An important role is played by heredityburdened, the presence of uterine fibroids, cancer of reproductive organs and breast cancer, hypertension and other diseases, manifestations damaging effects during fetal development period of the disease in puberty and menstrual disorders caused by them and later reproductive function.

The emergence of hyperplasia in adulthood is often preceded transferred gynecological diseases, abortion, surgery on the genitals.

In addition, we can say that some of the state of the body, without being the direct cause of the development of endometrial hyperplasia, accompanied him this:

As for the immediate causes ofendometrial hyperplasia, then they are most often some ovulation disorders, which are characterized by absolute or relative hyperestrogenia. This pathology is more common in adolescent girls and women in premenopausal, and less child-bearing age, subject to unstable regulation of reproductive function.