Staphylococci (from the Greek slaphyle -. «Bunch» and coccus - «globular") under a microscope look like
grape bunch. In nature, there are many members of the genus Staphylococcus, of which only three are capable of causing disease in humans. The most dangerous Staphylococcus aureus, which is opportunistic pathogens (disease causing immunity while reducing).

Normally staphylococci inhabit human skin as well as on the oral mucosa, and nasal pharynx. Other representatives of the normal microflora inhibit their further
Spread. In healthy people, the onslaught of disease-causing microbes balanced immune
response and active production of antibodies. Staphylococcus begins to "raise their heads" when the body does not
can give him a fitting rebuff. The greatest danger of these bacteria are for premature and
debilitated children. Furthermore, a degree of importance for the development of infection
pathogenic microorganism. In some cases, staphylococcal infection occurs when other types of micro-organisms that make up the normal microflora, oppressed by the use of antibiotics, which have no effect on Staphylococcus aureus.

Staphylococcus aureus causes a whole range ofpurulent diseases until sepsis - blood poisoning and toxic syndromes - penetration of bacterial toxins into the bloodstream. Infection usually occurs by contact (through care items, laundry, mother's hands and personnel) and through breast milk in the presence of crack nipples, mastitis. Infection is also possible child in utero and during birth. When it is said that in the hospital found staphylococcus, it is meant that microbes found in swabs from the walls and furniture or the hands of medical personnel.

Since the development of the picture of the disease is related to the level of individual immunity, nor a form of staph infection is not considered highly contagious.

The children of the first year of life the disease,caused by staphylococci, can be divided into two major groups: local inflammatory processes and generalized infection or sepsis. These microorganisms can cause conjunctivitis, omphalitis (inflammation of the area of ​​the umbilical ring), skin lesions and soft tissue (psevdofurunkulez, vezikulopustulez, pemphigus or pemphigus newborns, "scalded skin syndrome", abscesses, cellulitis), enterocolitis (inflammation of the small intestine and colon).

"Visiting card" of any staphylococcal lesion is the brightness of the symptoms of the disease.

Staphylococcal conjunctivitis is characterized by marked swelling of the eyelids, moderate photophobia,
copious purulent discharge from the eyes.

Omphalitis - inflammation of the umbilical wound caused by staphylococcus - also accompanied by a pronounced
swelling of the umbilical ring, redness of the tissues, moderate or abundant purulent discharge from the wound.
We often observe redness,rising stripe toward the sternum in the course of the umbilical vein, indicating that the vein involvement in the inflammatory process and the dissemination of infection on it. On palpation the doctor detects a thickening of the veins and seal in the form of a plait.

Psevdofurunkulez newborns isinflammation of the sweat glands (unlike true furunculosis which is inflammation of the sebaceous glands) caused by staphylococci. The disease is characterized by the appearance of compacted reddened nodules - mainly in the folds of the skin, where there are a greater number of sweat glands. In the future, these nodules suppurate.

Development vezikulopustuleza (literally translated as "festering blisters") associated with the elaboration of
some strains of Staphylococcus exfoliative causing peeling of the skin epithelium with
the formation of bubbles. On the skin there are bubbles of different sizes with muddy contents. They are easy to
burst, leaving the damaged surface, which quickly covered with a crust. If defeat
generalized skin (a process affects the wholethe skin surface), talking about pemphigus, pemphigus or newborn. In this disease, the bubbles are usually applied to the back, abdomen, inner limb surface. Sometimes pemphigus occurs in severe form of malignant exfoliative dermatitis (Ritter's disease), also known as "scalded skin syndrome", in which the epithelial desquamation takes place large plates, leaving huge exposed surfaces. Leads to severe intoxication and disorders of body functions, exfoliative dermatitis is often complicated by the development of sepsis. Abscess - an abscess accompanied by redness of the surface and seal the deep layers of the skin with the formation of purulent cavity in the center.

Cellulitis - purulent inflammation of the subcutaneous fat, which is often accompanied by necrosis
(Necrosis) of skin over it. Often it occurs when too tight swaddling causes necrosis area adipose tissue, and bacteria penetrate the dead tissue from the bloodstream.

Furthermore, Staphylococcus can cause suppurativemastitis (occurs mainly on the physiological background of mastitis - the natural breast enlargement in the first week of life the baby), abscess (purulent inflammation of adipose tissue in the anus).

In any of these processes, local symptoms may be accompanied by a violation of the general
state, fever. The child is not enough putting on weight in the overall analysis
blood shows signs of inflammatory response.

Enterocolitis primarily manifests itselfchair disorder. There is clearly visible "handwriting" staph, stools watery, abundant up to 8-10 times a day with mucus, sometimes with blood. He quickly causes the development of diaper rash, persistent and often severe. The disease may begin suddenly - with abdominal pain, vomiting, diarrhea at a low temperature. The character of the same chair.

Sepsis - a common form of bacterial infection occurring on the background of immunodeficiency when
the body does not have the ability to limit the damage and neutralize the pathogen. For development
Sepsis is very important degree of microbial colonization (t. e. the number of fallen
microorganisms), which depends on the nature and duration of labor, childbirth, the quality of care of the newborn and the state sanitary-epidemiological regime in the institution.

In most cases, the penetration of bacteria occurs during childbirth or
postpartum (intrauterine sepsis - a phenomenon, fortunately, extremely rare, but in the case of
occurrence of he usually has a fulminant course). Atrium can serve
skin and mucous membranes and respiratory tract and gastrointestinal kishechnyytrakt, but in 60% of all cases of primary
septic focus is located in the umbilical wound. Further spread is going to
blood. The severity of the common manifestations often not the insignificance of the local changes, and
stihanie local inflammation is not accompanied by the improvement of the general condition.

There are two clinical forms of sepsis -septicopyemia, which is characterized by the development of purulent foci (metastases) in various organs and tissues, and septicemia - without septic metastases. When septicemia leading a picture of infectious toxicosis: significantly affected overall, the initial concern is replaced by lethargy, appetite disappears, there are frequent regurgitation, sometimes mixed with bile, unstable stool, bloating, temperature reaction (reduction or increase in temperature), edema syndrome, pallor, and then gray color and marbling of the skin, muscle hypotonia, changes of the organs. Septicemia may complicate accession pneumonia, worsening of blood clotting and bleeding in the skin, mucous membranes and internal organs. 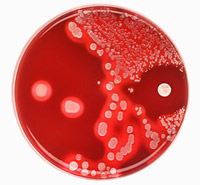 crops most widely held investigatedmaterial (blood, pus, feces, breast milk, and so on. d.) on special culture media and then assayed grown colonies of microbes, including under a microscope. This method allows not only to determine the type of microorganism, but also explore
microbial sensitivity to antibiotics. It should be noted that this method requires a certain
time (5-7 days) for treatment of indicationsadministered antibiotics early days with a broad spectrum of disease. In addition, often carried out phage typing of staphylococci isolated - detection sensitivity to certain viruses - phages. On the one hand, it allows you to answer the question about the source of infection, on the other - to prescribe the appropriate treatment for the phage.

Let's say a few words about sowing breast milk flora. The need for this arises when
suspected development of infection in a child when it is necessary to establish the source of infection.
Reins can be frustration of a chair, skin inflammation, as well as other situations,
when it can be assumed that the source of infectionis breast milk. Before analysis for decanting milk hands carefully handled and breasts, and then 70% ethyl alcohol - nipple and areola area. A few milliliters of milk decanted, and only then carry out sampling for analysis in sterile tubes.

When staph infection is necessarily spent topical treatment of inflammatory foci, with
violation of general condition becomes necessary appointment of antibacterial drugs. Of
local antibacterial drugs effective against staphylococci sintomitsinovaja
emulsion oleandomitsinovaya ointment baktroban. For systemic effect at a staph infection
used antibiotics groups semisyntheticpenicillin and cephalosporins. In addition, use special products in which a high concentration of antibodies antistaphylococcal. These drugs include antistaphylococcal immunoglobulin antistaphylococcal plasma. Similar properties have human immunoglobulin preparations, but they are not only antistaphylococcal antibodies and antibodies against many other infections. As an example pentaglobin, Octagam. The new word in the treatment of localized forms of staph infection is the use of phages. The advantage of these products is that they do not act on the microbes and other cells of the body, hence, do not cause the development of dysbiosis and other complications. They are not used in the treatment of severe infections and generalized forms, since their effect is developing after an average of 48 hours.

For the treatment of conjunctivitis used rinsing with a weak solution of potassium permanganate
( "Manganese") with subsequent instillation albutsida 20-30% strength solution (sulfatsil sodium) or
special eye drops with solutions of antibiotics. These procedures are carried out at least 3-5 times a
day.

omphalitis Treatment consists of a daily processing umbilical wound with 3% hydrogen peroxide solution
followed by drying is 70% alcohol and lubrication 1 - 2% solution of brilliant
green or 3-5% - ing permanganate solutionpotassium. With substantial infiltration (seal) fabric bandage with ointment Vishnevsky, purulent secretions (when confirmation of staphylococcal nature of inflammation) - ointments with antibiotics. In violation of the general condition of the child and the dangers of generalization of infection using antibiotic injections.

Exfoliative dermatitis to be treated with antibiotics, are also used antistaphylococcal
antistaphylococcal immunoglobulin or plasma. In this disease, the autopsy carried out bubbles,
Toilet skin with 0.1% potassium permanganate solution, its constant hydration saline,
Antibacterial ointment used.

Treatment of abscesses and abscesses in the first place lies in the opening of the pus cavity and providing drainage. Furthermore, when these diseases are usually administered antibiotics.

When staphylococcal enterocolitis naznachachenie antibacterial drugs is determined by the weight
the patient's condition. As with any form of the disease, effectively appoint the phages. In the case of food poisoning, it is likely to need hospitalization. At the beginning
disease good effect can give gastric lavage. Furthermore, special attention should be paid to
rehydration (replenish fluid lost by adiarrhea and vomiting). In subacute enterocolitis, when the general condition suffers a little, there is no vomiting, and clinical manifestations of the disorder are reduced to the chair, the task is to restore the normal microflora of the gastrointestinal tract. To this end, establishing breast feeding (if necessary, a treatment of the mother), sometimes prescribe medications that contribute to the normalization of microflora.

Sepsis Treatment obyazatelnodolzhno be comprehensive. It napravlenone only to combat
causative agent, but also the stimulation and recovery of the body's defenses. In this case, the child
administered antibiotics (usually intravenously),antistaphylococcal immunoglobulin antistaphylococcal plasma and preparations of human immunoglobulin; transfusions of plasma and direct transfusion krovi.Krome addition, the correction of disturbed body functions and symptomatic treatment. It is important to establish breastfeeding, and if this is impossible - the use of non-pasteurized milk, and of expressed immediately before feeding.

When the massive colonization of Staphylococcus milk - in the amount of more than 250 column forming units
1 ml of bacteria in milk, and also in the case ofclinical manifestations of the mother infection (mastitis, endometritis, tonsillitis, etc.), it is necessary to temporarily transfer the child on artificial feeding. When nonmassive colonization continues feeding with expressed breast milk pasteurized.

Preventing Staph InfectionIt provides early detection and treatment of foci of chronic infection in pregnant women, warning them of acute infections, creating the conditions for a child born on time and healthy, proper management of labor, respect for anti-epidemic measures and personal hygiene, breast feeding, proper care of the newborn.