It has long been known to the harmful effects of alcoholbeverages on the human body. However, still there is an erroneous opinion "favorable" effects of alcohol on the processes of absorption and digestion of food, as well as its "medicinal" properties, such as pancreatitis. 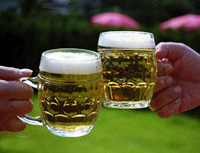 Is it true that alcohol can cause pancreatitis?

In 65% of cases it is possible to trace a direct linkbetween prolonged intake of alcoholic beverages, and pancreatic cancer. This alcohol is considered one of the most frequent (80%) the causes leading to the development of inflammatory diseases of the pancreas - pancreatitis.

What is pancreatitis? It is an inflammation of the pancreas due to the impact of prematurely activated pancreatic enzymes in the gland itself, lead to its "self-digestion" and subsequent necrosis.

Pancreatitis can be acute and chronic

For the development of an attack of acute pancreatitis absolute amount taken alcohol it is not critical, as, indeed, and the type of beverage.

The first glass may be the last,because, despite the significant progress made in medicine, the prognosis is always serious, conservative treatment is ineffective, and mortality from acute pancreatitis and today remains high.

For acute pancreatitis characterized by pain in the upperabdomen, most of herpes character. Pain may spread throughout the stomach, accompanied by nausea, vomiting. The pain is sometimes so severe that patients lose consciousness. With all the variety of forms of acute pancreatitis, its clinical manifestations has one thing in common.

Chronic pancreatitis develops as a consequencesuffering acute. Although it noted that in 5-10 years from the start of alcohol abuse first signs of chronic alcoholic pancreatitis. And women in such cases, the duration of the disease of alcohol is almost one and a half times shorter than that of men.

As the prevention of pancreatitis can recommend good nutrition, with the exception of alcoholic drinks reception, especially in combination with fatty food and plentiful food, smoking cessation.

It has been observed that the renunciation of the use of alcoholoften it occurs a substantial reduction of pathological changes in the pancreas, and even an improvement in partial recovery of its functions. Therefore, discontinuation of alcoholic beverages - the key to successful treatment of pancreatitis.

* ascites - Accumulation of free fluid in the abdominal cavity, resulting in an increase volume of stomach.