Signs of drug use

Signs of intake of specific drugs, ie.ie what happens to the drug addict as a result of receiving the one or the other drug. I do not want to say that if you find a child - needles, syringes, grass-like green dill etc items, or see the traces of injections, you yourself should be clear what that means.

Common symptoms of drug use

Differences in characteristics depending on the drug

At the use of cannabis - A drug addict dilated pupils, red eyes,Lip redness, dryness in the mouth ( "dry trees"). Addict mobile, all on the move. This accelerated, hasty. Very true priznak- appetite, usually at the end of intoxication.

When receiving opiates - Drowsiness at inopportune moments( "Cuts") can forget about prikurennoy cigarette and burned, or dropping it periodically wakes up and immediately begins to take part in the conversation. This slow addict, he drawls, may several times to talk about the same. In this state, he is good-natured, calm, if he does not interfere. Very true priznak- pupil, which is unusually narrow, does not react to light, ie, does not expand ( "stranded SPAR"). Leather-pale, but his lips are swollen, reddened. Greatly reduced pain sensitivity. Total priznak- is an abnormality of sleep and wakefulness (go to bed late and late risers (if any drugs or money)). 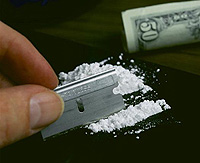 When receiving psychostimulants - Addict unusually lively, swift inactions and decisions. He can not sit still. Very quickly, say, jump from one subject to another. Dilated pupils. Quickly perform all the cases. If the addict is a drug or money on him, he can be in this state for several days. Some stimulants greatly increase sexual desire addict, so they often use stimulants alone with a woman. Addicts may zannimatsya any one thing for a few hours, for example to get out of the house.

Upon receipt of hallucinogens - Indications derived from the name, varietygallyutsinatsii- visual when the addict seen different rats-animals, crocodiles, flies, beetles, snakes, he can look at the floor, and it seems that there is a swamp with snakes, from the TV someone can talk to him and so on, gallyutsinatsii- hearing voices heard when the addict, someone said to him, an addict can talk with this "someone". Prolonged use or discontinuation often depression, psychoses.

When taken sleeping pills - Similar to alcohol intoxication. Slurred speech, zapletayuschuyasya. Sometimes a dry mouth. Coordination of movements is broken. When taken some sleeping pills in large doses may be- hallucinations.

Upon receiving the volatile narcotic active substances - Also reminds drunkenness, noisychallenging behavior. From baby smell acetone, gasoline, glue "Moment". Often there are hallucinations due to their teens and begin to use, hallucinations they call "cartoons".

By definition WHO dependence (drug andsubstance abuse) - a state of periodic or chronic intoxication caused by the use of natural or synthetic substances, characterized by the following features: