Very many people in today's Russia, havingrelative in the family suffering from drug addiction known expression: "Who tried the poppy tears - will cry for life", or more briefly and precisely: - "former drug addicts do not happen!"

This is taken from the slang used by drug addicts. They could not be more aptly express the main problem faced by doctors all over the world when trying to treat heroin addiction. In Russian literature is the so-called "syndrome of pathological craving for the drug," which accompanies the treated addict all my life, with age becomes paroxysmal in nature, somewhat weakened, but not disappear completely never.

"Pathological craving syndrome" occursimmediately after the cessation of drug use is overvalued dominant structure type and is characterized by deep disorders of sleep mechanisms, unprovoked attacks of depression, mood swings, aggression and emotional flattening the profile. "

To an untrained reader to understand howpainful these experiences and what moral effort is not an addict to resume drug use - imagine that out of your diet suddenly disappeared ordinary table salt and all the spices. Whatever food you did not try, it is tasteless. If you previously did not like salty - the complete absence of salt at first somewhat annoying, but a month later you're ready for some salt crystals to give anything. For example, wild animals overcome the huge distance, often risking their lives in search of natural salt. Imagine the rest of your life you have to live without salt, and then it becomes understandable tense state of mind of the addict who refused to heroin. The most complete description of this intractable problem to date is given in the Guide to Addiction (Ivanec 2001).

Heroin addict, passed a full coursetreatment in the best clinics abroad, or in a well-equipped domestic center, can consider itself completely healthy and requires perseverance observation expensive rehabilitation, which does not result in the majority of cases to a complete cessation of drug use.

Relentless statistics show that 85%past patients complete treatment and rehabilitation of returning to the use of the drug in less than a year. Among drug users to stop using drugs without the help of doctors - the percentage is even lower (5% -7%). This gives rise to a deep pessimism not only among themselves drug users, their families, but also for doctors, politicians, bureaucrats. Whatever funds invested in any treatment - is not that a full-fledged member of society, the citizen and the worker, and people are constantly forced to fight with itself, in other words - a drug addict in remission. It should be noted another scary fact; If seven years ago, the average length of life of a drug addict in Russia was 7-8 years - it is now only 4-5 years, and are dying mainly Russian, which greatly exacerbates the already not brilliant demographics. In other words, drug addiction - a disease with a 85% -95% mortality! To illustrate the above, the graphs. 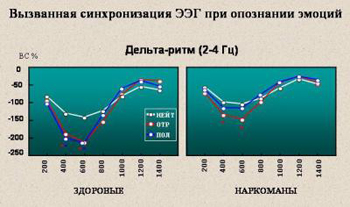 Before you two pictures of emotionalHuman space obtained by encephalography high resolution and processed according to the method of synchronization caused. The left chart - a graphic representation of the emotional space of the average person has never used drugs. It is clearly seen that the blue graph of positive emotions and negative emotions red graph on the 200 and 400 milliseconds was significantly different from the white line graph of neutral emotions in a healthy person. The graph on the right was obtained from a study using the same methodology emotional space in heroin addicts, who for three years does not use any drugs, that is in a state of remission. From the right graph shows that, despite a three-year break from drug use positive emotions are perceived as neutral, in other words, are not perceived at all - blue line runs next to the white. Negative emotions as more ancient and important for survival, was significantly different from the neutral (white line), but do not reach such intensity as that of ordinary people.

In other words - a heroin addict who refusedof heroin use, nothing is happy and the whole world sees in gray, except that it does not feel fully normal feelings of fear, so he is not afraid of no laws, no police. Thus, both the schedule could not be better illustrated syndrome craving for the drug, translating his understanding of the field of psychology in the area of ​​psychophysiology, which offers the possibility of emotions, not just their subjective description.

All the world's known, modern drugs andmethods for the treatment of heroin addiction, moreover their various combinations and modifications are not able to change the aforesaid statistics. Syndrome of pathological inclination is irresistible.

I spent a lot of years in the Clinical InstituteImmunology SB RAMS animal studies and human clinical trials have been directed at solving the problem is to overcome the pathological craving syndrome. Designed and patented method (patent №2290947) is based on the use of the infusion of soluble products of the immune system cells - cytokines in the background mode psychosensory deprivation (patient isolation from any external stimuli). It gives a striking result. Craving disappear, emotions are restored. After many years of experiments we found that cytokines can be administered not only intravenously. Using some of the anatomical features of the circulation using a specially selected composition and their equipment can be administered by inhalation via the respiratory tract. In this case it is possible to avoid invasive procedures, which are very difficult in patients with long standing drug addiction.

Furthermore, when the inhalation procedure cytokinesin sufficient concentration directly into the central nervous system, and in those states where anatomically localized opioid reward system. They are free to pass the blood-brain barrier and provide sufficient (therapeutic) concentrations at points of the application - the opiate receptors. Cytokines are special molecules with a protein or other structure that transmit information in the immune and nervous system. Currently, cytokines are considered by scientists as the "medicine of the 21st century." Now it is fashionable to call nanotechnology. Since the function of the nervous system cells are regulated with the participation of cytokines, the use of drugs based on them has a pronounced effect on the psycho-emotional sphere of a person, including behavioral reactions.

The reason for the introduction of Cytokine therapy inthe practice of drug treatment were the previously obtained data on the ability of immune system cells and their products (cytokines) to prevent the development abstinetnogo syndrome after drug withdrawal in experimental animals for the structure and the effects of heroin is very similar to produced by the body's endorphins and enkephalins - the main mediators (ie cytokines) opiate reward system. But in contrast to the natural endorphins, heroin is capable of producing extremely high concentration in the application points (opioid receptors).

If you compare with your own key to the endorphinsthe castle, the heroine serves as a rough but effective lockpick. It is a long time if not forever change the thresholds of opiate receptors and last longer adequately respond to natural concentrations own endorphins. Actually this is neurophysiological basis of pathological craving syndrome. Cytokine there are so many, it is currently at the Institute of Immunology chosen such a combination thereof, which in clinical trials in humans overcome syndrome of craving for the drug including depressive component and prescribe treatment after a full member of society, does not need further costly rehabilitation.

Many volunteers, past experimentaltreatment - received their education after the application of cytokines, work, have children and no craving not experience. Long-term clinical trials of this method of treatment of opioid addiction, conducted by members of the SB RAMS, showed persistent achieving long-term remission (from 3 to 8 years), more than half of patients. Individuals many years used heroin radically different motivation, restored full emotion, independent physiological sleep, ability to work. Heroin addicts after treatment have no desire to return to the use of heroin, many even get rid of tobacco dependence.

For comparison; in leadingRussia and the world the real effectiveness of the clinics does not exceed 5 - 15%. The vast majority of serious professionals hitherto considered incurable heroin addiction and pathological craving for the drug syndrome insurmountable. (Ivanec, 2001.).

For further researchyou need to include special provisions on the basis of a specialized clinic. Neither the state nor the existing funds money for research is not isolated. Nevertheless, a group of scientists do not give up hope that their efforts and the results will be in demand for as much continue research in this direction.