Edible fungi as the cause of polyneuropathy

The fact that Russia now and then fixed casesedible mushroom poisoning, becomes a trend. A serious disease, developing as a result of intoxication - polyneuropathy - often leads to death. Why is this happening? The answer you will find in this article. 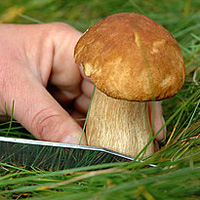 If last year to mid-AugustGosepidnadzor reported four died, whereas this year, according to mid-July in Russia died of mushroom poisoning has five. And that's not all: on Saturday July 17 to 10 people with the same diagnosis were taken by helicopter from Novokubansk Krasnodar. One of the women died during hospitalization. The survivors are now in intensive care, two children are connected to the artificial kidney. All the victims - residents of one street: at the gala dinner with mushrooms invited neighbors.

"White" mushrooms brought home the head of the family,truck drivers, collect them in the Voronezh region. This Russian region long been a leader in the number of mushroom poisoning. Over the last 5 years in the Voronezh region of mushroom poisoning killed 128 people. The worst was in 1992, when the hospital turned out to be more than 400 mushroom pickers, 44 of whom died, and 1999, when 28 people died from the poisoned mushrooms 357.

Local experts disagree about howwhy their area has become such an "anomalous". Some of them believe that the problem - purely statistical. In the region because of its geographical position grows a huge number of different fungi: about 500 species. Among them - more than 90 species of poisonous and inedible. Consequently, mushroom pickers often are mistaken.

Another version seems more realistic - toshe explains why people poisoned by mushrooms, which have always been considered edible. Mushrooms and mycelium (mycelium) as a sponge absorb all harmful substances and heavy metals, are going in the ground. So even normal nipples, collected from a chemical plant, is able to send a mushroom picker to the light. In the Voronezh region enough factories that emit harmful substances into the atmosphere. Then, the whole chemistry of rain returns to the ground and accumulate in mushrooms.

And by the way, for this fungus completelynecessarily mutate. "No mushrooms mutants being talked about in recent years, does not exist!" - Believes the chief sanitary doctor of the Voronezh region Mikhail Chubirko.

As edible mushrooms can cause polyneuropathy

Ukrainian doctors, who tried to find reasonsmushroom poisonings in the Mykolaiv region, also came to the conclusion that the fungi mutations have nothing to do with it. In his article "Diagnosis and treatment of polyneuropathy caused by mushroom poisoning," the authors point out that by the year 2002 in the Mykolaiv region, about 200 people were ill severe polyneuropathy, occurred after ingestion of edible fungi: mushrooms and chanterelles.

Polyneuropathy, which developed as a result ofmushroom poisoning, pain begins in the hands and feet. With the progression of the disease appear edema, atrophic changes in the skin and other symptoms. Reduced appetite, disturbed sleep, develop severe neuroticism. Since most health workers are not aware of the possibilities of development of polyneuropathy due to the ingestion of mushrooms, the first cases of the disease associated with the flu, nervous or physical overexertion, osteochondrosis and other causes. Patients treated by physicians of different specialties, which delayed the start of a rational therapy.

Mushrooms that led to polyneuropathy, collected, as a rule, experienced pickers repeatedly Eat similar fungi without any consequences.


It was also found that the methods of cookingtreating the fungi do not affect the development of polyneuropathy. Mysterious poison remains: thermally stable, is not destroyed by cooking, roasting, drying and pickling. Storage of dried and canned mushrooms does not reduce the likelihood of poisoning. When boiling poison can sublime steam: the researchers observed vapor poisoning, cook inhaled from the boiler during cooking mushrooms. Registered illness polyneuropathy baby who was breast-fed.

Focusing on the place of gathering mushrooms (shelterbelts,near fields with cereals and sunflowers), as well as the fact that by eating identical mushrooms in the spring of poisoning it is extremely rare, the researchers suggested that the substance causing the poisoning, can be one of the poisons used for rodent control. Get mouse poison migrate into adjacent fields with shelterbelts and abandoned gardens where and die. The products of their decomposition in combination with pesticides absorb mushrooms. The most likely poison, causing polyneuropathy, named zinc phosphide.

According to Ukrainian medical methodshealth education using the media does not solve the problem. You can, of course, to campaign for the population to buy mushrooms in stores only. However, among the cases is dominated by low-income persons, and their tradition of use of "free" wild mushrooms can be changed only under the condition improving social welfare. If that can reduce the number of cases - because it is streamlining the implementation and application of pesticides.