Home>Nerve disease (Neurology)>Epilepsy: What you need to know about this illness?

Epilepsy: What you need to know about this illness?

Epilepsy - one of the most common neuropsychiatric disorders. What you should know about the disease and first aid for seizures by the patient and their relatives?

The seizures of epilepsy are of different types, but the basis of any of them is abnormal and very high electrical activity of nerve cells in the brain, as a result of which the discharge occurs.

In this case there are three possible outcomes:

Seizures that occur in the first two cases,called partial (partial), in the latter case, however, speak of generalized seizures. In generalized seizures consciousness is always disturbed, whereas partial it is sometimes lost and sometimes persists. To denote seizures in epilepsy also often use the terms "convulsions", "attacks", "episodes".

Epilepsy has been known since ancient times. Epileptic seizures were observed in many prominent people, such as the apostle Paul and the Buddha, Julius Caesar and Napoleon, Handel and Dante, Van Gogh and Nobel.

How common is epilepsy?

The true number of people with epilepsy to installdifficult, as many patients are unaware of their disease or hide it. In the United States, according to recent research, epilepsy affects at least 4 million. People, and its prevalence is 15-20 cases per 1,000 people.

In addition, approximately 50 out of 1,000 children at least once observed a seizure as the temperature rises. In other countries these rates are probably about the same as

as the incidence is independent of gender, race,socio-economic status or place of residence. Radical method of treatment of epilepsy does not exist, but now with the help of drugs can bring an end to attacks in 60-80% of cases. The disease is rarely fatal, a gross violation of the physical or mental state of the patient's abilities.

Although seizures can be observed in manydisorders and may thus be associated with them, the true cause of epilepsy known. Studies show that this disease occurs when certain brain area damaged but not completely destroyed. It is affected, but preserved the viability of cells serve as a source of unnecessary electrical discharges, and hence the seizures. Sometimes, during a seizure, a new damage to the brain, near or far from the former. Since forming additional epileptic foci.

It is still unknown why the samedisease from one patient is accompanied by seizures, and another - no. Even more puzzling is the fact that some people who have had a seizure, it is not repeated in the future, and in others there are repeated frequent seizures. The importance is likely to have a genetic predisposition, but the mode of inheritance is not clearly established. Apparently, the combination of epilepsy causes of hereditary factors and environmental influences, including illness.

Epilepsy is classified according to its origin andseizure type. By origin distinguish two main types: idiopathic epilepsy, in which the cause can not be identified, and symptomatic epilepsy associated with a specific organic brain damage. Approximately 50-75% of cases of idiopathic epilepsy.

For the diagnosis is very important electroencephalogram(EEG), which allows to identify the painful electrical activity of the brain, as well as to determine the localization of focus of this activity (epileptic focus) and the extent of its spread. However, not all patients with epilepsy EEG is changed, so that the normal it does not rule out the disease.

It is important to accurately set the type of seizure, because ofthis depends on the treatment. Some patients have different types of seizures, which requires drug combination. Everyone who had endured a seizure should always consult a doctor.

Large (generalized) seizures. This type of seizure is traditionally denotedFrench term grand mal (that translates to big fit). It is characterized by severe cramps. Seizures are usually preceded by a prodromal period (the period of the precursors), extending from a few hours to several days. At this time there are irritability, anxiety, loss of appetite or behavior changes.

Immediately before a seizure in somepatients have an aura - a state-precursor, the manifestations of which vary in different patients from repeated every time nausea or muscle twitching sensations to the inexpressible delight. At the beginning of seizure a person may make cries or other sounds. He loses consciousness, falls to the floor, his body tense, breathing slows down, the face is gray, bluish or pale.

Then there are twitching in the arms, legs, orthroughout the body. Pupils dilate, blood pressure rises, the face engorged with blood, the skin covered with sweat, his mouth salivate. Often there is an involuntary leakage of urine and feces. Chance to bite his tongue or cheeks. Then the muscles relax, breathing becomes deeper, cramps subside. Consciousness returns through slumber. Drowsiness and confusion sometimes persist for days. Generalized seizures can manifest themselves in different ways: sometimes there is only one of the above phases, sometimes changing their sequence.

Memories of generalized seizuresno, sometimes the patient remembers only the aura. Headache, confusion, body aches and other symptoms may be associated with a fall during a seizure, a strong muscular 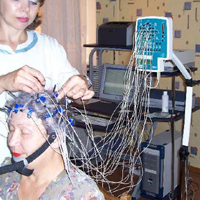 spasm or injuries due to involuntary movements. The seizures typically last from a few seconds to several minutes and tested by itself.

Febrile convulsions species usually representgeneralized seizures and occur in children at high temperatures, usually between the ages of 6 months to 4 years. Many of these children have relatives who suffered in childhood such as seizures. Since in most cases there are 1-2 such episodes, which subsequently did not develop in true epilepsy, some experts do not include febrile seizures in epilepsy.

The focal (partial) seizures. They involved only one kind of part of the body;seizures can be motor (motor) or sensitive (sensory) and manifested convulsions, paralysis or other painful sensations. The term "Jacksonian epilepsy" refers to seizures that have a tendency to move ( "parade") from one body part to another; sometimes such an attack were generalized and spreads to the whole body. After limb spasms in it until the day can be stored weakness (paresis). The appearance of the aura, loss of consciousness and lethargy after a seizure is not always observed.

With this type of seizures are common, especially in adults, detect organic brain damage, so patients should be as soon as possible to seek medical help.

psychomotor seizures characterized by a combination of mental andmovement disorders. Typical start - prodrome and aura with the occurrence of an unusual taste, smell, or a feeling of déjà vu (deja vu - like something out of an event seen before), after which the patient loses touch with reality.

During a seizure often seen chewing,laugh or smile, licking the lips, the patient can kick, to touch hands clothes. Movement is usually coordinated, but repetitive and stereotyped; the patient does not perceive others. In many cases, seizures occur only long periods of fear, a sense of unreality, hallucinations, dreamlike state. Memories of the attack are often absent. Psychomotor seizures are most commonly associated with epileptic focus in the temporal lobe of the brain.

Absence lasts from 5 to 25 seconds. Immediately after the seizure the child is returned to the interrupted activity as if nothing had happened. Often such attacks go undetected until due to repeated attacks will not occur lethargy or confusion. As a rule, this kind of epilepsy respond well to antiepileptic drug treatment. Absence seizures usually stop for 20 years.

Small motor seizures. There are three types of such seizures. akinetic seizuresOr drop attacks (from the English drop -. Fall) are characterized by a sudden drop or head down (as if a person suddenly "switched off" or it suddenly lurched forward). Myoclonic seizures accompanied by short jerks, as happens in healthy people when falling asleep or waking up. infantile spasms (Infant myoclonus, or seizures salaamovy) characterized by lightning attacks that occur in early childhood, usually up to one and a half years.

As a rule, small motor seizures continuea few seconds, sometimes followed by groups, one after another, often replaced by tears. Small motor seizures are difficult to treat and is often associated with residual (residual) or progressive brain damage.

status epilepticus - A condition in which an attack continueshours without a break or attacks follow each other, and in between consciousness is not fully restored. Although the status may be associated with any type of attacks, the threat to life arises only in generalized convulsions and respiratory disorders.

Mortality during status epilepticus reaches5-15%. If he is delayed by more than 50% of cases there is a secondary brain damage that can lead to dementia. In view of this threat, a patient with prolonged seizures requires emergency medical care.

Specialized nutrition - assistance in restoring after ...