Syringomyelia - a chronic disease and live with itnot easy. Therefore, humanity will not cease to search for solutions, how to cure this disease. And the results are already there. A huge step in this direction is surgery - cut the thread end of the spinal cord.

"Scoliosis, syringomyelia and Chiari anomaly ArnoldYou can stop. " So says a professor of medicine and surgery, the neurosurgeon, neurologist, director of the Barcelona Institute of Neurological Miguel B. Royo Salvador. And shares his experiences in dealing with syringomyelia by conducting operations filum terminale of the spinal cord.

Causes of syringomyelia: conjectures and facts 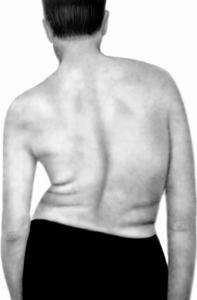 - Spinal cord - an organ of the nervous system, heIt extends within the spinal column of the cranial opening in communication with the spinal column, to the first lumbar vertebra. On its entire length - from the base of the skull to the coccyx, which ends with the spine - from it branched sensory and motor nerves. Structure of the spinal cord at the same as that of the head, - a central portion having a shape of a butterfly, gray matter consists of nerve cells with a predominance of shell and white matter predominant to nerve fibers. The disease, in which the spinal cord is formed cavity, like a cyst, affects mainly gray matter called syringomyelia, because the opening in the central spinal canal spinal cord attaches flute form (in Greek "Syrinx"). In most cases, the origin of this disease is unknown.

- What are the symptoms of this disease?

- In patients with changes in sensitivityany part of the body, most often in the hands, and the patients feel touch, but do not feel the temperature of objects, so without pain may receive severe burns. You lose muscle mass, and with it, and physical strength. Changes gait. The disease can lead to disability.

- What are the reasons can cause this disease?

- Sometimes the causes of syringomyelia can be set,for example, in the case of trauma, tumor, infection, fusion of the spinal cord in the lumbar spine with congenital diseases such as «spina bifida» (split spine), meningocele or myelomeningocele. But in most other cases except the above, to determine the cause of syringomyelia is not possible.

- What is the novelty of the approach to the treatment of syringomyelia, Barcelona proposed Neurological Institute?

- The so-called idiopathic syringomyelia,syringomyelia, or of unknown origin, from the point of view of some authors connected with the violation of the outflow of cerebrospinal fluid, or the presence of a small posterior fossa. Violations outflows do exist, but they are not so large as to cause such a serious injury. In addition, the study of that part of the skull, which signed the cerebellum, showed no difference in size in patients with Syringomyelia and normal.

There are quite a convincing caseI favor the theory that leads to the death of syringomyelia the central channel of the spinal cord cells associated with circulatory disturbance caused by the stretching of the spinal cord. The tension is transmitted through a terminal thread and its attachment place - coccygeal ligament. And end thread and tail ligament in the adult have no function.

In the animal experiments proved that evenwith mild spinal cord pulling his neurons cease to function as normal blood flow is disrupted. In humans, this tension, if severe enough, can reduce blood flow to the central canal of the spinal cord; in this area are important arteries supplying the spinal cord, and are located afferent artery, particularly in the cervical region, where it can obstruct the outflow. Violation of the blood supply results in necrosis of the spinal tissue dies, trapped interstitial fluid and forms a cyst in the central canal of the spinal cord. Actually it's called syringomyelia. The disease has been described 500 years ago, but the reasons for it is still not known.


Surgical treatment of syringomyelia: with benefit and without consequences

- How important is this discovery for patients with syringomyelia?

- Now it is possible to delay the progression of the disease a simplesurgery - dissection of one of the two ligaments, creating tension in the spinal cord. Thereafter, spinal cord blood flow is improved.

- Dissection of the thread end of the spinal cord of the patient eliminates all symptoms of the disease?

- Most of the symptoms associated with syringomyeliairreversible damage to the nervous tissue, and it can not be replaced. Although it is possible to use instead of the victims replacing their nerve plexus, and some cells and tangles, even if it do not work, but did not die, and after the improvement of blood flow can restore its function, bringing some relief to the patient, though the sooner the tension of the spinal cord will be eliminated, the better the prognosis.

- What is the operation filum terminale?

- When surgery through a smallhole in the sacral bone in the lower back, where there is no likelihood of break the mechanics of the spine viewed the thread end of the spinal cord and dissected by microsurgery. The whole operation takes about half an hour, and the patient's hospitalization is limited to one day.

- Are there any unintended consequences dissecting this ligament?

- Are there any other effects of spinal cord tension?

- End yarn tension not only triggerssyringomyelia, but also gives rise to the spine flexion reflex, leading to scoliosis. To prevent spinal stress, it causes the lower part of the brain, the so-called cerebellar tonsils, drop down the foramen magnum, through which the skull is communicated with the spine. This is called Arnold Chiari malformation - a disease described 100 years ago, the cause of which is still unknown.

- What happens to the cyst with syringomyelia?

- At the end of syringomyelia cut threadspinal cord stops the disease. A cyst formed as a result of cell death, may remain unchanged, but may disappear in the spontaneous opening of the space surrounding the spinal cord, or a shift in its central channel, where there ependymal canal, through which the central canal of the spinal cord communicates with the cavities of the brain . Symptoms of the disease are caused by cell death and toxicity tumor effect of the cyst. Dissection of the spinal cord yarn end has two beneficial effects: delays cell death, which causes tension cord, and reduces the toxic effect tumor cyst on the spinal cord.

- This method is already used in the treatment of patients with syringomyelia?

- They were operated on patients with scoliosis,anomaly of Arnold Chiari and Syringomyelia, in some cases, all three combined diagnosis. state improvement was observed after surgery, very significant in some cases.

- A man of 25 years with syringomyelia. The loss of temperature sensitivity in the left half of the body, most siringomieloidnaya cyst in the cervical region of the spinal cord of the central channel. Six hours after incision terminal strands of the spinal cord leading physician gave the patient a complete restoration of sensitivity, improving the state continues to this day, the effects last for 11 years. The patient operates a warehouse in Galicia. Other doctors, to whom he was referring, at the sight of such a large lesions predicted his total disability in two years after staging syringomyelia diagnosis.

Or another case: male 32 years, suffered all three diseases. Among other symptoms, complaints about tremors in the hands, do not let him write. Significant improvement was immediately in the postoperative period, and one month after surgery filum terminale of the spinal cord tremors and other symptoms almost disappeared.