Such a useful royal jelly

The unique properties of honey and other productsability to live bees are used by people since the time of Hippocrates. Apilak (jelly) - a product produced by bees, which is rich in biologically active substances, protein, vitamins, trace elements and amino acids. It has many beneficial properties and has a beneficial effect on the body.

Such a useful royal jelly

Bright taste and aroma of flowering herbs, saturatedGolden hue and delicate texture. If all the medicines were so tasty and attractive! Nectar and ragweed have nothing to do with it: it is only a result of the work of hard-working insects.

Imagine for a moment that from time immemorial in peoplethere was a simple means to maintain good health, preserve the youthfulness of the body and increase life expectancy. Can you believe that now we have in our hands a powerful tool to combat fatigue, illness and depression?

Unique properties of honey and other productsbees have been used by people since the time of Hippocrates and Avicenna. Honey is an ancient remedy for restoring strength, treating many diseases and prolonging an active life. Medieval healers also used wax, propolis and bee venom, but royal jelly (apilak) was used as a medicine only at the beginning of the 20th century.

Apilak is a secret, producedallotroficheskimi glands of worker bees. It is intended for the feeding of the larvae of the future queen bees, and then for their food during the egg-laying. Queen Bee - "elite" type of bee, they live ten times longer than ordinary bees, whose diet consists only of honey. 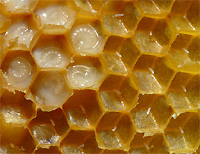 The composition of royal jelly is so saturatedbiological active substances, protein, vitamins, trace elements and amino acids (some of the elements of apilak are still a mystery for biochemists) that it can be compared, perhaps, only with female colostrum - a unique product specially designed for a newborn and accessible only to the first 3-4 day of life. In fact, apilak is “bee colostrum”, the first food of larvae that gives them strength for growth and development. It differs from honey in the same way as colostrum from milk. Proteins make up about 13% of royal jelly, mainly gamma globulins and albumin, as well as 23 amino acids, of which 10 are irreplaceable (those that the human body can only get from the outside, but cannot work out on its own). One of the proteins of royal jelly, royalizin, has bactericidal activity similar to breast milk lactoferrin. Carbohydrates of royal jelly, glucose and fructose are also found in honey, they make it easily digestible and tasty.

Vitamins A, C, D, E, K, B vitamins, macro-and trace elements K, Na, Ca, Mg, Fe, P, Zn - the list goes almost to the end of the periodic table, and all that - the components of royal jelly. It is important that, as in human milk, in apilak have special enzymes that promote its absorption.

Natural royal jelly can be stored howanything for a long time: it is sterile, does not deteriorate and does not grow moldy, it has activity against germs and bacteria. It can be called a natural antibiotic, largely able to replace the aggressive synthetic drugs.

What is royal jelly, a specific "bee" a product can help a person?

The first studies of 1954 confirmed thatthat practice has shown since ancient times: apilak is an excellent tonic and adaptogenic agent. Apilak improves metabolism, the work of many glands, including the genital, stimulates and supports excellent digestion and blood formation. Apilac can also be used for underweight, lack of appetite.

Improving the general condition of the body, uterineMilk helps protect against colds and viral diseases in the cold season. Antiviral and antibacterial components of royal jelly slow down the growth of typical pathogens of seasonal diseases: staphylococci, streptococci, colds and flu viruses.

Complete range of B vitamins as part apilakadirectly stimulates the own human immunity and anti-inflammatory properties of royal jelly are especially important for residents of the northern regions, because winter acute tonsillitis, sinusitis, tracheitis, bronchitis, and other "favorite" north of diseases we know firsthand. To treat such conditions completely natural, safe and affordable drug easier and more efficient than to follow complicated and expensive treatment regimen combining chemical medicines and physiotherapy.

Separately need to say about the action on apilakathe female body when there is insufficient milk production (hypogalactia). Unfortunately, there is often found a lack of milk in nursing mothers. Hypogalactia reasons may be different - from mothers chronic diseases to the wrong organization of feeding. Apilak, due to the content of hormone-like substances, stimulates the mammary glands, and its vasodilator improves the flow of breast milk. The most valuable molecules apilaka carried through the blood of woman in her breast milk vitamins and minerals. Most mothers taking apilak, marks a more active flow of milk within a few days after starting the drug.

The Grindeks company that created the Apilak drugGrindeks ”, made sure that the reception of a useful product was as comfortable as possible and did not cause the slightest inconvenience. Apilak Grindeks is available in the form of sublingual tablets, which must be kept in the mouth until completely dissolved.

Adults take 1 tablet 3 times a day. For a full course of admission, as a rule, 2 packs of Apilak Grindeks are required. When taking the drug, pay attention to two points: rarely, but still there are allergic reactions to beekeeping products (nursing mothers must be especially careful); A high dose of Apilac can “tint” the body and cause a slight sleep disturbance. In the first case, the drug should be discontinued, in the second - reduce the dosage, in consultation with the doctor.

Terzhinan during pregnancy, or how to safely handle ...