The nervous system and the leech

The books is a long girudoterapiithe list of diseases in which the use hirudotherapy recommended. At first glance, it may seem hard to believe - so wide range of different ailments, the treatment of which can help to leech. However, the first system that rapidly eagiruet to "piyavkin Kiss" is the human nervous system. Read about how to awaken the body leech 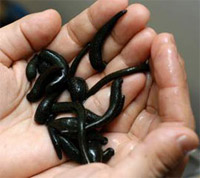 Based on numerous studies andClinical observations it can be concluded that the effect on the nervous system responds leeches before all. Any effect on the skin of the body, richly equipped receptor formations, primarily addressed the most excitable structures of the body - receptors that transmit information to the central nervous system, the cerebral cortex.
The mechanism of action of hirudotherapy on the bodyman consists of three main components, mediated through the nervous system, interconnected and mutually influencing each other: local, segmental and general reactions.

Local or regional, reactionAt which detect local changes inthe impact zone. Local irritation is the source of a long and intense impulses to the nerve centers and occur as a result of this reflection (total and segmental) reactions.

Segmental reaction corresponds to a separate metamerism, whichimpacted or that annoyance. Irritation effect on some internal organ. The reflex arc passes from the periphery through the vegetative cells of the sympathetic vertebral nodes and spinal cord to the internal organs.

Generalized (general) reaction individual systems: cardiovascular, digestive, etc. and metabolism. Initially external influence acts as a signal carrying some information. After his analysis of the nervous system, an information signal is converted into a control, ie. E. In addition to the direct action of enzymes leeches on the body, there is the inclusion of self-regulation organs and systems. There is a reorganization, not only at the site where the leech, but all over the body was placed. Therefore, it is clear that girudoterapiya effective in many diseases.

Thus, modern researchproved that the leech should not be viewed as merely a local method for mechanically removing blood, but as a single living, a very complex and unique nonspecific irritant in relation to the human body as a whole, capable of reducing violations not only in the system of internal environment (homeostasis), but also interacting with them in other body systems.