What is cryotherapy? What types of cryotherapy exist? Answers to the questions you will find in the article.

Cryotherapy is a treatment with an artificial cold, causing the stressful state of the body,
Actively affects the regulation of metabolism, the formation of the necessary hormones,
improving blood circulation, and all processes in the human body, which makes it possible
Long stay healthy, young, beautiful.

More than our distant ancestors laid the beginning of cryotherapy, they took icy baths
For rejuvenation. The modern methods of cryotherapy imply an impact of inert
gas nitrogen or air cooled to ultra-low temperature - 150-190ºWITH. Cryotherapy
divided into common and local. 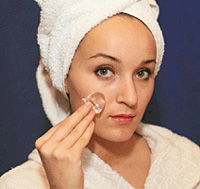 General cryotherapy is carried out in a special crique camera, where the skin is subjected for 2-3 minutes
Temperature stress without damaging. General cryotherapy provides full
or partial immersion of the naked body into the gas medium at 110 -
160 S. Limbs and respiratory organs protect against frostbite - clothes woolen
Socks and mittens and cotton-gauze mask. General cryotherapy has a healing
and rejuvenating influence on the whole body as a whole.

Such an effect is based on changing the activities of vessels - initial spasm
Small artery is replaced by their expansion expansion, which leads to active hyperemia,
The duration of which is from 1 to 3 hours. Result - reinforced heat generation
and improving the nutrition of tissues of the skin and internal organs, stimulating the work of the heart
and vessels, relief of venous outflow. All this very helps rehabilitation after
injuries of the musculoskeletal system and operational interventions, for diseases
spine, inflammatory and exchange diseases of the joints, with many skin
Diseases.

Thanks to the enhanced heat exchange, general cryotherapy contributes to weight loss.
Common procedures
Cryotherapy is not accompanied by side effects. But contraindicated with such difficult states as myocardial infarction and brain strokes, high
The degree of hypertension and heart failure, and some others.
And, of course, with individual intolerance of the cold.

Cryotherapy used in cosmetology purposes is based on the use of liquid nitrogen.
Liquid nitrogen is a transparent liquid, without color and odor providing
Strong therapeutic effect on fabric. Depending on the technique, in some
cases freezing causes fabric death, in other only narrowing of blood
vessels with the subsequent expansion of capillaries, which significantly enhances the influx
blood to the place of exposure, resulting in improving the nutrition of tissues. Masks,
wraps, injections, conducted after cryotherapy sessions, have reinforced
Impact that significantly helps in the treatment of overweight and cellulite.

Cryotherapy with liquid nitrogen Already several decades are used to remove warts,
Moles, papilloma, senile keratosis, hypertrophic scars and acne.
It is in this case that the fabric death is achieved by deep freezing the removed
New formation - a long exposition of liquid nitrogen is carried out, more than 30 seconds,
under low pressure. After 40-60 seconds after freezing, hyperemia appears
and swelling, and, a few hours later, the epidermal bubble is formed, or immediately
dense crust, which is twisted in a few days, leaving a minority
Pink spot. If you need a more superficial effect on the skin, liquid
Nitrogen is applied briefly, 10-15 seconds, in the form of cryoissage. Cosmetic
The cryoissage is carried out with a cotton swab on a wooden stick, which dips
in thermos with liquid nitrogen, and rolled through massage lines or locally to problematic
region. Even cryoissage of the skin of the scalp for the treatment of some
Forms of baldness. Comb hair and parallel with combined swab tests
Rotary movements are performed with liquid nitrogen.

More efficiently, the modern use of a cryogenic gas jet directed
With the help of a special device for separate parts of the body. Such a cryoappliktor
It is a tube tank for liquid nitrogen with replaceable metal
Tips of various configurations.

Kriomassazha The most actively applied in the face and body skin rejuvenation programs. New word
In the local application of cold - cryopyringe and cryooelectrophoresis. The essence of the latter
Procedures - running in deep layers of skin of frozen preparations selected
Depending on the nature of the skin, by means of a pulsating current. Effect
Cosmetic cryoissage and other cold procedures is to reduce wrinkles,
Prevention of leather declarations, reducing shape and elasticity of the chest, and getting rid
from fat deposits.

Cryosaine - New trend in the field of cosmetology used for treatment or hardening.
In special devices, the patient is enveloped by low-temperature gas. This procedure
helps to cope with stress, cellulite, and many other diseases. Region
Applications: the body as a whole, excluding his head and neck.

Putting woolen mittens and socks, the patient comes into a crocabine that serves
Dry cold mixture of nitrogen and air to the level of shoulders. After 15 seconds inside the cab
Set temperature - 130c-140c.

Contraindications to use are: