Acupuncture, the treatment method used in China since ancient times. What is the secret of this zhrevnego treatment that helps people so far? The answer you will find in this article.

The pace of modern life makes us constantlylook for ways to maintain good physical fitness and mental balance. Today, the arsenal of traditional medicine are hundreds of different methods of healing and rejuvenation. One of the leading positions among them is acupuncture (from the Latin acus -. Needle, punctio - prick), or acupuncture.

For sure the history of this techniqueunknown. Many consider the birthplace of the ancient acupuncture China. However, there are documents showing that the secrets were known to acupuncture and other civilizations of the ancient world. For example, in one of London's museums you can see Egyptian papyrus dating from the year 1550 BC. e., wherein the acupuncture technique is described in detail and are indicated for the treatment of all the points on the human body. It is possible that acupuncture originated in Nepal, India and Tibet, where ancient medicine reached a high development.

The first information about acupuncture came to Europe inXIII century. thanks to the merchants and travelers, the inhabitants of the continent are familiar with the exotic East. Initially, acupuncture has not caused interest and forgot about it until 1671, when the book was published, dedicated to this amazing procedure. Much attention in Europe as well as in Russia acupuncture was only paid in the XIX century. Then 142 scientific papers on the subject have been published.

Today, acupuncture is very popular andIt is used to treat acute and chronic pain, as well as different types of addiction, such as alcohol or nicotine (in Asian countries in almost every medical institution have acupuncture office). In Russia, despite the fact that in Soviet times, the study of acupuncture engaged many prominent scientists, mass treatment and did not.

The basic principles of acupuncture

So, what exactly is acupuncture and what are itsbasic principles? The method is based on the philosophical doctrine of the vital energy, or qi energy, according to which it circulates in the human body through certain channels, or meridians. Chi energy is responsible for our vitality. Acupuncture Masters say that we are all born with a certain reserve of energy, which spend or unconsciously lose in a lifetime. Compensate for supply of vital energy is impossible. When the qi circulates freely throughout the body through the meridians, the body is healthy. But if its flow is blocked, stagnant or weakening, the person begins to experience physical, mental or emotional distress. The main reason for violation of the circulation of energy - excessive emotional load (anger, excitement, grief, fear). The imbalance can cause and climatic conditions: cold, humidity, dryness, heat. We also lose qi when conducting a wrong way of life, full of frills, or perform heavy lifting, causing fatigue. In addition to the chi energy of our vital functions control the two opposite but complementary energies - yin and yang.

The action of acupuncture aims to reduce the loss of chi energy, slowing its spending, as well as to achieve a balance of yin and yang.

Acupuncture is based on the stimulation of self-healingforces of the human body through the use of the finest needles or pressure on certain points of the body. They are located in all people at the same plots with a slight difference depending on the age and growth. Experts divide the points into three groups: vascular and nerve, skin and nerve and muscle-tendon-nerve. Nowadays, in order to find points and determining the intensity of exposure to the use of special devices based on the measurement of a minimum electrical resistance of the skin at the site of the point location.

Ancient physicians were able to identify thatthe body reacts differently to stimulation of different points. The data were systematized, and eventually each of the points got its name and description of the location on the body. Later it was found that the impact on the different points can have the same effect on the same body, then the "point the same direction," began to be grouped according to certain lines, which received the name of the channel. Knowing the location of these channels and their properties determine the success of healing.

All channels in the body compriserather complex energy system. It is closely connected with the basic anatomical and physiological systems: the nervous, endocrine, cardiovascular, respiratory, gastrointestinal, urinary, immune and other. The main task of the energy system - ensuring a stable internal relationship of all organs and tissues, as well as the body connection with the cosmos. This system consists of 14 main meridians (seven yang and yin-seven), which is highly informative about 700 biologically active points. There are meridians of the heart, lungs, liver, gallbladder, kidney, bladder, stomach, spleen and pancreas, colon and small intestine, as well as a large number of vnemeridiannyh points.

Acupuncture points - it places on the human body,where qi through the channels rises close to the surface of the skin. As already mentioned, the energy must circulate freely through the meridians. In order to restore the energy balance of the body, acupuncture specialist stimulates acupressure points. However, they do not necessarily have to be directly related to the unbalanced channel. Using acupuncture technique, the master can quite effectively control the energy balance of the system, restoring health and preventing disease. For stimulation of points acupuncturist uses needles made from alloys of silver and gold, or stainless steel. 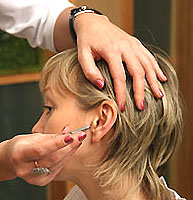 Stimulation of biologically active points in differentcombinations allows you to start or change the direction of various physiological processes. Thus, for example, acting on one point, it is possible to lower the blood cholesterol level and affecting other - to increase immunological activity corresponding to blood cells.

Age restrictions for the use of acupunctureno. The patient can become a baby, although most acupuncturists to treat the elderly. Restoring power to the channels of the body, the doctor removes a person directly from many diseases. List indications for acupuncture is so vast that it is easier to list the contraindications. However, on the illnesses with which it makes sense to consult a specialist, not to mention.

Acupuncture is contraindicated in severephysical and emotional exhaustion, starvation or very fed state, individual intolerance of acupuncture (in this case, shown warming hotspots), after a heavy blood loss or dehydration, while the influence of alcohol.

For relative contraindications include: infectious diseases of unknown etiology, cardio-vascular diseases in the stage of decompensation, pregnancy, cancer. By the way, the last in China are treated by acupuncture quite successfully.

The duration of treatment with acupunctureIt depends on the extent of the meridians. Oriental medicine cures not the disease but the patient, the therapy is determined individually. Pain also be removed individually. It should be noted that the pain - a kind of signal a failure in a particular organ. It mobilizes the body to fight the disease, and if it does not remove the artificially held only after removing the cause, which caused her.

Acupuncture, being itself a uniquetreatment, permits and sometimes even requires the simultaneous use of other additional therapies. In particular this applies to manual therapy, and the entire process should be "in the hands" of one specialist. A useful help prove homeopathy, herbal medicine and physical therapy, and sometimes special baths and compresses.

Acupuncture - the science and art at the same time. It plays a role not only the right choice of points, but also craftsmanship. It is believed that if the point selected is true, but the needle injection equipment is at an insufficient level, and the treatment effect is not so significant. Therefore, deciding on a course of acupuncture, acupuncturist, choose carefully. And good luck!