Many people who have never even held in his hands a tennis racket, begin to protest against such a diagnosis: "Because I'm not a tennis player," - they say.
What causes tennis elbow? Read this article.

Lateral epicondylitis, the disease knownalso called tennis elbow, not necessarily common in people involved in tennis. Indeed, the power hit the top in tennis can lead to strain on the muscles and tendons of the elbow region, which is the main cause of epicondylitis. However, other activities (such as painting or sawing wood), which are accompanied by repetitive movements of the elbow, may contribute to the development of epicondylitis.

The source of pain in epicondylitis is localized ina small hill, located near the elbow. It is called the lateral epicondyle. The forearm muscles involved in the extension brush, attached to the lateral epicondyle in using the tendons. Tendons consist of collagen fibers - thin elastic strands arranged parallel to each other. One end of the tendon attached to the muscle, and the other is woven into the periosteum - a shell that covers the bone. With the reduction of muscle this force is transmitted to the tendon, and through him to the bone.

Overvoltage muscles and tendons in the elbow area is the main cause of epicondylitis. 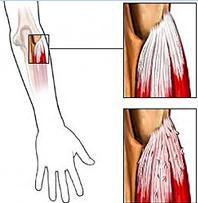 Repetitive forceful movements of the elbowcan contribute to hyperinflation ulnar tendon area. It need not be prohibitive burden in professional tennis. Nailing, carrying buckets of water in the country, trimming bushes - all this can lead to tennis elbow.

It should be noted that tennis elbow is notalways accompanied by tissue inflammation. In the absence of inflammatory changes in the tendon condition called tendinosis. With tendinosis mikronadryvy tension and lead to degenerative changes in the tendon. This arrangement is disrupted tendon collagen fibers. tendon cells begin to be replaced by fibroblasts - cells that produce a slightly different type of collagen is not as durable and no orderly arrangement of fibers. Gradually, there is degeneration of the tendon: it becomes thicker due to inadequate growth of connective tissue. Naturally this tendon can be damaged even with minor injuries.

The exact mechanism of development still epicondylitisIt is not known. According to one common hypothesis, the tendon is attached to the lateral epicondyle, as a result of overload appear mikronadryvy. Restore tendon integrity prevent continuing load, which can also lead to the formation of new lesions. The growth of the connective tissue at the site of damage leads to weakening of the tendon and the emergence of pain.