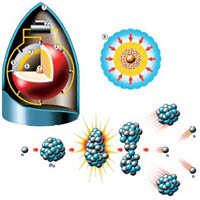 Acute radiation sickness issingle-stage injury of all organs and body systems, but above all - the acute damage genetic structures of dividing cells, mostly blood-forming cells of the bone marrow, the lymphatic system, epithelium of the gastrointestinal tract and skin, liver cells, lung and other organs. Damaging action has ionizing radiation.

As trauma, radiation damage to biologicalstructures is strictly quantitative, ie, small effects may be unnoticeable, large can cause fatal injury. It plays an important role and the dose rate of radiation exposure: the same amount of radiation energy absorbed by the cell, causes damage to the biological structures larger than the shorter exposure period. Large doses of exposure, stretched in time, cause significantly less damage than the same dose, absorbed in a short time.

The main characteristics of radiation damageThey are biological and clinical benefit, which is determined by the irradiation dose ( "dose - effect"), on the one hand, and on the other, and this effect is due to the dose power ( "power dose - effect").

Immediately after human exposuresymptomatology of lesions is poor, sometimes there are no symptoms at all. That is why the knowledge of the human dose of radiation plays a decisive role in the early diagnosis and prognosis of the acute radiation sickness in determining treatment strategies to the development of the main symptoms of the disease.

The degree of manifestation of radiation sickness

Upon irradiation at a dose of less than 1 Gray talk aboutacute radiation injury, disease-free, although small changes in the blood in the form of transient moderate decline in the number of white blood cells and platelets in about six weeks after exposure. In itself, the separation of patients by severity rather conditional and pursues specific goals of the triage and in relation to their specific organizational - therapeutic interventions.

The system determining radiation dose usingbiological (clinical and laboratory) parameters in affected when exposed to ionizing radiation received the name of biological dosimetry. In this case we are not talking about the true dosimetry is not about counting the number of absorbed radiation energy tissues, and on compliance of certain biological changes indicative dose of short-term, simultaneous whole-body irradiation. With the help of this method is determined by the severity of the disease.

When irradiated without developing signs of illness(Radiation dose to 1 gray) or acute radiation sickness, mild (1-2 Grey) patients special treatment do not need, they need only outpatient. Patients can be left (to the exclusion of additional exposure) on the ground or fixed to a local medical facility closest to the area of ​​the accident (live).

In acute radiation sickness moderateseverity (1-2 gray) the victim must be treated in hospital, before the beginning of specialized treatment ensures the survival and development of minimal consequence.

Acute radiation syndrome-severe (4-6 Grey) is characterized by the probability of survival of patients with timely begun treatment.

In acute radiation sickness is very severe(More than 6 Gy) survival in the treatment possible in isolated cases. The tactics in relation to this group of patients with different mass destruction and small incidents.

Separation of acute radiation sickness in the degree ofseverity, based on radiation doses, and not on the nature and severity of painful symptoms themselves, allow, first of all, get rid of hospitalization of people with at least 1 dose of defeat Gray. Only persons with a lesion severe when the irradiation dose exceeds 4 Gray, requires immediate hospitalization in a specialized hematology hospital, since the victims in the coming days or weeks of exposure fasting lead to abnormalities in the blood system, a profound decrease in the number of platelets, develops bowel disease (enteropathy) , stomatitis, radiation skin lesions and internal organs. The defeat of the blood develops in acute radiation sickness of moderate severity, so these victims also need to be hospitalized, but of mass destruction in exceptional cases, it may be delayed for 2 weeks.