Basal cell skin cancer, also known as basal cell carcinoma -the most common variant of cancer among all malignant skin tumors. Basal cell carcinoma characterized by slow growth and metastasis is very rare, however, despite its "harmless", it can destroy the tissues and organs, turning them into "continuous sore spot."

Basal cell skin cancer, also known as carcinoma orbasal cell carcinoma, detected in 90% of cases the diagnosis of cancer of the skin. The tumor is characterized by slow growth and the almost complete absence of metastasis, ie it does not apply on the human body. However, despite the seeming harmlessness, it is able to grow deep into the tissues, causing their destruction and the emergence of a very painful symptoms.

Who suffers most basal cell carcinoma? 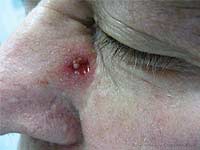 Basal cell skin cancer is often equallycommon in men and women with a tumor no gender preference, but her passion for blue-eyed and fair-skinned people is obvious. The primary cause of basal cell carcinoma is considered to be damage to the skin from exposure to ultraviolet light, so people with a pale, thin skin are most susceptible to the disease. A special role instances decrease immunity, are trigger in the development of cancer, including skin cancer.

According to research scientists ultravioletradiation is the main cause of skin cancer. Basal cell carcinoma is most often suffer from sun lovers, ready to soak all day on the beach under the warm rays of the sun, as well as frequent visitors to tanning salons, prefer beauty of the body's own health. Others, too, are not immune to cancer, is that those who are accustomed from childhood to conceal their bodies from head to toe tight clothing, protecting against malware penetrating sunlight.

On the occurrence of the disease has a significantthe impact of human living in conditions of high insolation. Thus, the incidence of basal cell carcinoma in the US southern states disproportionately higher than in the northern regions. The high incidence among residents of Australia, South Africa - there are registered the most cases of skin cancer.

Basal cell carcinoma - a tumor that most often affectspeople over the age of 45-50 years. But this does not mean that children and young people can be irresponsible for their own health, ignoring the use of sunscreens. It was found that this kind of "born" of cancer at a young age, in middle age, he also has an effect appearances.

What is basal cell skin cancer? 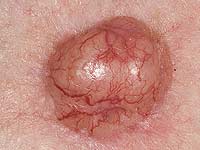 Tumor often appears in the openparts of the body - the face or neck. Only 20% of doctors are education on the trunk and extremities. For basal cell carcinoma is characterized by the growth of two options: a superficial and invasive, that is internal.

Development begins with superficial basal cell carcinomaappeared on the skin of a small size of a match head, thick hump, did not differ in color from the surrounding tissue, in this case there are no itching, pain or other unpleasant sensations.

Nodule grows slowly, a few months later,and perhaps even years, reaching 1 cm in diameter. At its center begins the process of decay, there is a bloody crust, under which found a bleeding ulcer or erosion. If tumor growth processes prevail over decay processes, it achieves a rather large size, has a flat, scaly surface and penetrates into the fabric.

Basal cell carcinoma with internal growth recalls the plague,subject to destructive skin, muscles and other tissues down to the bone, but, despite this, the tumor does not metastasize, prompting many scientists to abandon the treatment of basal cell carcinoma like skin cancer.

Accurate diagnosis of the disease requires a biopsytissues and their subsequent histological and cytological studies. Sometimes a doctor first removes the tumor and then sends it to the study, but more analysis is taken at the beginning or scraping a small piece of tissue.

How to treat basal?

Treatment of basal cell carcinoma is completely removedor destruction of the tumor. To postoperative left cosmetic defects, doctors carefully choose methods of influence, taking into account the localization of education, the nature of its growth. Taken into account and the age of the patient, and the presence of his co-morbidities, and even his attitude to the possible scars.

How to protect against basal cell skin cancer?