Why do bones break

Osteoporosis - a progressive disease of the bonefabric in which the bones lose calcium, and with it the strength. Bones become brittle, which may lead to frequent fractures - even for minor injuries.

Why do bones break

Human bone - a living organism, in whichlive and fight two kinds of cells: destroyers and builders. Cells attached to the demolition bone surface and secrete acids and enzymes which destroy bone. At the same time from the bones into the bloodstream in small portions allocated calcium, necessary for many vital organs. As a result, cavities (gaps) are formed on the surface of the bone and demolition cells die.

Cells builders rush into these hollows andcreate the basis of a special protein, which then "walled" calcium, which captures from the blood. The gap is filled with new bone material. The process of building new bone takes about 3 months. In a healthy person p 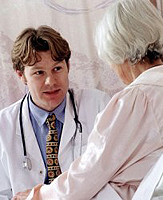 azrushenie (resorption) and the construction of the bone (bone formation) are in complete equilibrium.

In osteoporosis sharply increases activityDestroyers cells. The bone is formed a plurality of portions of destruction and cell-builders do not have time to fill all the hollows new bone material. Destroys the bone loses calcium, thins and becomes brittle.

If we look at the bone in the microscope will beIt seems that the bone-depleting substances are formed numerous holes - pores. Hence the name of the disease - osteoporosis (translated from Greek - "porous bone").

calcium reserve in the bones of a human skeletonafter the age of 30 begins to decrease. At first, the loss of bone calcium is practically imperceptible. In the female body cell activity destroyers controls sex hormone estrogen, which monitors the presence of calcium in the bones and in the end - to save it. When menopause estrogen is no longer formed in the female body, and the cells begin demolition "uncontrolled" destroy bone.

Especially enhanced bone destruction in the first 3menopausal years. At this time every year, it lost about one kilogram (!) Of bone mass (as in the average adult human skeleton weighs 20-25 kg). That is, after the cessation of menstruation a woman is losing about a kilogram of bone!

After 3-5 years of menopause, bone calcium loss is somewhat reduced, but still remains quite significant.

There are risk factors that lead toirreversible destructive processes in the skeleton and at a young age. These include low body weight, slightly built, low bone mineral density, fractures, some diseases of the endocrine system, especially the thyroid gland, surgery on the stomach and intestines eating food deficient in calcium, a deficiency of vitamin D, hormonal drugs, sedentary life, long-term (more than 2 months) to bed.


The dangers of osteoporosis

Osteoporosis is insidious: for a long time, the disease is asymptomatic, does not prove itself. Sometimes the only manifestation - back pain during prolonged standing, which is reduced when a person takes a horizontal position.
The most serious consequence of osteoporosis, and is a typical hip fracture, which often occurs in the elderly.

Independently identify osteoporosis at an earlydifficult stages. Alarms are nocturnal cramps in the legs and feet, bone pain, back pain, fractures of the hip, spine, wrist or other parts of the skeleton, widows hump - curvature of the spine forward, growth reduction (by 2-3 cm per year), the fragility or softening of the nails, premature graying. 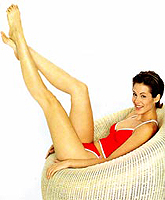 To diagnose the disease using modernsurvey methods - X-ray densitometry and. Densitometry to determine bone mineral density and thus to predict the risk of fractures and to identify the disease at an early stage. Radiography allows diagnose already at a later date in the presence of fractures.

Prevention of osteoporosis should be started already25-30 years. It is necessary to refuse from excessive use of alcohol and coffee, smoking, regular exercise, walk more, move. To treat osteoporosis, much more effective early on, without waiting for when it will declare itself broken. Upon detection of the disease is needed calcium intake and vitamin D, as well as a mandatory drugs, stopping the destruction of the bones.

The most powerful protection against bone lossprovide specific drugs - bisphosphonates. In structure, they are similar in composition to bone mineral - hydroxyapatite. Therefore, upon ingestion of these substances fall quickly into the bone - in those areas where there is a fracture, and there form a protective film. As a result, the cell-destroyer die and cell-builders continue to work. The balance between bone destruction and formation of a new restored. The stock of calcium in the body is stabilized and even compensated.

To restore bone strength, it is necessaryregularly taking bisphosphonates for a long period - 3-5 years. In this case, the bone reached a sufficient degree of mineralization and get rid of numerous pores.