Home>Other>Baby theft: where it comes from and what to do with it

Baby theft: where it comes from and what to do with it

Why do children take someone else and do not always repent of their deeds? How to prevent the cases of child stealing? 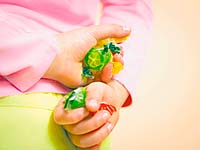 Who among us as a child, not dragged my motherdetail from a purse or grab someone else's trinket once, because it was impossible to resist the temptation? But what we are made many years ago, we tend to forget or considered insignificant. Whereas, if our own children caught stealing, we beat anxiety and think that we raise criminal element.

If you try to conditionally identify commonpatterns of child stealing, identified three main reasons that children take someone else's. (Note: it is about the children of the senior preschool and primary and secondary school age and not about kids whose moral principles have not yet been formed.)

The desire to own

Even if the child knows that to assign someone else - bad, he can not always control the impulse to become the owner desired.

Victor (12 years old) could not help secretly ateother chocolate. Boy acquitted himself in that one, and so every day eats a chocolate, so survive the day without it, and the money he always has - can afford to buy a new one. And Viti money never: parents give him cash only for specific things - give the teacher for a tour or rent once a month for school lunches. And never try to hurt a chocolate bar, because one never shares the sweet, and her mother against the independent shopping "harmful".

A child who commits a similar theft, alwaysfind a logical explanation for his behavior as a desire to have the eclipses fear of exposure. Usually these stories are terminated after being caught in the act and the test of public shame. But it happens that there is, on this later. 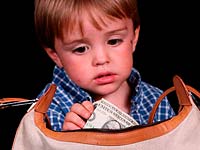 Children who do not get enough emotional response tofamily, may unconsciously start to steal, often in close. When asked about why he steals things or money, the child often honest answers "I do not know." He really does not understand why: it is often the children of wealthy families, with a decent amount of out of pocket expenses.

A casket just opened: such theft - a cry for help, unconscious request to adults to pay attention to the feelings and experiences of the child. The child just wants to be loved. Unfortunately, the way it chooses to tell the child, "immoral" and the parents, the child is not achieving a sincere repentance (and he really does not understand that he had made a very bad thing), branded his unfeeling monster.

Find your place in the team

Among the causes of child stealing importantIt takes third: the desire to assert themselves in the child's peer environment. And it is true: if a child has difficulty with the establishment of contacts, if an outsider or just shy if its social and financial situation makes it the black sheep, he will look for ways to become socially important and necessary. Even if he had to steal from their parents or other children money to treat them classmates or buy yourself the same things as everyone else.

The origins of such thefts in the same place, in the family. If parents do not notice that the child has difficulty in school or in the yard, and do not help him to cope with them, it invents its own ways, so what may. 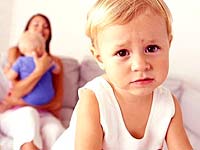 Baby theft - is extremely rare medical condition called kleptomania, requiring treatment to a psychiatrist. In 95% of cases this is a problem in the relationship with the closest people.

In fact, all three reasons are treated with a pill: attention. Only under the care meant not on duty nightly question "How was school?", And the knowledge that the child feels and thinks about dreaming that he was concerned.

If parents Viti knew how the boyshame not to have pocket money as they always have his friends, the feelings he is chocolate, which with appetite eats friend every day, they may be thinking that to solve a very simple problem. It is in such a case, the child's shame, to catch him by the arm does not always help. The child still does not have the money, that he may dispose of their own, will be more cunning and resourceful, eventually learning to steal not only chocolates but also bills.

Reason child theft - always cold andalienation in communication with others. Loneliness, inability to trust himself to gain acceptance and push the child to extreme measures. All in all, it is necessary - interested in the child's life. But not formally but sincerely, with warmth. Just - love.