Home>Other>What to do if your gums bleed

What to do if your gums bleed

Other
by admin
Finding one morning blood on the toothbrush,you probably upset. But after brushing the gums no longer bleed. This does not mean that the problem disappeared! Bleeding gums can lead to loss of teeth, and very scary, difficult to treat dental diseases. The first question to ask yourself if your gums to bleed - "Why?".

Finding one morning blood on the toothbrush,you probably upset. But after brushing the gums no longer bleed. This does not mean that the problem disappeared! our site will tell you what to do if your gums bleed, and what it can be dangerous.

Why do gums bleed? 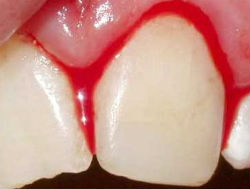 The first question, which asks a man withbleeding gums - "Why?". And it is important to answer it! Look at your toothbrush - how long have you changed it, what is its rigidity? It is easy to injure the gums, even when excessive pressing on the brush! Perhaps your toothpaste contains too aggressive components. Many of us through advertising "hooked" on whitening toothpaste, unaware of their traumatic effects on the tooth enamel and gums!

Another important point - hygiene of oral cavity. You know how to brush your teeth? How long is this manipulation? You use dental floss, mouthwash, mouth rinse if after every meal? Do you have any carious teeth? From all of these points, not only affects the health of the oral cavity, but also of the whole body!

Bleeding gums can be unbalancednutrition. People who are fond of eating carbohydrates, more likely to suffer from bleeding gums. With this power the body loses vitamins C, A, K, many important minerals - calcium and fluorine. Hypo- or vitamin deficiency is the primary cause of bleeding gums.

However, this phenomenon is observed in a number of dangerous diseases - diabetes, Leukemia, hemophilia, gingvite, periodontitis,periodontal disease may be due to uncontrolled reception of some antimicrobials. That is why, the sooner you go to the dentist with your problem, the more likely it will be your cure. 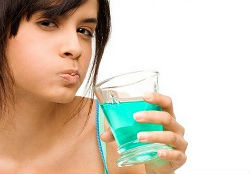 Hopefully, honestly answering all the above mentionedissues you have identified some weaknesses in the care of the oral cavity. What to do next? Draw conclusions! Give yourself 3-5 days to correct the situation. Clean, rinse your mouth, begin to drink vitamin complex (very good right now, there are men and women), watch out for power. Quit smoking - that tobacco aggravates the condition of the gums. Change the old toothbrush to brush with a soft bristle brush and toothpaste and change to a more gentle. Rinse your mouth at least clean water after each use of food.

The pharmacy has a special toothpaste forpregnant women - they are safe, strengthen gums, reduce their bleeding. I helped paste pregnadent. Bleeding often occurs in pregnant women and the elderly - their gums become loose and sensitive. Therefore pastes producers and create special series.

Try doing a simple massage gums. Wash your hands thoroughly with soap and water (not less than 20 seconds!) And massage the gums with your fingers in the direction of the jaw to the teeth, as though pulling the skin on his teeth. So you quickly improve the blood flow to the gums. But listen to advisers who recommend massaging the gums hard toothbrush, is fraught with a worsening situation.

Brew morning oak bark - buy in a drugstore andFollow the instructions. This herb has a strong astringent action, it is used for rinsing in dentistry. You can combine oak bark with chamomile or calendula - they also have an antibacterial effect.

All this needs to be done necessarily, and if youafter a few days have not noticed improvements - to make an appointment to paradontologa or your dentist! Conduct experiments does not mean eating bleeding gums were really strong, reddened gums (healthy they are pink), swollen and hard for you to eat! In such cases, even if the expert understands, makes a diagnosis and prescribes treatment!

Bleeding gums can lead to lossteeth and very scary, difficult to treat dental diseases. A friend of mine in 49 years has lost almost all his teeth. He pulled, did not go to the doctor until they earned periodontal disease, treat that is not learned! So, do not look for excuses, hurry to the doctor!

How to treat bleeding 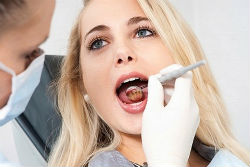 Do not think that you will torture in dentistry! Typically, special gels for topical application (eg, Metrogil Dent or Holisal) is used to treat bleeding. They have analgesic and anti-bacterial effect and rapidly improve the condition of the gums. There are drugs that increase the protective properties of the oral mucosa (Imudon). Also in the dental practice using a variety of procedures, improving the condition of the gums. You sure do clean teeth, remove tartar, cavities polechat. Only by bringing "order" in the mouth, you will be able to defeat any dental problem!

One day, standing in line at the pharmacy, I walked a man,I asked to jump the queue. And the pharmacist says - aching teeth - give something! They gave him drugs on a large sum, the man left, he said: "It is better to die, but I will not go to the dentist!". I still remember his words - it's terrible, it is necessary to overcome fear, to find "my dentist" and live without pain!

In addition to the desk procedures and implementationthe recommendations of the doctor, you have to carefully monitor the condition of the oral cavity. You can rinse your mouth with saline solution (a teaspoon of sea salt in a glass of warm water), it is good to add baking soda and half a spoon. Do not rinse your mouth is too intense, if problematic gums movement of water in the mouth should be slow.

our site wishes all healthy teeth and strong gums!