Other
by admin
Rhinoplasty - is a plastic surgery tochanging the shape of the nose. Often, it is sufficient for a complete change in human shape, because the nose - this is one of the most important parts of the face, the brightest part of it. With rhinoplasty, a person can get rid of the complex associated with the shape of his nose. 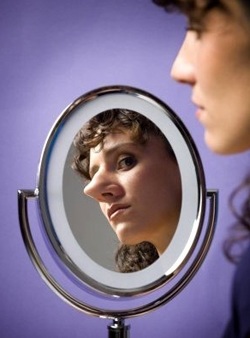 Rhinoplasty - is a plastic surgery tochanging the shape of the nose. Often, it is sufficient for a complete change in human shape, because the nose - this is one of the most important parts of the face, the brightest part of it. With rhinoplasty, a person can get rid of the complex associated with the shape of his nose. But, apart from cosmetic purpose in this operation have functional use - to improve the passage of air through the nose.

The main indication for rhinoplasty isthat the person does not like the shape of his nose - congenital or acquired as a result of injury or illness. Rhinoplasty allows you to remove or create a bump, to reshape the nose tip, change the general shape of the nose, reduce or enlarge the nose (or some of its elements), align the nasal septum (not very noticeable outwardly, but a significant effect on respiration quality), to eliminate the asymmetry, to correct racial or national characteristics.

Separately, our site would like to mentionposttraumatic rhinoplasty. If the damage of bone and cartilage skeleton is better to consult a doctor in the first 10 days after the injury - then the likelihood of adequate recovery is much higher, and the load on the body is less - no need to break down what has already become incorrectly grow together, just enough to shape what has already. 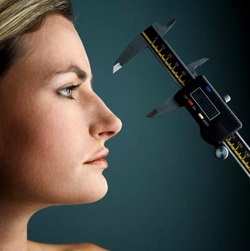 Contraindications for rhinoplasty can be divided into two groups - when they simply can not, and when it is possible, but not much use.

You can not - in fact, in all cases, whencontraindicated in any operation. This diabetes, cardiovascular diseases, internal organs, infectious diseases, oncology, as well as bleeding disorders.

It makes no sense - up to 18 years apartposttraumatic rhinoplasty or correction of nasal breathing. This is due to the fact that the bone and cartilage of the nose continue to grow, and the high probability that the nose still change its shape, and consider how it is, is not possible.

As with any kind of operations are also possible during rhinoplasty some complications.

In the first place there is a discrepancy between the receivedthe results of the patient's expectations. Firstly, completely predict the result of the operation of this type is practically impossible. Secondly, it is one thing - to admire his face with a new nose on the photos or computer screen, and quite another - to see every day is a face in the mirror, and even watch the reactions of others, which is not always such as we would like. our website warns: return to the old nose is almost impossible - it is possible to make a new operation, but its result is also not guaranteed, and several operations in a row will not benefit your nose. Therefore ponder well the need for such operations, and, determined to carefully choose a specialist, who will entrust his face and nose in particular.

With other possible complications are mucheasier. Sometimes, depending on the individual characteristics, after rhinoplasty there are grave internal scars - they are removed surgically, and breathing is restored. There are problems and with scars on the face - at the open method. They are removed in the same manner.

Occasionally there are problems with blood vessels or nerves, but with sufficient skill of the surgeon and the adequate behavior of the patient during the recovery period, their probability is almost equal to zero.

How to choose a clinic 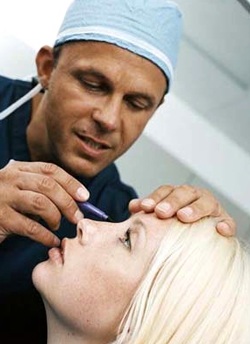 The first is to draw attention to the clinic documents, and specifically the doctor giving the right to such operations. If you refuse to submit to review - hence, it is something wrong.

Ask also show you a selection of photographs"Before and after", pay attention to cases similar to yours. Well, if someone you know is already was operated at this doctor, and was pleased - but only if we are talking about rhinoplasty, because generalists doctors are rare, and the fact that the surgeon is well inserts the implants does not mean that it is capable of give a nice shape to your nose.

According to our site, it is no less important and otherEvaluation criteria of a specialist. A good plastic surgeon is also required to be an artist and psychologist to a certain extent. If a doctor immediately and bezotgovorochno agree with everything that you want it to do - do not trust him. It must take into account the individual characteristics of your face, so that the new nose was not "nice in general", and beautiful and harmonious look is on your face. Also keep in mind that the nose - is not only decorative, but also functional element, and it should not decrease significantly impede breathing.

A good clinic will show you the expected result by computer simulation, and be sure to give some time to think, will not rush with the decision. 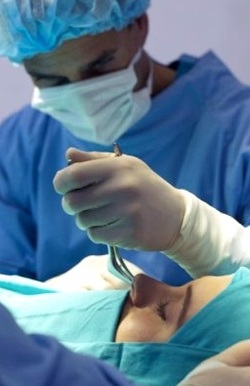 It's hard enough to outline methods of modern rhinoplasty - each surgeon a set of techniques that together help to achieve the desired result.

Rhinoplasty, depending on what you want to change itself (the tip of the nose, remove a small hump, straighten the nasal septum, etc.), can be bone, cartilage or bone and cartilage.

According to the method of operating is rhinoplastyopen and closed. Open - is when the surgeon makes an incision under the nose, lifts the flap and actually underneath and corrects. The main advantage of the method - the doctor sees what he is doing. Closed rhinoplasty is performed entirely through incisions inside the nostrils. This method quickly restored exterior, and the patient can sooner return to social life - but there is a price increase in the risk during the operation. What is the method to use concrete in your case - it's up to the surgeon depending on what your nose, and what you want as a result.

Some clinics also use a laser instead ofscalpel to reduce traumatic procedure. Fundamental differences in operation it does not contribute - of course, if the surgeon has the appropriate skills.

Preparing for rhinoplasty fundamentallydifferent from the preparation for any operation under general anesthesia. In the two weeks prior to surgery should stop taking medications that affect blood clotting - such as aspirin, Antitussives, etc. The day before surgery - discharge day (there are few, and only a light meal). On the day of surgery is best not to eat anything or drink. In some cases, your doctor may recommend 2-3 days before the operation to take medicines that strengthen the blood vessels (eg, Ascorutinum).

In the case of the common cold or rhinoplasty menstruation postponed for a more favorable time. 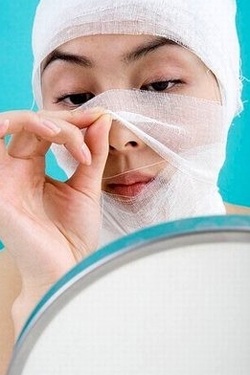 The first couple of days after the operation will have to breathemouth - the nose at this time is completely filled with support form (postoperative and absorbing allocation) tampons. On the same side of the outer shape of the nose is holding a special plaster (or other, lighter solids) dressing in the form of a butterfly. This bandage should be worn a week or two - depending on the individual case. It is understood that while such a bandage on his face, neither of which social life can not be considered, especially because the face after surgery swells, and the swelling goes also for about two weeks (although mild swelling can hold up to six months, but it cosmetics can disguise).

After removing tampons adequate nasal breathing is not restored immediately, too: the internal swelling can stay up to three months.

The first time after rhinoplasty is betterbed with headboard upbeat - so quickly descend swelling. It is also necessary to limit the physical and emotional burden - that there was no nasal bleeding. At least one week should abandon hot or cold foods. our site is particularly emphasizes the point that the first six weeks after surgery can not wear glasses - not even light can deform the rim of the nose until it has healed completely.

Usually the first 2-3 days the patient spends in the hospital- In order to avoid complications following rhinoplasty, as well as psychological comfort. Tampons are then retrieved and the patient is sent home. Sometimes after tampons to maintain the correct shape of the nose is inserted into the nostrils special soft polyurethane tread-plate. They are not visible from outside, almost no difficult breathing and removed three weeks after surgery.

During external wear bandages can take a cool (not cold and not hot!) Shower and bath, but so that the dressing remains dry.

After removing the plaster cast can be usedmakeup - but it must be applied very carefully to avoid damage to the nose. It is also worth remembering that after the tests carried forward nose skin care benefit, rather than masking.

Cosmetic procedures (such as peeling) can be carried out not earlier than three weeks after rhinoplasty.

To sports or other physical activities you can return no sooner than 3-4 months after rhinoplasty, but it should be about a year to protect the nose from injury.

This is most necessary that is requiredknow and remember wishing to make a plastic nose. In each case, the methods and feasibility of rhinoplasty in general is discussed individually. Remember that beauty is better not to save and access to experienced specialists, because even they do not always work out the operation without its subsequent complications. Even the surgeons with considerable experience in their practice, there is a small percentage of failures. Therefore, all the same do not hurry and think twice, because we are talking about your face.