What do you get after tasting sushi

Sushi or sashimi - attribute of the modern fashionlife. This stylish, affordable, finally, low-calorie. But before brilliantly absorbing rolls and raw eggs wooden sticks, consider whether this is worth the candle game of secularism.


Raw fish - the classic source of helminth(Worms) - parasites that are dangerous to humans. Piquancy gives that looks infected fish is no different from healthy. Today, we list the most driving the disease, which can be picked up, dine raw fish.

The taste and color, as we know, no friend. The inventors of sushi - Japanese - stubbornly believe that cooking will spoil the taste quality of the fish. But Helminthologists own truth. Fans of Asian cuisine at risk of infection in the first place and opisthorchiasis diphyllobothriasis. 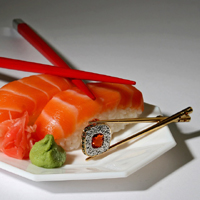 Opistorhisov "guest" in a damp, poorly cooked, andunderdone fish and salted carp species. The main foci of the disease are in the Dnieper, the Desna, the Ob, Irtysh, Volga, Kama and its tributaries. In short, almost all the places where we carry to the fish.

I think gourmets-yaponista be interested to know,opistorhisov that adult parasites in the bile ducts of the liver, gallbladder and pancreatic ducts. The average size of helminth - 7-12 millimeters.

The main symptoms - weakness,nausea, pain in the right upper quadrant, enlarged liver. If in a week or two after the gatherings in sushibare you overcome these ailments, immediately make an appointment in the office of Parasitology.

Diphyllobothriasis (broad tapeworm) - a thing no betteropisthorchiasis. This helminthiasis wherein settle parasites in the small intestine of man. The source of infection in this case, perch, pike, burbot, but what is most unpleasant - the Far East salmon and (to a lesser extent) whitefish. In short, our favorite red fish.

Broad tapeworm parasite in the human body10-20 years, growing at the same time up to 15 meters or more. Signs of such a guest - the defeat of the gastrointestinal tract and the periodic discharge of the body of the helminth, sorry, with the faeces. If a long time not to notice, you can earn a deficiency of vitamin B12, which is colloquially referred to as chlorosis. You have not lost the desire to snack sushi? Then another disease as a dessert.

These examples may seem thatinfested with parasites only fresh water fish. In fact, worms great feel inhabitants of the sea. Among infections "sea" refers anizakidoz parasites - a disease that excite larvae roundworms and hookworms.

These worms affect almost all kindsmarine fish - cod, herring, perch, salmon and squid, octopus, shrimp and other crustaceans, shellfish ... And run into the infected fish easy.

According to statistics, herring in the Baltic Seainfected with nematodes by 30 per cent and in the North - all at 55-100 percent. Anizakidoza cases recorded worldwide, but mostly in Japan, Korea and Taiwan: it is the tradition prescribe eating raw fish in these countries.

Familiarity with nematodes may endtragically. These creatures can contribute to the development of acute ulceration with perforation and necrosis of wall of stomach and intestine. The incubation period of the disease lasts from 4-6 hours to 7 days. The clinical manifestations of the standard - nausea, vomiting, abdominal pain, fever, rash, diarrhea. Often the disease is detected incidentally during endoscopy or biopsy.

What should you do to avoid becoming a living incubator for parasites?

The answer is banal: the fish should be decontaminated - freeze, salt and thermally well treated.

So, for the decontamination from larvaediphyllobothriids fish must withstand a temperature of minus 18 degrees for 36 hours, at a temperature of minus 27 degrees - 12 hours. With Ambassador easier. When you are strong enough to withstand the saline solution should be fish in it for at least 14-16 days. Cooking fish should last at least 20 minutes after boiling, cook the fish should be 15-20 minutes.