To worms in the intestines? The new treatment - parazitoterapiya

Call dainty pile of squirming white larvae no sane person does not risknet. But the cure - please!


Increasingly, researchers provide evidence thatdeliver humanity from many ailments can be ... ordinary worms. Inquiring scientific minds have long noticed that in the backward countries, where the local population is almost completely infested with parasites, people do not suffer from severe immune disorders.

For example, people living in harmony with infestinghis intestines Ascaris and pinworms - but bronchial asthma or rheumatism, he did not threaten. Pick up other worms (strongiloidov) - hepatitis B and certainly not ill.

At first, researchers have tried to write off all the troubles of civilization: our immune system are weak constant stress and bad ecology, which are unfamiliar people in developing countries. But…

Contagion to the contagion ... 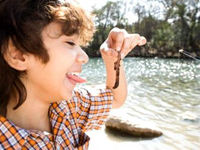 Much more convincing proved another explanation.

- Parasites somehow eliminatetimes-balance in the immune system - says Professor Alexander Brontshteyn, head office and parasitic tropical diseases Infectious Clinical Hospital № 1, department head of modern methods of treatment of the Institute of Medical Parasitology and Tropical Medicine. Martsinovsky. - Perhaps, secrete specific substances that enhance the body's defense. Therefore the idea of ​​using for the treatment of parasites. But not everyone, but those that are not only easy to catch, but also just as easy to banish from the human body.

The new method is undergoing parazitoterapiithe last "run" in international clinical trials. The number one contender for the title of modern medicine - whipworm. It's not too dangerous and fairly common parasite that prefers to live in a human in the cecum.

To catch them in everyday life easily - sometimesenough to eat unwashed vegetables or fruits. And in everyday life to be treated for it should be mandatory, because it can provoke the development of appendicitis. But if you have, for example, ulcerative colitis - is specifically infected. Irrefutably proven that the newcomer of the disease much easier, ulcers begin to tighten, and the patient will soon recover substantially, which make using traditional medicine, it is impossible.

The diagnosis of "Ulcerative Colitis" means lifethe use of tablets, which are nevertheless a little help from the excruciating pain. For the average person seems to be terrified - to know that somewhere inside him crawling worms. But patients are ready for it - if only to get rid of suffering. Especially that bring whipworm elementary - one tablet. And infect patients with human parasites (they are hard to get in the lab), and pork, which is even less dangerous to humans.

In the battle, code-named "against wormshay fever "victory, apparently, also will win first. The researchers found that with the advent of hookworms in the body - so called these useful for people with allergies parasites living in 12 duodenal intestine - are shortness of breath, watery eyes and other allergic reactions.

Of course, the harm caused by parasitic worms nobodyI canceled. They retard the growth, mental and physical development of children, some provoke tumors, doing a real infection with tuberculosis and AIDS, prevent the development of a good immunity by vaccination. That is vaccinated, the presence of these "sponger" in the body, are almost useless. Those hookworm can cause iron deficiency anemia.

Do not be confused: lack of hygiene (dirty hands, unwashed fruits and so on. p.) has no relation to the treatment! Procedure podsazhivaniya parasites in the body looks like. The patient drinks a special drink, which float helminth eggs. In humans, these parasites do not replicate, and as soon as do their job, they "asked" to leave.