Home>Pediatrics>Games for children with hyperactivity syndrome

Games for children with hyperactivity syndrome

What kind of games you can play with the children with the syndrome of hyperactivity? This article describes the rules of the 6 games that can captivate your child.

Goal: develop the ability to focus on details.

The child draws any simple picture (cat, house, etc.) And transmits
it an adult, and he turns away. Adult dorisovyvaet more
and returns the image parts. The child must be noted that the changed
in the figure. Then, an adult and a child can turn the tables.

The game can be performed with a group of children. In this case, the children in turn
draw on the chalkboard a picture and turn away (with the possibility
movement is not restricted). Adult dorisovyvaet few details.
Children looked at the picture, you must say what changes have occurred. 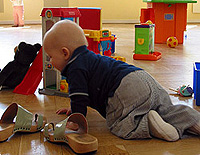 Adult 6-7 picks up small objects of different textures: a piece
fur, brush, glass bottle, beads, wool and so on. d. All of this is laid out
on the table. The child is invited to bare arm to the elbow; educator
He explains that the hand will walk "animal" and touch
gentle paws. It is necessary to blindly guess which "animal"
touches the hand - to guess the object. Touch should be stroking,
pleasant.

Game Option "animal" will touch the cheek, knee,
palm. You can swap places with the child.

All the children stand in a circle. Leading rolled into the center of the circle one by one
tennis balls. Babies communicate rules of the game: the balls must not stop
and roll out of the circle, they can push the hand or foot.
If the participants are successfully meeting the rules of the game, leading roll in additional
the number of balls. The meaning of the game - to set the team record for most
balls in a circle.

Sitting on stools or standing in a circle, trying to play as soon as possible
pass the ball without dropping it, a neighbor. It can be as much as a fast pace
throw the ball to each other, or pass it on his back in a circle
and removing his hands behind his back. To complicate exercise can be asking children
play with your eyes closed, or use multiple game
balls.

Goal: a game with clear rules organizing, disciplining children, rallies
game that develops the speed of reaction and causes a healthy emotional
climb.

Children stand face to the lead. Under music from the beginning of each cycle, they
Repeat the movement, which shows the host. Then, one is chosen
a movement that can not be performed. Whoever repeats a prohibited
movement out of the game.

Instead of showing the movement can be called aloud the numbers. games members
repeat all the good numbers, but one of the forbidden, for example, "five" figures. When the children hear it, they will have to clap
hands (or wander on the spot).

The provider puts a cap chicken and says that all children - "chickens"
- Live with her mother-hen in the hen house. Coop can be designated
soft blocks or chairs. Then the "chicken" with the "chickens"
walking (walking about the room). As soon as the teacher says: "Vulture"
(Pre-children held a conversation, during which he explained,
who is a kite and why chickens should be avoided), all children
run back into the "chicken coop." After that, the teacher chooses
another "chicken" in the number of children playing. The game is repeated.

In conclusion, the teacher invites all children to get out of the "chicken coop"
and walk softly waving his arms like wings, dance together,
jump. You can have the children look for "chicken", which
I lost. Children with teacher looking for a pre-hidden toy
- Fluffy chicken. Kids with teacher considered a toy,
stroked her regret and carry into place.

In order to develop motor skills can complicate the game follows
manner. In order to get into the house, chicken coop, children should not just
shoot in which is it, and crawl under reechku at a height of 60-70
centimeters.