Magnetic designer for children - a universal thing, intellectually develops and ... kills our children. Why is this sophisticated weapon, this deadly toy can be free to buy in a children's store? 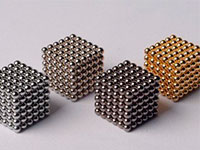 As it should be the most sophisticated weapons, the Neokub is fascinating simplicity and amazes the scale of its possibilities, allowing you to realize the most bizarre forms and fantasies. The designer is made of neodymium, iron and boron alloy, manifesting the properties of a supersensile magnet. Such magnets are used, for example, in medicine, in magnetic resonance tomographs, but the horror is that this technology has formed the basis of children's toys. Tiny, like confectionery sprinkle Silver magnetic balls of neurocuba attract to each other with an incredible force, which allows the child to simulate the most different structures, thereby developing the shallow motility of the fingers and creativity.

Magnetic designers for children are presented as educational toys, in fact, it is. Growing out small items, in this case, magnetic balls, the child will use the shallow motility of the hands, developing the hemispheres of the brain. The designer does not impose any forms to the baby, you can collect the most bizarre figures from small balls, a small designer embodies its fantasies into life, copies the objects known to him. However, the good goal overshadows global harm who can cause a magnetic toy.

Buying a magnetic designer to children, parents do not take into account their age and behavioral features. The child masters the world through the senses and therefore, even in 3-4 years, the habit continues to pull in the mouth. Weak children's fingers are sometimes not able to overcome the power of attraction of small magnets and the baby has to separate each other's balls from each other.

On the sets of magnetic balls, the neocub is indicated by age limit «Over 14 years old», However, what prevents the baby to swallow magnets from a set of an elder brother, just find them at school or in kindergarten?

What is the danger of a children's magnetic designer? 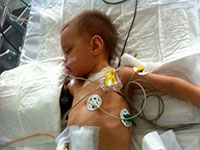 Even in the body, magnets remain magnets, the balls with force are attracted to each other. Clamping among themselves intestinal fabrics, they lead to death and education «hole» In the walls of the gut. As a result of intestinal content in the abdominal cavity, severe peritonitis develops.

The symptoms of peritonitis in children in the early stages are similar to the manifestations of rovotirius infection, the intestinal syndrome often accompanies the flu, paragripp, adenoviral infection, so the diagnosis is often set with a delay. The child is being treated for a long time and persistently from ARVI, and only when his condition becomes truly heavy, turn to doctors.

One of the main conditions for successful treatment of peritonitis is the diagnosis of the causes of its development. Sometimes parents do not even suspect that the baby swallowed the part of the magnetic designer and cannot tell the director's direction to doctors. In the presence of a clinical picture of a sharp belly more often resort to ultrasound, but only x-ray research is capable of shedding for the causes of tragedy. The situation develops rapidly, the loss of precious time is fraught with the development of sepsis and death.

Not so easy to cope with the problem, even if the cause of peritonitis is revealed. If a child swallowed a few magnetic balls, his intestine is literally exhausted. Numerous «Hole» You still need to find, for this, surgeons have to sort out the centimeter behind the centimeter of the loop of the intestine, removing its affected areas. As a result, the baby becomes disabled for life.

But this is not all, even if the child does not swallow the magnetic balls of neocuba, in any case, the strongest magnetic field is affected by it, in its capacity superior all permissible safety levels. Than it is fraught for the baby, it remains only to guess. 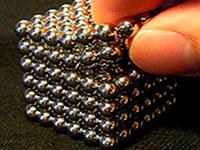 Sad statistics show that the number of victims of the magnetic designer for children is growing every year. According to Leonid Roshal, only for 4 months of 2011 in the Research Institute of Emergency Surgery and Traumatology received four kids swallowing the ill-fated magnets.

Inventors of magnetic toys, Americans, banned them selling them in their country. On the official website of the American manufacturer, the neurocuba posted a call to get rid of toys immediately.

Several tragedies with our children stirred by the Russian public, but the neocobe can still be free to purchase at any store. Moreover, the magnetic toy is produced by our same «relatives» Enterprise and stop «fatal» no one is going to stream.

Neodymium, part of the balls, is not prohibited for use in the production of children's toys, it is not in the list «Dangerous» Ingredients, which means he «in law». Ball manufacturers believe that the death of several children — Not a reason to stop the release of designers, because swallowed batteries and buttons are as dangerous. True, they are not written on them that they — children's toys, but the balls turn out to be in the hands of kids quite reasonable. Of course, you can limit the use of magnetic designers 14, 18 years, but who can be sure that the balls will not fall into the hands of the kids.

While the problem with the neocube and similar toys will somehow be solved at the state level, there will be a lot of time, and it is important for parents to protect your child today and now.

What can be done? Of course, close the door in front of the murderer's nose! But if the house has already started magnetic «infection», You need to be alert. It is possible to determine that the ball can be in the body of the child using a compass or a magnetometer, its arrow will deviate if there is a magnetic field in the belly of the baby, and this is a signal to immediately appeal to the doctor.